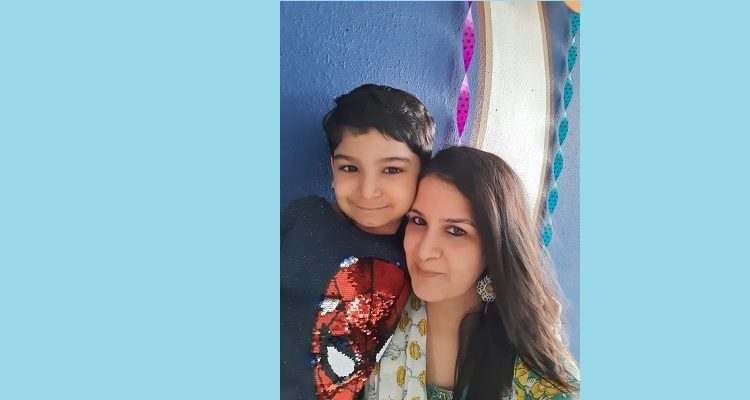 According to a study in The Lancet, about 50,000 children up to 19 years in India suffer from cancer each year. With the increasing incidence of cancer in children, Rakhi Bathija shares her heartbreak, her coping strategies as she helped her son Anshul through his illness and ends with some suggestions for others on the same journey

Cancer. This word is synonymous with danger, deadly, evil, something that is destructive and leaves you devastated and helpless. I had heard many people having gone through this dreadful disease. Little did we know, we will also have to face it one day; and that too in our 5-year-old son, Anshul.

In May 2018, when Anshul was 4 and a half years old, he developed persistent fever. Several blood tests could not pinpoint the underlying reason of the fever. That’s when we were first told that it could be cancer and a bone marrow biopsy had to be done to ascertain the same.

Hell broke loose on the family. As a mother, I couldn’t accept that it could be it and was in a state of denial, accompanied by trauma and insecurity. It couldn’t be possible, I was sure!

Fortunately, or unfortunately, our first round of tests in June 2018 turned out to be negative. The irony was that, though we were happy that he didn’t have cancer, he still continued to have fever and was still undiagnosed!

Here, I would like to emphasise one very important fact. During this phase of hospitalisation, I was in the deepest anxiety ever. Scared, anxious, depressed, unstable and very very vulnerable and emotional.

Little did I realise, that Anshul was emulating my emotions and feelings. It is a scientific fact; children are connected to their mother’s vibes. And so Anshul was going through every emotion that I was going through. He was extremely uncooperative and scared. He would scream and tremble at the very sight of a nurse or a doctor. Those 10 days in the hospital were the worst ever for both of us for the emotional trauma that I passed on to him.

Pre-diagnosis- The stage of acceptance

This phase was after the initial round of testing where he still had fever every day for the next six months. We consulted a naturopath and worked on his diet. I quit my job, deeply immersed myself in prayers and the only focus in life was now to get my son through this.

For six months every single day, I would check his fever three times. And every single time my heart would sink as it would record a high temperature. WHAT WAS THIS???? IF NOT CANCER, THEN WHATTTT???

“Oh God, if it is cancer, then please let it get diagnosed and let my son get the required treatment!” – This is what I found myself thinking one fine day. It was like choosing between the devil and the deep sea. Having cancer and getting it treated is better than going through the pain of an undiagnosed disease for several months!!!! If it is cancer, so be it!

This was my phase of ACCEPTANCE!!!

In December 2018, he was finally diagnosed with acute lymphoblastic leukaemia (a form of blood cancer). To my own surprise, I was actually relieved that a diagnosis had finally happened. We now had a direction, something to work towards. My son would now be given treatment, at the end of which there was hope. We were out of darkness and IT WAS ACTION TIME NOW!!!

This time, I made a firm resolve…. that my son would always see a smile on my face. We knew the journey ahead was tough, and we didn’t know the end result. But, what I did know was that the journey would be a lot smoother if we went through it gracefully. We had no choice, the disease was not just going away, and we had to go through the treatment.  So might as well go through it gracefully.

Anshul was initially not informed that he has cancer or the seriousness of the disease. We told him that his immunity was low, and that this treatment was going to make him a strong boy.

We informed him that this treatment would last for about 7-8 months, at the end of which he will be able to live a normal life. We gave him hope and told him this was just a temporary phase.

Because of the frequent hospital visits, we went easy on his screen time. This helped to divert his attention and also killed boredom to quite an extent. I used this free time to inculcate reading in him. I read out several stories to him which he thoroughly enjoyed.

There were times which were extremely difficult, like vomiting, loss of appetite, hair loss and more. Every time he threw up, we would crack a joke after that, not making a big deal out of it. Our motive was not to make him feel that he was going through something serious.

We also showed him the positive side of all this… like he would get to watch a lot of TV and play video games, no homework or studies. This really helped him a lot.

When Anshul started facing hair fall and had to shave off his head, my husband also got his hair shaved off in front of him. This not only gave my son the strength to do it, but also made him feel like a normal person.

To keep the atmosphere lively in the hospital, we mingled with the sisters and the housekeeping staff, who also responded wholeheartedly and lovingly. Anshul extended full cooperation during the treatment.

Once again, I will highlight the fact, that children operate at the same vibrational frequency as everyone around them. The child reflects the same state of mind as his parents. We were mentally stable, and so was Anshul.

How did I manage myself?

Going through this rigorous treatment can be very depressing for the family member to a point of insanity. Since I was the primary caretaker of the child, I knew that I had to take care of myself in order to take care of him. I had to be physically and mentally fit. I would consult my spiritual mentor who would advise me on many things on a regular basis.

I kept my diet simple making sure that I don’t fall sick. In the limited time that I would get, I would do chanting (sound-based meditation) to keep myself sane and upbeat. Doing this gave me immense strength to face the difficulties with poise and sanity. Now when I look back, I feel amazed at the sanity with which the whole situation was handled.

Our children get affected by the emotions and feelings of the people around them. Children’s emotions are directly connected to their parents, particularly their mother’s state of mind. If the mother is worried, anxious and impatient, so will the child. But, in these stressful times, how do we keep our calm and remain mentally stable?

Well, what I did, was a lot of chanting whenever I would find the time to. Equally important are prayers, blessings and healing which act like a catalyst in the journey. These give us hope and keep us anchored. Wherever your belief lies, one MUST immerse into prayers and meditation and harness the positive vibrations of the Universe! Besides, doing so has no side effects!

Anshul is now in the last six months of his treatment. He has resumed schooling, joined football (during the non COVID days) and drawing classes and is an active player and runner with his friends. I don’t know what the future holds for us, but I do know that we can make the present more beautiful for everyone around us!