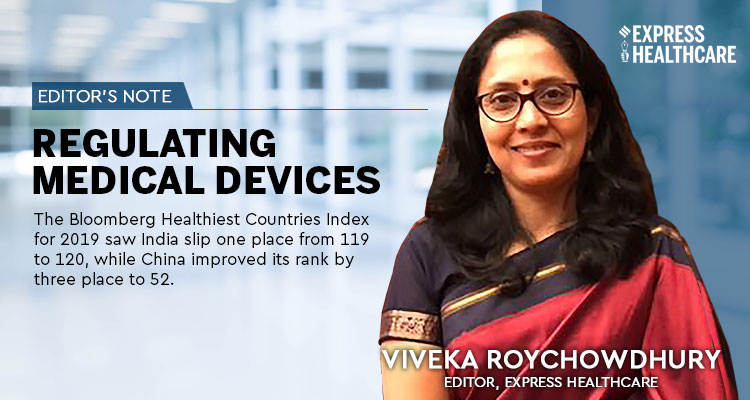 The Bloomberg Healthiest Countries Index for 2019 saw India slip one place from 119 to 120, while China improved its rank by three place to 52. Sri Lanka, Bangladesh and Nepal rank significantly above India but one could argue that India’s sheer geographic size and population add multiple layers of complexity to the issue. Hence, a comparison with these three nations may not be fair.

The ranking compared 169 countries, and took into account criteria like life expectancy, and also downgraded countries for unhealthy habits like tobacco use and obesity. The rankings also considered environmental factors such as sanitation and clean water, according to a report. It will be interesting to observe how fast recently launched health schemes like Ayushman Bharat – Pradhan Mantri Jan Arogya Yojana (PM-JAY) impact such rankings. This scheme has reportedly delivered treatment to more than 12 lakh people in the first 150 days since its launch last September.

India’s slip in the Healthiest Countries Index is minor and cannot negate many gains in terms of MDGs. Also, the devil lies in the details and we’d have to know more about the exact methodology before we pass final judgment.

Rather than knee jerk reactions to such rankings, we have to take a more holistic view. Regulations and policies are long-term measures and take time to be framed and implemented. In a country like India, the consultative approach, a hallmark of democracy, adds checks and balances, which are very crucial especially in healthcare. But the flip side is that arriving at a consensus among different stakeholders add layers of complexity. The process of listening to each stakeholder and finding a balance could take months and even years.

For instance, experts in medical devices manufacturers’ associations like Association of Indian Medical Device Industry (AiMeD) and patient groups have been on opposing sides of the fence in debates on medical devices regulations. The latter group has sometimes accused the regulator of not listening to their side of the story.

But when the health ministry recently released the draft of the medical devices regulations in mid February, both sides were united in pointing out the flaws. In a press note dated February 9, AiMeD hailed the outcome of the first meeting called by the Central Drugs Standard Control Organisation (CDSCO) India’s national regulatory authority for medicines and medical devices. The meeting had participants from both overseas and Indian manufacturers and AIMED’s press note said the discussions on the road map to regulate medical devices was ‘applaudable.’

But a day later, the CDSCO released a notification which apparently went against this understanding. In a press note dated February 14, Rajiv Nath, Forum Coordinator, AiMeD said that the notification released the same evening of their February 8 meeting, was in conflict with their discussion regarding a phased step-by-step approach. The association says there is no logic to the choice of devices regulated in the notification. Secondly, the deadline of 2020 is too short and AiMED has recommended that at least five years should be given as a transition phase. The rationale is that this transition phase is required for both industry to put in place the infrastructure as well as the regulatory departments to scale up inspection labs etc.

AiMeD followed this up with a tie up with the Association of Healthcare Providers (India) (AHPI) to promote the India Certification of Medical Devices (ICMED) Scheme, touted as the country’s first indigenously developed international class quality assurance system for India manufactured medical devices. The medical devices sector is going the same way as the pharmaceutical sector, where global norms like those of the US FDA for good manufacturing practices, take precedence over national norms. The difference is that the US FDA GMP inspections are for facilities exporting to the US. Local medical devices players argue that local certifications should be applied for locally used devices. But hospitals and doctors seem to mistrust devices which meet only local certifications and prefer to use imported devices which meet global norms. The issue will need to be addressed both on the quality and price front. The medical devices industry should learn from the experience of the pharma sector, where there is concerted move to move towards harmonisation of global GMP standards.

Ultimately, all segments have to keep the patients in mind. Whatever adds value to the patient will add a competitive edge to the stakeholders in the long run.

Online Consultation for Paediatric Care grows at 250 per cent year on year: Practo