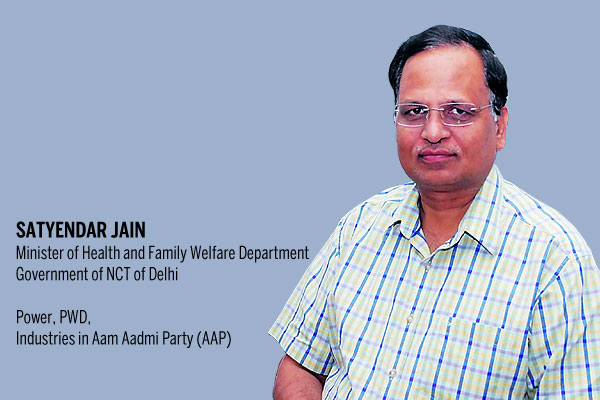 Satyendar Jain, Minister of Health and Family Welfare Department, Government of NCT of Delhi, who is donning several other portfolios of Power, PWD, Industries in Aam Aadmi Party (AAP), elucidates about Delhi government’s three-tier healthcare system, mohalla clinics, polyclinics and multi-speciality hospitals and how it is improving the healthcare infrastructure of Delhi

Can you list out the various initiatives taken by AAP government towards betterment of healthcare sector in the NCT?

The most important achievement on the health front made by us is the starting of mohalla (neighbourhood) clinics in Delhi. These clinics have been conceptualised as a mechanism to provide quality primary healthcare services accessible within the communities in Delhi at their doorstep, and help de-congest crowd within government hospitals. We have set up 158 clinics so far and will  open 1000 clinics soon. Next to mohalla clinics, we have multi-speciality polyclinics, which focus on secondary healthcare in the form of OPD consultation by specialist doctors, including diagnostics.

We have opened 25 clinics and our target is to have 150 such polyclinics. Right now, the mohalla clinics and polyclinics are functioning upto 10 to 15 per cent only, but if they are fully functional it will help de-congest government hospitals. Unlike any other metros, Delhi’s government hospitals are facing huge crowd. In 2015, the government hospitals in Delhi registered 30 million OPDs. In 2016, it was 40 million OPDs and in 2017, we will cover atleast 50 million OPDs. We are providing free of cost medicines and tests, so many are coming from nearby states as well. Increased OPDs itself showcases that the services have been enhanced. For example, the Delhi government has tied up with certain private labs which conduct MRI, PET scans and ultrasounds for free for its citizens where we pay for them. Till now, over 5,000 scans have been conducted in these labs per month.

According to you, AAP’s mohalla clinics have gained huge achievements. Do you think the rationale behind this initiative is met?

Thanks to the BJP and Congress, we are facing a lot of hurdles in coming up with the mohalla clinics. The government is not providing land for mohalla clinics, for which we are approaching every department. Despite all these hurdles, setting up 158 clinics in two years is a big achievement and 1,000 is an ambitious target. We are sure that we will achieve it. Compared to earlier governments in Delhi, which have just set up about five to seven dispensaries per year, I hope we are serving better to our citizens.

Many don’t understand the concept of mohalla clinics. It is a simple concept developed by AAP, which is being explored by many others now. The idea was to provide diagnostics and treatment of simple ailments to people and reduce the footfall in tertiary care hospitals. These clinics within a 5 km radius from their home offer over 100 essential drugs and 212 diagnostic tests which are absolutely free. The doctors in these clinics treat minor ailments such as fever, headache, diarrhoea, skin problems, respiratory problems etc., first aid for injuries and burns, dressing and management of minor wounds and referral services.

With this, doctors in government hospitals can focus on complicated diseases and surgeries. Services are good in every mohalla clinics. In Delhi, we are lucky that we have enough doctors as it is the only metro in India which has a better doctor-patient ratio with 50,000 doctors around. As for cost, construction of 1000 mohalla clinics is estimated at Rs 200 crore and its operation per year costs Rs 400 crore. For existing 158 clinics, the operation cost comes to around Rs 30 crores.

On an average, how many patients from outside Delhi do government hospitals caters to?

It is very difficult for us to manage increasing crowd in hospitals. The number of patients visiting any government hospitals in Delhi is increasing manifold every year. Earlier, the ratio of patients visiting from outside Delhi was 50 per cent, but nowadays over 70 to 80 per cent patients who approach Delhi government hospitals are outsiders. The rush has doubled and the Centre is not providing any help. They don’t even pay share from the income taxes collected in Delhi. As far as the upcoming new AIIMS are concerned, it is over three years since BJP has won the elections. Whatever they had to deliver in five years has not been done, they are trying to open AIIMS here and there. Let’s wait and see what they manage to deliver.

Delhi’s budget of Rs 5,736 crore for healthcare is appreciable. But how have you utilised it? What is the progress so far?

Delhi government’s prime sectors are education and health. We are spending 25 per cent on education and over 12 per cent on health and our budget reflects it. Already, 17 hospitals are in various advanced stages of renovation and their infrastructure is being upgraded. Right now, we have 10,000 beds in these hospitals but we are trying to add 15,000 new beds. We expect to cover all the hospitals in the next two years. The three-tier healthcare system, mohalla clinics, polyclinics and multi-speciality hospitals is improving healthcare infrastructure of Delhi.

Can you explain about the new Good Samaritan Policy?

We will implement Good Samaritan Policy by the end of this year. The reason and need for implementing it is to encourage people to help road accident victims. Every year on an average 1600 deaths occur on Delhi roads. Many don’t reach hospital on time. Under this policy, monetary incentive of Rs 2,000 and appreciation certificate will be given to those who help road accident victims reach hospitals. If a victim is admitted in a private hospital, the hospital expenditure will be borne by the Delhi government.

What is your view on Public Private Partnership (PPP)?

We do PPPs in a smart way. For example, we collaborate with various private players and pay them in Central Government Health Scheme  (CGHS) rates. As private players have their own lab space and they have installed their scanning machines, we are utilising their services and paying them CGHS rates and not paying any capital expenditure. We have started scheme of operations in private hospitals. If a patient is waiting for over a month for a surgery in Delhi government hospital, he/ she will be referred to any of the enrolled 50 private hospitals which is NABH accredited and have CGHS facility. Right now, we have a list of 52 surgeries, which are performed by private hospitals. The Good Samaritan Policy, which is an accident victim scheme will have over 330 private hospitals, nursing homes as our partners. I hope these can be the best examples of PPPs in healthcare.

If you have to pick few states for its best healthcare services pan India, which ones would you mention and why?

I would say Kerala and Tamil Nadu. As everyone knows about Kerala’s health indicators where they have the least infant mortality rate and maternal mortality rate (MMR). The atmosphere of government hospitals in Kerala is calm and there is no stress. Moreover, the state has high literacy rate, which compliments better healthcare delivery. Tamil Nadu is another state, which has also done reasonably good in healthcare.

If you have to rank Delhi for health performance, how much would you give out of 10?

What is your take on NEET? Do you think it will help in medical education?

National Eligibility Entrance Test (NEET) exam will eliminate corruption because in most of the states local examinations are rigged in large scale and people take medical seat by paying money. Many politicians don’t like this idea because most of the medical colleges are run by them. But Delhi government supports NEET.

What initiatives have been taken to control vector-borne diseases?

You seem to be surrounded by controversies. What do you have to say about the appointment of your daughter who was put in charge of Delhi mohalla clinic and designated as an advisor to the health secretary-cum-mission director of the National Health Mission?

I fight with big, powerful people and they gift me controversies. For example – we started giving free medicines scheme for many people in Delhi, the diagnostic tests rates, test rates for vector-borne diseases like dengue, chikungunya, swine flu are 3/4th lesser. We initiated the scheme for free diagnostic test for all the residents of Delhi and banning the chewable tobacco products are some of the steps not liked by many individuals or groups. It is a major lobby here.

As far as the issue regarding my daughter is concerned, it is very unfortunate. She is an architect and got admission in IIM Indore. It was I who asked her to work for a year as a volunteer in mohalla clinics, as she had good administrative skills. She joined as a volunteer in Delhi Health Mission to help mohalla clinics. Even when she went for a week’s training with 70 other people in Ahmedabad, the expenses were from my pocket. Here, I think, the voluntary services are not regarded as it should be, people have very negative approach. I don’t know why people or media don’t question about ministers appointing close relatives as their OSDs. Her name was tarnished in the national media, but I think it is not her loss but the project has lost a good volunteer.

Union health minister JP Nadda informs that health is a state subject and there is no dearth of funds from the centre to the state. He added that the state governments should do rightful utilisation of this budget. Your comments.

Ask the union health minister to list out funds they have given to each state. If such a list is put out, Delhi will be the last in the list. First of all, I would like to ask the centre to gives us a free hand to run our health schemes. Overall, on health front, I would say AAP government is working on all the promises it made in its manifesto, certain promises have been fulfilled and we assure that the rest will be achieved within the next two years.