Maiden multi-stakeholder summit on One Health held in Delhi 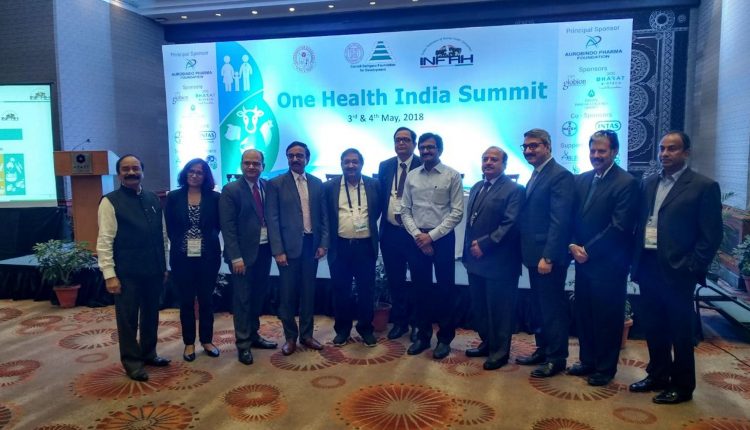 Discussions were held on challenges and solutions regarding inter-connectivity of human health, animal health and environment

One Health Summit was recently held in New Delhi. The two-day summit was organised by the Cornell Sathguru Foundation for Development. It was inaugurated by Dr Eshwara Reddy, Drug Controller-General (India) (DCGI) and Dr SR Rao, Department of BioTechnology (DBT) in New Delhi. The summit discussed the future of One Health and how little changes can affect and impact all concerned.

Giving the keynote address, Dr Eshwara Reddy, DCG(I), said, “As a drug regulator, I like to emphasise that we are focussing on various issues pertaining to anti microbial resistance, particularly on how to curb the availability of unapproved drugs, especially the fixed dose combination remains one of the main concern. We are trying to come out with specific regulatory pathways for the brand of marketing authorisation for vaccines and other products. CDSCO has conducted six major raids in different parts of India recently and found that some of the companies are manufacturing a new drug, which was not even approved by us. These kind of products are affecting public health. As a drug regulator, we are trying to curb such activities.”

Highlighting the various activities done by Central Drugs Standard Control Organization (CDSCO), Reddy announced that a veterinary medical cell will be constituted soon in CDSCO. He said, “It will be a separate vertical, which will be headed by a separate team of a drug inspector and an assistant drug controller. This is need of the hour because Indian regulators do not focus or concentrate on veterinary medicines. Our major focus is on human vaccines. I hope the health of people is connected to the health of animals and the environment.”

Speaking on the occasion, Pushpa Vijayaragahavan, Director, Sathguru Management Consultants, said, “Interconnections of human health, animal health, food and environment can no longer be ignored and the idea of the “One Health Concept” is in essence, to appreciate the wealth of opportunity that lies in the interface area of this triad, which could be capitalised on, to protect the health of our planet as a whole.”

The two-day summit was the first multi-stakeholder One Health summit in India, which was conceputalised on three major key themes – AMR, zoonotic disease vaccine and surveillance and food safety.

If we can harness the demographic dividend in India, we can be at the forefront of…