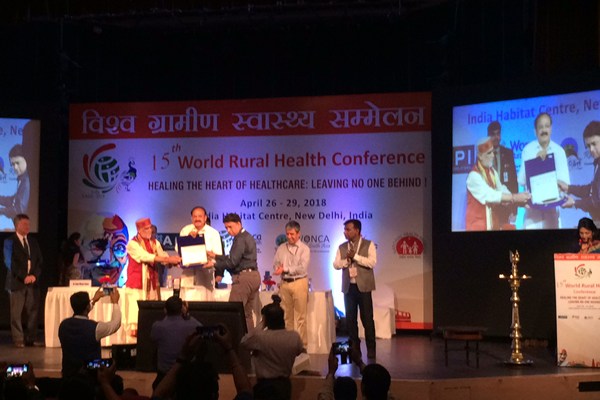 NHM Rajasthan entered into a technology partnership with Kolkata based Glocal Healthcare Systems to cater to primary healthcare needs.

The award was handed over to Naveen Jain, MD NHM, Govt. of Rajasthan by Venkaiah Naidu, Vice President, Gov. of India and Ashwini Kumar Choubey, Minister of State for Health & Family Welfare, Govt. of India.

Glocal Healthcare, is operating ten super speciality hospitals in tier II & II cities of Bengal, UP, Bihar and Odisha; has developed its own software Litmus DX which is being used for dispensing online healthcare in the brand name of Glocal Digital Dispensary to a sizeable population in the country. Glocal has been operating such digital dispensaries in other states like Odisha, Chattisgarh, Jharkhand, Bihar & West Bengal.

NHM Rajasthan has implemented effective primary healthcare delivery system in 100 nodes, using Glocal Healthcare telemedicine solutions. So far about 33000 patients have benefitted from these centres, in the last eight months and over the next 36 months, this pace is slated to go on to cover more than half a million patients per year, providing access to general physicians, specialists and super specialists for their primary healthcare need.