The indirect cost of COVID-19 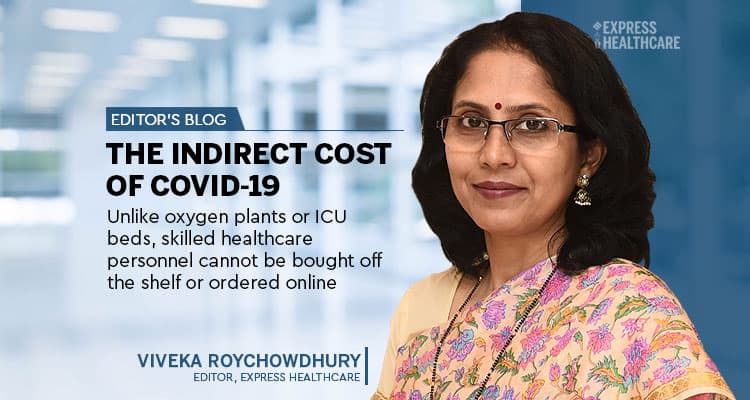 Even as we start 2022 with the welcome approval of precautionary/booster shots for frontline and healthcare workers and senior citizens with co-morbidities, and shots for adolescents as well, one has to wonder if we are any closer to the end of the COVID-19 pandemic.

The Omicron variant of SARS-CoV-2 will probably not be the last salvo. How many booster shots will we need to feel safe? Safe enough to address the indirect cost of the COVID-19 pandemic on other health indicators?

For instance, the fifth round of National Family Health Survey (NFHS-5) results showed that while institutional births significantly increased to 89 per cent from 79 per cent in NFHS-4, breastfeeding within one hour of birth has not seen proportionate improvement. More so, caesarean sections have substantially increased from 17.2 per cent in NFHS-4 to 21.5 per cent at population level.

To Dr Ashutosh Sarwa, National Program Manager, Newborn Care and Infant Young Child Nutrition, Nutrition International, India, this data means that increased institutional delivery has seen no proportionate increase in skilled human resources. Due to this, quality of care for safe deliveries is affected, borne out by the poor status around breastfeeding within one hour, which continues to be stagnant since the NFHS-4 report.

Pointing out that absence of early initiation of breastfeeding also means that newborns through caesarean sections, pre-term babies, and low birth weight infants are at a higher risk of malnutrition and mortality, he recommends the strengthening of health infrastructure with the deployment of adequate skilled human resources. Further, improvement in pregnant women receiving at least four ante-natal care check-ups, which is at 58 per cent currently, can reduce complications and the need for caesarean delivery and promote improved birth outcomes.

If the first and second waves’ biggest learnings were to plug the gaps in healthcare infrastructure, the third wave will expose the sparseness of skilled human resources. Even if healthcare infrastructure has been ramped up, unlike oxygen plants or ICU beds, skilled healthcare personnel cannot be bought off the shelf or ordered online. Yet, we have resident doctors resorting to strikes, to get the government to expedite the NEET-PG counselling process, which has already been considerably delayed due to COVID-19. Worse, there are reports that some doctors on strike were ‘man-handled’ by police officers.

On a positive note, there have been efforts to expand and upskill healthcare workers at all levels. The pandemic saw the blooming of online medical education, though there are now concerns on the quality, depth and credibility as not all courses are backed by reputed organisations. This situation underlines the importance of setting standards in medical education for all levels, not just for  doctors.

But we also have to guard against too much regulation. At our recently held virtual Radiology & Imaging Conclave, experts rued the fact that India had become the “laughingstock” globally as some states had added a clause including CT scans in the Pre-conception & Pre-natal Diagnostics Techniques (PC & PNDT) Act, 1994. The regulation was enacted to tackle the decline in sex ratio in India, which deteriorated from 972 in 1901 to 927 in 1991.

While no one faults the intention of the Act (to prevent the use of imaging techniques, most often ultrasound, as a sex determination tool leading to female foeticide) including CT machines under this Act is “ridiculous”. Experts pointed out the fallacy of using the blind logic that both ultrasound and CT scans are imaging techniques! But a CT scan would “fry the foetus” causing permanent genetic damage and which gynaecologist or parent would want that, asked an irate radiologist?

Senior radiologists’ reason that the clause including CTs under this Act needs to be omitted as soon as possible. They point out that chest CTs play a major role in determining disease severity and correct line of treatment in COVID-19.

Unfortunately, new installations are being delayed due to red tape associated with the process. An unfortunate fallout of this stand-off is that access to legitimate medical procedures with proven benefits might remain poor, which could prove crucial in tackling the impending Omicron-driven third SARS-CoV-2 wave.

As Express Healthcare’s 21st anniversary edition presents predictions of trends to watch out for in the year ahead, we hope 2022 will be a year when we succeed in living beyond COVID-19, even as we learn from a virus that mutates to survive. Just as business models change, our laws must mutate in tandem. Else we will all meet the same fate as the dodo.