Taking Ayushman Bharat to the next level

By Viveka Roychowdhury Last updated May 17, 2019 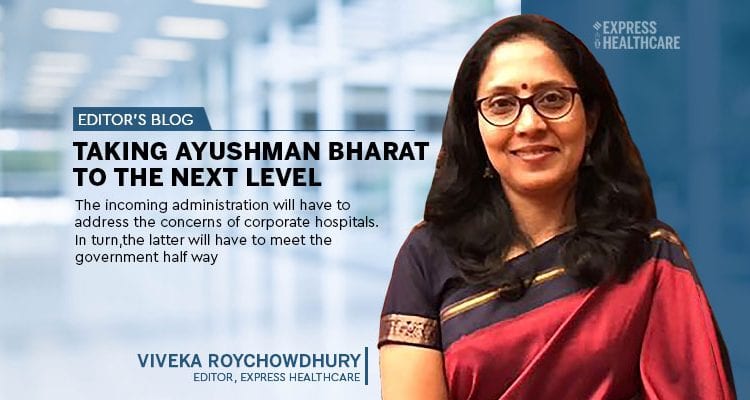 In the hospital segment, PE players are driving consolidation. TPG, Temasek and Blackstone, the PE players backing Manipal Hospitals, finally won the race for Medanta, managing to outbid the KKR- Radiant Life Care combine. This consolidation will continue as India’s major hospital chains see stressed performance, first with the Goods And Services Tax and then as regulators trim the margins on pharma components of the healthcare delivery ecosystem. These measures range from price caps on stents, knee implants and more recently a large number of oncology drugs most of which are sold directly through hospitals.

But hospitals have more or less negated the government’s attempt to make healthcare more affordable for the end-users i.e. the patients. Most hospitals have compensated for these cuts by re-pricing the service and product components of their packages, hence an ICRA report analyses that the performance of listed hospitals have probably bottomed out, with some improvement in Q3 FY2019 after subdued performance in the last financial year as well as in the first half of this financial year. While one needs to wait and see if this uptick will continue, the underlying fundamentals of the sector continue to be favourable. Thus, in spite of stressed margins, these hospitals have used debt to fund expansion plans, counting on these fundamentals to play out as their capex cycle ends.

In fact, a squeeze on profitability is making hospitals take a hard look at all costs, with the bottom line being better efficiencies. We are set to see interesting partnerships. Like the one between B2B medical supplies provider Medikabazaar and the Association of Healthcare Providers India (AHPI). Reportedly worth Rs 1000 crore, this partnership for central medical supplies procurement attempts to address a major pain point of smaller hospitals: the lack of clout and scale to bargain for better prices. Beyond providing medical equipment, further value add comes from the provider’s proprietary age artificial intelligence (AI) and machine learning (ML) tool which will give hospitals real time stock projections, to aid inventory optimisation, leading to better efficiencies.

Technologies like hospital management information systems and telemedicine are already leading to better efficiencies and patient convenience and care. An EY report, Transforming healthcare in India, points out how a top Indian hospital’s telemedicine center achieved 85 per cent reduction in the number of patients that had to be transported to the hospital.
Will consolidation and technology-driven efficiencies lead more hospitals to sign up for Ayushman Bharat – Pradhan Mantri Jan Arogya Yojna (AB-PMJAY)? Seven months after its launch in last September, as of April 3, 2019, approximately 2.89 crore e-cards have been issued out of a target population of 50 crore. According to the AB-PMJAY site 15,291 hospitals have been empanelled so far; 554 of them under the private not-for-profit category and 6935 categorised as private for profits. Larger corporate hospitals and chains remain wary, citing reports of implementation glitches and low package rates.

As the seven phase general elections continue across the Indian sub-continent, the fate of numerous initiatives like AB-PMJAY hangs in the balance. However, it will be difficult for any political party to justify rolling back a scheme which attempts to tackle one of India’s biggest challenges: increasing access of healthcare to the under privileged sections of society. The incoming administration will have to address the concerns of corporate hospitals. In turn, the latter will have to meet the government half way and consider strategies to tap opportunities at the bottom of the pyramid, trading better occupancy rates for lower profit margins.

But the larger question remains, will increased access lead to better health outcomes? Or will there be more surgeries simply because they are being covered under the scheme? This is what the new government will have to track very closely, in order to ensure that as a payor, it can negotiate not just a bigger but a better bang for the buck and take this initiative to the next level.