Safe Blood for All: How Close Are We? 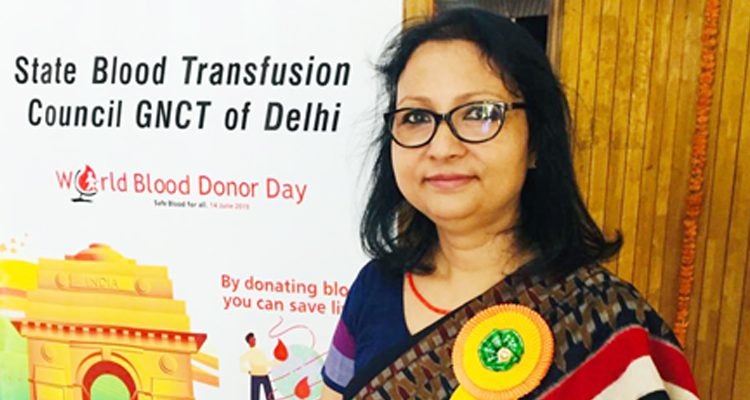 Millions of patients rely on blood transfusion every year, to survive. Blood transfusion services (BTS) all over the world encounter a twofold challenge on a daily basis- to ensure sufficient blood and safe blood supply for such patients. According to the World Health Organisation (WHO), even 1 per cent of a country’s population can fulfil the country’s blood demand. Sadly, low to middle-income developing countries constantly struggle to maintain an adequate blood supply. In addition to that, access to safe blood is another issue which cannot be taken for granted. Shortage of blood supply and transfusion transmitted infections (TTIs) are two major challenges that exist in India. The problem lies in the low number of voluntary blood donors or rather, repeat voluntary donors.

Two major triggers for blood safety which greatly highlighted the importance of voluntary blood donation were the identification of the first individual who contracted HIV through blood transfusion and the HIV epidemic that took place in the early 1990s. Safe blood supply gained utmost importance for blood transfusion services and authorities started promoting voluntary blood donation.

A voluntary blood donor donates blood willingly and receives no benefits in any form. Such donors are considered the safest because they are driven by the emotion of care for others. They do not tend to conceal any health related information as they understand their blood is going to save many lives. On the other hand, when a donor donates blood only when it is required by a friend or a family member in an emergency situation, it is a replacement donor. Replacement donors tend to conceal their true health information and such donations pose a threat to the safety of the blood supply. It has been observed by numerous studies that the prevalence rate of infectious diseases in replacement or a family donor is higher than voluntary donors.

The WHO Global Database on Blood Safety data shows that only 54 out of 193 countries have achieved 100 per cent voluntary blood donation. Out of these, 68 per cent were developed countries. According to NACO Blood Bank Assessment Report 2016, India reports an average of 80 per cent voluntary blood donations in a few regions and less than 60 per cent in some regions. The fact that the annual requirement is 12 million and we are short of 2 million blood units reflects the true status of blood donation in our country.

Further, it has been observed that countries with 100 per cent voluntary blood donation numbers have much lower risk of TTIs. News about TTIs, surfacing almost every month in India, gives a shocking picture of our blood supply. Also, hepatitis B and C are less talked about because of low awareness about the issue, although the prevalence is rising every year.

There exists a gap between the expected amount of voluntary donations and the actual number. The problem primarily lies in the fact that in our country, we still have a long way to go in terms of motivating people to come and donate blood regularly. I think the donor motivation messaging should be based on a two-pronged strategy, targeting both first time donors as well as repeat donors.

There is an urgent need to create awareness amongst the youth of today to start donating blood. A voluntary blood donor donates blood willingly and receives no benefits in any form. However, what they get from this noble deed is a sense of altruism, apart from the goodwill of patients and their families who are in need of blood. Many societies and bodies, both at the national level as well as the state level invest in campaigns and communication initiatives from time to time, in order to motivate people to donate blood.

Most awareness campaigns revolve around motivating first-time donors to go and donate blood. However, there are many donors who fail to donate blood repeated number of times. This could be because of a variety of reasons, ranging from myths about blood donation like “one might become weak on donating blood repeatedly”, lack of time, procrastination, lack of awareness about the number of times in a year one can donate blood/ components, etc. I feel that a lot of work can be done in this segment to increase the overall voluntary donations in India.

Due to the fragmented blood banking system in India, a nationwide donor database is not available. For instance, when a person is deferred or rejected, and the same person goes to another blood bank to donate blood after a few months, the second blood bank has no historical data of the donor and has to go through the entire donor selection and screening process once again.

Moreover, having a robust database of healthy donors at a national level can go a long way in reaching out to them and motivating them to donate repeatedly. Hence, integrating blood banks across the country to share donor data is an approach that can help in ensuring timely supply of blood which is free from infections.

Even in the absence of 100 per cent voluntary blood donation, a large chunk of the existing problems related to unsafe blood supply can be minimised by the adoption of more sensitive screening techniques. Individual donor NAT testing (ID-NAT) is one such technique that can help in curbing transfusion transmitted infections in a significant manner. The other being mini pool NAT testing technique. NAT screening shortens the window period of current serology based techniques and is efficient enough to detect early stage infections in asymptomatic donors, thereby providing an additional layer of safety. It is great to see that more and more blood banks are coming forward to adopt NAT in an effort to make blood supply safer in India.

We can say that the current scenario is challenging yet hopeful. Voluntary blood donation promises sufficient blood supply as well as safety. This World Blood Donor Day, let us pledge to donate blood voluntarily and regularly and make a difference in someone’s life.