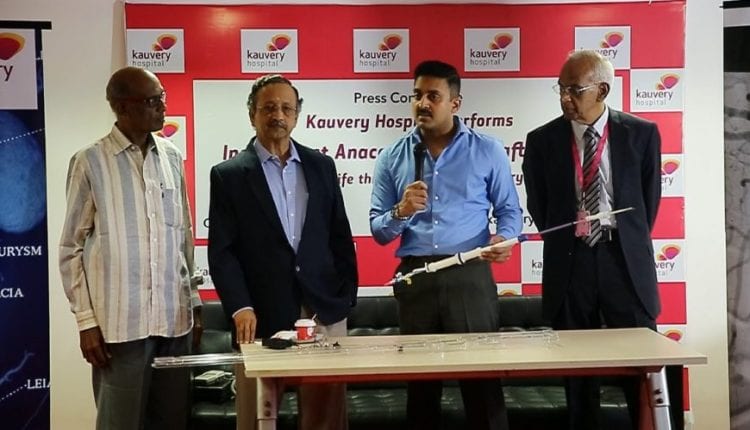 The complex, dilated aortic aneurysm was treated successfully which allowed the patient to be mobilised the day after the procedure and be discharged on the third day

Prabhakara Rao Kongalla, a 69-year-old resident from Andhra Pradesh suffered from severe abdominal pain and he was diagnosed to have a large aortic aneurysm in the abdomen due to abnormal dilatation of the aortic blood vessel. Before coming to Kauvery Hospital, he had visited various hospitals wherein he was suggested to have an open surgery which involved increased risk and several days of stay in the ICU, eventually resulting in prolonged convalescence.

Kongalla was assessed by Kauvery Hospital’s dedicated 24-hour aortic team. The doctors had suggested for a treatment through a minimally invasive keyhole procedure known as endovascular therapy, which will eliminate the need for a open surgery and reduce the recovery period and allow the patient to walk home in two days.

By performing the keyhole procedure using Anaconda stent system, the very complex and dilated aortic aneurysm was treated successfully which allowed Kongalla to be mobilised the day after the procedure and be discharged on the third day.

Dr Aravindan Selvaraj, Executive Director, Kauvery Hospitals said, “A well-structured plan of action with the right resources in place is solely responsible for the success in repairing infra-renal abdominal aortic aneurysms for the first time in the country with Anaconda stent graft system. We aim to help people around the world to lead a normal and active life by addressing all healthcare needs.”

Speaking on the occasion, Dr AB Gopalamurugan, Senior Consultant Interventional Cardiology, and Chief, Endovascular Therapy, Kauvery Hospital said, “For the very first time in the country, we have successfully performed the Anaconda stent graft procedure on Kongalla who had been suffering from aortic aneurysm. We are glad to see the progress in his health from the day he was brought to the hospital to today where he stands amidst us, all hale and hearty. It was not very long ago when Kongalla had come to us complaining of severe pain in the abdomen. On diagnosis, the unusual swelling was confirmed to be the infra-renal aortic aneurysm. Kauvery Hospital has been on the forefront in providing the best treatment options for various cardio-vascular ailments and conditions.”