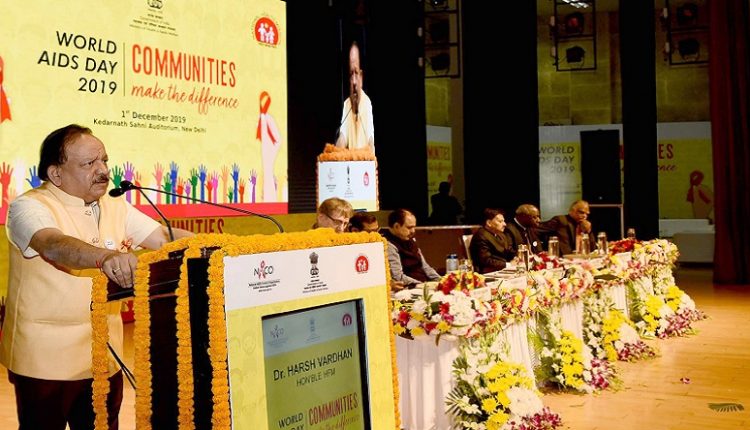 Union Health Minister Dr Harsh Vardhan emphasised upon the newer steps which are being taken by Government of India to achieve Sustainable Development Goal of ending the epidemic of AIDS as a public health threat by 2030. He was speaking on the ocassion of World AIDS Day organised by National AIDS Control Organization (NACO) in New Delhi.

Vardhan added, “Let us shun any kind of discrimination in our thoughts, actions and behaviour in our interaction with those who have HIV and AIDS. Let us do away with nomenclatures such as “AIDS/HIV communities. Let us not bracket people who suffer from and have survived various diseases.”

Dr Vardhan commended the immense contribution of the partner communities who have played a yeoman role in spreading information about the disease, to dispel misinformation, fear and apprehensions, and helped people to access testing and treating services of NACO.

The global theme of this year’s World AIDS Day is ‘Communities Make A Difference’. At the event, he awarded the various Red Ribbon Clubs which have mobilised the youth and communities across the country. More than 1200 Red Ribbon Clubs have contributed to this collective effort, he stated.

Stressing on the need for multi-faceted and multi-sectoral response, Dr Vardhan stated that NACO has not only signed Memorandum of Understanding (MoU) with 18 key Ministries/Departments to augment a comprehensive AIDS response but also with more than 650 industries of public and private sectors to mobilise their support. He also commended the contribution of the pharma industry of the country which has supported other countries in their fight against AIDS through affordable drugs.