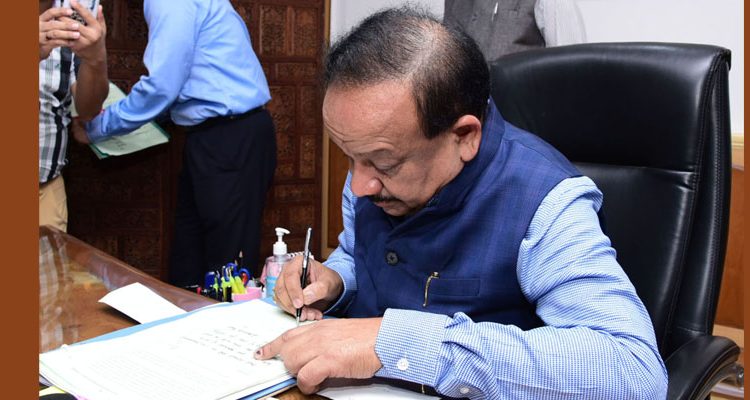 Upon assuming charge of the Health and Family Welfare Ministry, Union Health and Family Welfare Minister, Dr Harsh Vardhan, has written to the Chief Ministers of Delhi, Odisha, Telangana, and West Bengal urging them to join the Government of India’s flagship health protection scheme, Ayushman Bharat Pradhan Mantri Jan Arogya Yojana (AB-PMJAY). He has also spoken with Arvind Kejriwal, Naveen Patnaik and Mamata Banerjee, the respective Chief Ministers of Delhi, Odisha and West Bengal and is trying to speak with K Chandrashekar Rao, Chief Minister, Telangana, according to a press release.

Taking stock of the situation that three states and one Union Territory (UT) are yet to join the Government of India in implementing AB-PMJAY, Dr Vardhan said, “It is important that the benefits of the visionary scheme like Ayushman Bharat should reach all deprived and vulnerable people in the country. I will make all efforts to convince the remaining states and UT to bring the benefits of the scheme to their people and ensure that no eligible person is deprived of these benefits.”

In his letter, the minister said that it is due to clear and transparent processes, ease of access and benefits to a large section of the poor population that 32 states and UTs have accepted the scheme. The scheme has been running successfully providing financial protection to crores of people. Urging them to join the scheme, the minister argued that the states would gain resources, national portability, state-of-the-art technological platforms, implementation systems, and world-class analytics systems at no additional cost. They will also benefit from a well-proven fraud monitoring and control system and exchange of key learnings and best practices of other states towards equitable healthcare. The minister made it clear that financial resources will be made available to the states with adequate flexibility in the spirit of cooperative federalism.

The minister pointed out that implementing AB-PMJAY would prove highly beneficial for not just the state but equally importantly to its people and all stakeholders. The ultimate beneficiary of this collaboration will be poor and vulnerable people. Due to the portability of services, the states will gain from the nationwide network of hospitals and will also help provide services in their own state to those from outside their states. The minister assured full support and cooperation to states in aligning their own schemes with Ayushman Bharat.

All PHCs to have doctor from alternative medicine systems: AYUSH minister

‘We are currently focussing on oncology care’