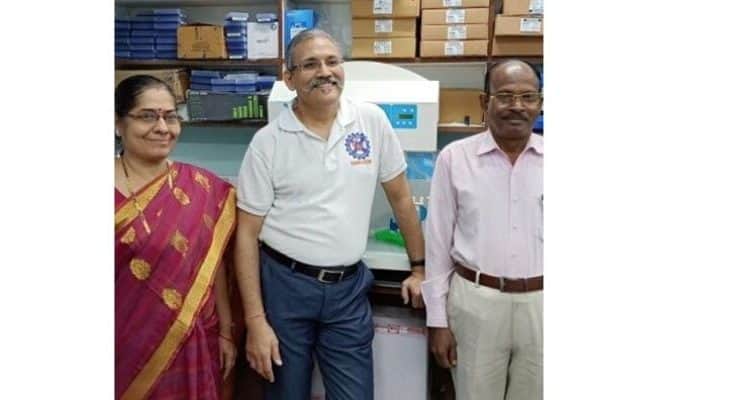 Although based on European data, the researchers found that the test is effective in diagnosing the right type of diabetes in Indians, even in its current form

Researchers at the KEM Hospital and Research Centre, Pune; CSIR-Centre for Cellular and Molecular Biology (CCMB), Hyderabad; and the University of Exeter in the UK have found that a genetic risk score is effective in diagnosing type-1 diabetes in Indians. The outcome of their research has been published in Scientific Reports.

Will the European genetic risk score be effective in diagnosing type-1 diabetes in Indians? This was the question that naturally arises as the bulk of the research in this field has been conducted in European populations. To answer this question, the research team studied people with diabetes from Pune, India, using the genetic risk score. The team analysed 262 people with type-1 diabetes, 352 people with type-2 diabetes, and 334 people without diabetes. All were of Indian (Indo-European) ancestry. The research outcomes compared well with those in Europeans as revealed in the Wellcome Trust Case Control Consortium Study.

It is widely believed that only children and adolescents get type-1 diabetes and obese and older (typically after 45 years of age) get type-2 diabetes. However, recent findings have shown that type-1 diabetes can occur later in life, while type-2 diabetes is on the rise among younger and thinner Indians. Distinguishing the two types of diabetes, has, therefore, become more complex. The two types follow different treatment regime with type-1 diabetes needing lifelong insulin injections but type-2 diabetes often being managed with diet or tablet treatment. Misclassification of the type of diabetes may lead to sub-standard diabetes care and possible complications. In this context, this particular study gains importance as it helps in diagnosing diabetes from its type-1 and type 2 variants correctly.

Although based on European data, the researchers found that the test is effective in diagnosing the right type of diabetes in Indians, even in its current form. They have also found genetic differences between the populations, indicating that the test could be further improved to enhance outcomes for Indian populations.

“Diagnosing the right diabetes type is an increasingly difficult challenge for clinicians, as we now know that type 1 diabetes can occur at any age. This task is even harder in India, as more cases of type 2 diabetes occur in people with low BMI. We now know that our genetic risk score is an effective tool for Indians, and can help get people on the treatment they need to avoid life-threatening complications such as diabetic ketoacidosis and to achieve the best health outcomes”, said Dr Richard Oram, University of Exeter Medical School.

Dr Chittaranjan Yajnik of the KEM Hospital and Research Centre, Pune agrees with Dr Oram. He said that the escalating epidemic of diabetes in young Indians makes it imperative that we diagnose the type of diabetes correctly to avoid mistreatment and its long-term biological, social, and economic implications. The new genetic tool will be a great help in this. It will help decide the contribution of failing pancreatic B-cells against reduced action of insulin due to excess fat and smaller muscle mass in the body of Indians (‘thin-fat Indians’). He further said, “We look forward to using this test in diabetic patients from different parts of India where the physical characteristics of diabetic patients differ from the standard description.”

The authors also found that the study can be used to predict the onset of type 1 diabetes in Indians.

Referring to the finding that nine genetic areas (called the single nucleotide polymorphisms [SNPs]) that correlated with type-1 diabetes in both Indian and European populations, Dr GR Chandak, Chief Scientist leading the study at CCMB, remarked: “It’s interesting to note that different SNPs are more abundant among Indian and European patients. This opens up the possibility that environmental factors might be interacting with these SNPs to cause the disease.”

Given the genetic diversity of the population of India, the study’s results need to be validated in other ethnic groups of the country too. Dr Rakesh K Mishra, Director, CSIR-Centre for Cellular and Molecular Biology (CCMB), said: “As more than 20 per cent of people with type-1 diabetes below the age of 15 years of age are in India, developing a genetic test kit to reliably detect type-1 from type-2 diabetes holds a lot of significance for the country.”

WHO lauds India’s fight against COVID-19