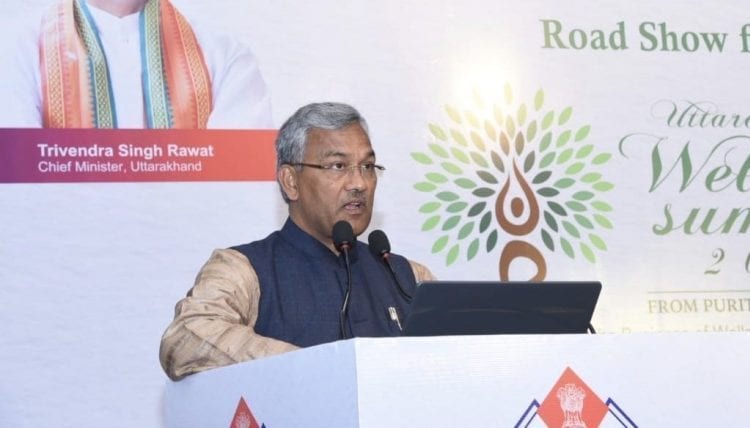 The Government of Uttarakhand recently officially kick-started a series of roadshows to promote its upcoming Wellness Summit in association with CII as the National Partner. The Wellness Summit 2020 roadshow series was inaugurated by Trivendra Singh Rawat, Chief Minister, Uttarakhand in a glittering function held in Mumbai.

The Uttarakhand Wellness Summit 2020 planned to be held at Dehradun in April, in fact, draws its inspiration from none other than Prime Minister, Narendra Modi himself. Modi during the inauguration of the Global Investors Summit, interestingly, had suggested that Uttarakhand could efficiently build on its inherent strengths and elevate itself into the status of a Global Spiritual Economic Zone.

In his inaugural address, Rawat said the rise of Uttarakhand as the world’s ultimate Spiritual Economic Zone was imminent and irreversible.

Even as the roadshow for the Wellness Summit 2020 was underway the Government of Uttarakhand is inundated with positive feedback and promises of sustainable investment. This became evident when major players like Zivaya Wellness, JSW Sports, Herbal Life Nutrition and Resinno Biotech expressed their willingness to be the part of state government initiative.

Vishal Kamath, CEO Kamath Group of Hotels and Co-convenor CII Maharashtra Panel on Energy and Sustainability in his welcome address said Uttarakhand has what it takes to emerge as the world’s ultimate Spiritual Economic Zone.

“Mother Nature is at her best in Uttarakhand. The State has very strong up-ticks, be it Yoga, Ayurveda or Meditation,” said Rawat.

“The state has undertaken various business reforms as prescribed by the World Bank and Department for Promotion of Industry and Internal Trade under ease of doing business initiative. The state has improved its ranking regularly over the years and it currently stands at 11th position (the evaluation Year 2017) out of 35 states and union territories of India,” Rawat further added.

The Global Wellness Economy which stood at a whopping $4.2 trillion in 2017 is growing at an impressive 6.4 per cent annually. So, they are not surprised, Uttarakhand wants to capitalise on this as the State has the potential to position itself as the epicentre of Global Wellness. Further, the State Government is optimistic about attracting added investments into the Wellness Sector including physical infrastructure.

The ‘invitation-only’ summit that provides a holistic platform for interaction and deliberation for players and thought leaders, as a precursor to the main event will also organise an Ambassadors’ Round Table Meet at Rishikesh and a curtain-raiser at Almora in addition to the national and international roadshow series.

The State Government which is determined to make the Summit a resounding success has also accorded industry status to the Wellness and Ayush sector. This move will enable potential investors and other stakeholders across sectors to avail various government incentives, say experts.

The State has also established a single window clearance system to enable Ease of Doing Business through its Investor Promotion and Facilitation Centre (IPFC). This is in addition to a centralised one-stop-shop that will facilitate interaction between government agencies and various stakeholders.

At the road show, two presentations were made before the industry leaders and entrepreneurs.

Manisha Panwar, Principal Secretary, Industries in a detailed session covered the scope and scale of Wellness Sector in Uttarakhand and apprised about the abundant investment opportunities in sub-sectors including nutraceuticals, organic food, natural fibre, beauty products and wellness real estate.

As part of the promotion exercise, the state government delegation will soon travel to New Delhi and Kochi to stimulate the interest of investors.

DKMS-BMST Foundation India completes one year of operation in India