After due reflection, MTaI has come to the view that Aatma Nirbharta in medical technology sector would be achieved when we can make competitive products in India: Pavan Choudary, Chairman and Director General, MTaI

Prime Minister Narendra Modi, on May 12, 2020, made a clarion call for an ‘Aatma Nirbhar Bharat’ – a self-reliant India to rejuvenate our industries.

While elucidating that the definition of self-reliance has undergone a change in the globalised world, the Prime Minister emphasised that India’s culture considers the world as one family and progress and contribution in India is a part of contribution and progress in the whole world. He also revealed the financial stimuli the government had planned to revive the businesses.

Echoing the sentiments of the PM, Piyush Goyal, Commerce & Industry Minister, GoI highlighted that India must build its confidence and competency in producing quality products in a cost-competitive manner that can compete globally.

Nirmala Sitharaman, Finance Minister, GoI also stated that ‘self-reliant India’ did not imply ‘isolationism or becoming exclusionist’, and underlined the approach to attaining self-reliance by building capacities, skilling people and competing globally by acquiring these strengths.

In this statement, Pavan Choudary, Chairman and Director General, MTaI shares what ‘self-reliance’ means for the MedTech industry. He says, “We are fully aligned with the PM’s vision for a self-reliant India. After due reflection, MTaI has come to the view that Aatma Nirbharta in medical technology sector would be achieved when we can make competitive products in India, when people of India can be treated in India without having to travel abroad and without having to spend precious foreign exchange, when R&D flourishes to create innovative solutions and when every Indian healthcare worker gets trained as well as his best global counterpart.”

India would be Aatma Nirbhar in the MedTech sector when we can:-

“Furthermore, bringing FDI in India will also take us forward in the path of self-reliance. MTaI re-dedicates itself to this task and strengthens its resolve to be the foremost contributor of investments in this sector once again,” added Choudary. 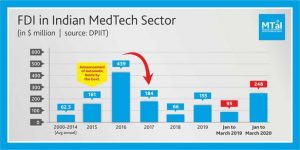 The FDI which was brought to automatic route in the first quarter of 2015, took the annual FDI inflow in medical devices that year from an annual average of $62 million to $161 million and to $439 million in 2016. The FDI then plummeted to pre-automatic-route-levels (seemingly due to the unintended consequences of some well-intentioned policy changes, which disenchanted the investors). The recent efforts of the government seem to be bringing back the FDI back on track and the first signs are visible in the first quarter of 2020.