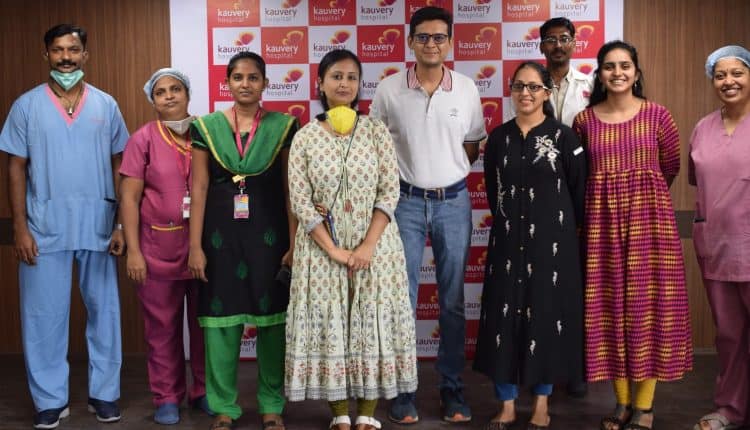 The 14 year old girl, was brought to hospital with complaints of one episode of seizure at home followed by another in hospital

Kauvery Hospital successfully treated a complex and rare case of autoimmune encephalitis which is an inflammatory condition of the brain, in a 14 year old girl. The patient was discharged from the hospital after 21 days of uncompromised treatment by a team of doctors across specialties during the lockdown.

The 14 year old girl, was brought to the hospital with complaints of one episode of seizure at home followed by another in the hospital. She was evaluated for brain infection as she was having seizures not controlled with common anti-epileptic medications but all the results including spinal fluid testing were negative for any infection.

After several specialised tests and examination by medical experts of various specialties, it was observed that there was no infections or tumour inside the brain that was causing the seizures and the patient was suspected to have autoimmune encephalitis – a condition wherein epileptic seizures are caused by her own immune system causing inflammation in the brain.

In this patient’s case, the auto-antibodies were negative on two occasions and so we concluded that this was autoimmune encephalitis with negative antibodies and super refractory seizures which is a very rare and complex condition.

As she was so unwell, she was put on higher medical sedation to suppress her seizures with ventilatory support. She was treated intensively with immune-suppression drugs including steroids, immunoglobulins and monoclonal antibodies. She was even commenced on special keto diet to help control seizures by the dietician.

After two weeks of treatment, the patient gradually showed signs of improvement. Then she was immediately started on various therapies including physiotherapy and speech therapy to help her get back to normal life.

This patient’s case illustrates that team work was possible even during the most challenging of times at Kauvery Hospital. This patient was treated by a team of doctors and medical personnel consisting of neurologist, intensivists, rheumatologist, nurses, speech therapist, physiotherapists, dietician, etc.

This was truly a complicated medical case that demanded the most dedicated and skilled professionals and at no time there was any compromise on the standard of care offered.

There was also a beautiful humane touch throughout her stay in the hospital, she was pampered by the nurses. Her parents developed a beautiful bond with the medical staff and fellow patients’ families which speaks volume about human nature to help one another in the time of need.

Dr Bhuvaneshwari Rajendran, Lead Consultant and Neurologist, Kauvery Hospital said, “The medical case was very challenging for the team of doctors as the patient required multi-specialty intervention and constant monitoring.  Additionally, the patient was very young and was showing extreme complications with super refractory seizures and cognitive issues. Owing to the lockdown, it was difficult to co-ordinate various testing and scans. However, through the efforts of all the doctors and other medical personnel, we were able to administer the right course of treatment through immunoglobin therapy and medications, which brought a positive turnaround in the patient’s health condition.”

Commenting on the success of the case, Dr Aravindan Selvaraj, Executive Director, Kauvery Hospital said, “We are happy to have been able to provide a multi-disciplinary approach to her treatment to facilitate the best possible care for a positive outcome. It gives us immense pleasure to see the patient and her family go back home with a sense of contentment. I would like to congratulate the team of doctors at Kauvery Hospital, who gave in their best and provided uncompromised care during the pandemic and lockdown to successfully treat a case of high complexity.”

Omicron patients below 60 years can start symptomatic treatment with paracetamol:…

20 per cent of patients in India prefer teleconsultation: Godrej Interio