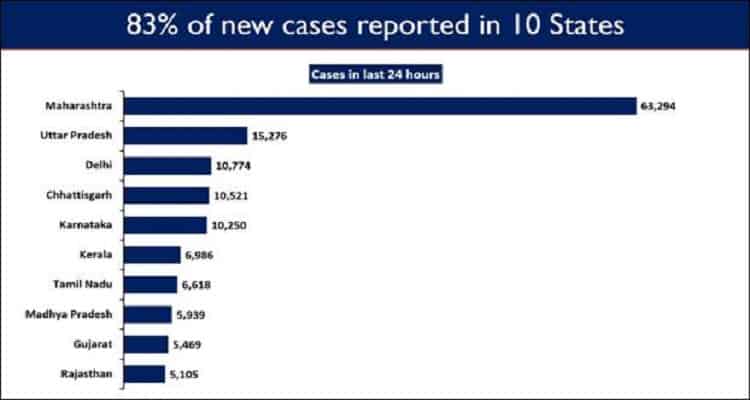 10 states contribute 81 per cent of daily new cases; Maharashtra accounts for 47.22 per cent of total active caseload of the country

Marking the second day of the countrywide Tika Utsav, the cumulative number of COVID-19 vaccine doses administered in the country has crossed 10.45 crore, as per health ministry data.

Eight states account for 60.13 per cent of the total doses given so far in the country. Maharashtra tops at 9.75 per cent, followed by Rajasthan (9.3 per cent) and Gujarat (8.86 per cent).

Ten states including Maharashtra, Uttar Pradesh, Delhi, Chhattisgarh, Karnataka, Kerala, Tamil Nadu, Madhya Pradesh, Gujarat and Rajasthan have shown a rise in the COVID-19 daily new cases. 83.02 per cent of the new cases are reported from these 10 states.

Maharashtra has reported the highest daily new cases at 63,294. It is followed by Uttar Pradesh with 15,276 while Delhi reported 10,774 new cases.

India’s total Active Caseload has reached 12,01,009. It now comprises 8.88 per cent of the country’s total Positive Cases. A net incline of 92,922 cases recorded from the total active caseload in the last 24 hours.

The five states of Maharashtra, Chhattisgarh, Karnataka, Uttar Pradesh and Kerala cumulatively account for 70.16 per cent of India’s total Active Cases. Maharashtra alone accounts for 47.22 per cent of the total active caseload of the country.