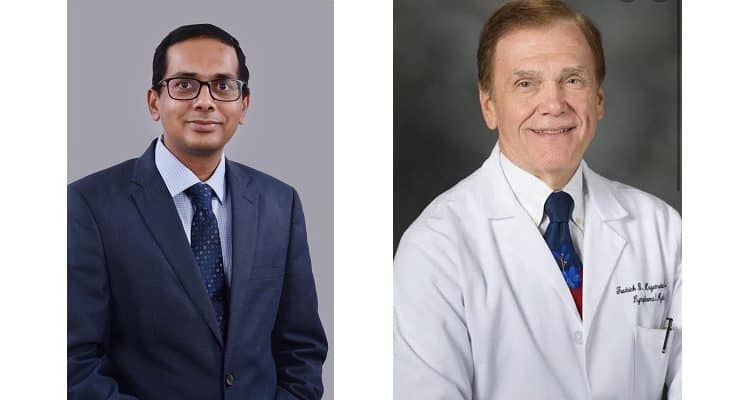 They conclude that with the understanding the biology and clinical behaviour and treatment of lymphomas significantly evolved over the last few decades, chemotherapy-free combinations may eventually offer not only potentially improved survival rates, but reduction of long-term side effects for all patients with cancer

The word “cancer” is often associated with fear of impending morbidity and death. However, over the last 30 years, there has been considerable improvement in therapy of cancer, especially for hematologic malignancies, and, in particular, lymphoma. The causes of this cancer are still largely unknown; however, some cases can be attributed to familial predilection, certain infections (HIV, EBV, and Hepatitis B/C), agricultural exposure to pesticides, and autoimmune disorders. Hodgkin (HL) and non-Hodgkin lymphomas (NHL) can involve nodal and extra nodal sites, and the Ann Arbor and Cotswold staging system have remained standard staging systems for several decades.

Researchers have made significant advances in diagnosis and therapy of lymphomas in the last 20 years. The updated World Health Organization (WHO) 2016 classification of lymphoid neoplasms incorporated certain newer entities based on mutations found on next generation sequencing and various immunohistochemical markers. Fluorodeoxyglucose-Positron Emission Tomography (FDG-PET), a metabolic imaging modality, is now the single best investigational method for HL and most high grade NHLs, as these are highly FDG-avid; this test provides accurate staging for patients with lymphomas, and early response according to this imaging test predicts outcomes.

With modern therapy, more than 80 per cent of patients with HL may now be cured with standard ABVD chemotherapy, as many 60-70 per cent of those with aggressive NHLs who receive R-CHOP. Fortunately, patients with indolent NHLs usually have slowly-growing disease, and their survival has improved with the development of rituximab, an antibody available world-wide. However, even with the advent of novel drugs, these patients face the risk of relapse following initial therapy, and few patients who develop relapse with aggressive lymphoma, except for some with relapsed B-cell NHLs or relapsed HL, are potential long-term survivors.

Lymphoma remains a significant public health problem worldwide and a leading cause of cancer in India with a projected incidence of 52,942 cases in 2020 and a cumulative risk of 1 in 236 individuals (National Cancer Registry Programme, India; Journal of Global Oncology, https://ascopubs.org/doi/pdf/10.1200/GO.20.00122). The first point of contact for most patients with suspected lymphomas are the primary care physicians, who may prescribe steroids or antibiotics, delaying the diagnosis. In countries where there is a high prevalence of tuberculosis (TB), like India, there may also be a bias towards making a diagnosis of TB rather than lymphoma.

September 15 of every year is globally observed as World Lymphoma Awareness Day (WLAD) to create awareness and educate people regarding the symptoms, diagnosis, and outcomes of treatment for patients with lymphomas. This novel initiative was started by the Lymphoma Coalition (LC), a not-for-profit organisation in 2010. Know Your Nodes and Beacons of Hope awareness campaigns were both initiated by the LC to spread basic knowledge on lymphomas; these programmes have increased pubic awareness of research efforts to improve chemotherapy treatments for these diseases.

However, there has been a paradigm shift towards immunotherapy in the treatment of lymphomas over the last decade with the entry of new agents into the clinical arena. Targeted therapy, once only a vague concept, has become a reality because of a better understanding of basic science.

Brentuximab vedotin (BV) is a good example of an immunotoxin, which attaches to (targets) a protein called CD30 on the surface of the susceptible cell, becomes internalised, and carries with it a toxin which damages the cell’s normal function. Hodgkin and other non-Hodgkin lymphomas that carry CD30 on their surface shrink with this agent. This intravenous drug has been used in Hodgkin Lymphoma for relapse, following stem cell transplant, and in combination with standard chemotherapy, improving the chances of survival for many patients. In addition, some aggressive B-cell and many T-cell NHLs, historically regarded as resistant to standard chemotherapy, harbour CD30 on their surface membrane, increasing chances of survival for patients with these diseases. Another novel immunotoxin, Polatuzumab vedotin, is another novel antibody-drug conjugate targeting CD79b, which, in combination with bendamustine and rituximab has improved response rates in relapsed or refractory DLBCL, and is being studied as part of initial therapy for these diseases.

Targets in the B-Cell receptor pathway

The B-cell receptor is another complex molecule on the surface of normal and malignant B cell, and participates in the normal function of those cells. When activated, it causes downstream effects which enable the normal cell to proliferate, migrate, and perform other immune effects. However, some malignant B-cell NHLs rely on specific parts of this pathway to survive, and once these specific targets, are blocked, the cell dies. Bruton’s tyrosine kinase, one such target, can be inhibited by multiple new oral agents, including ibrutinib, the first one approved for therapy of mantle cell, small cell/chronic lymphocytic leukemia (CLL), and other indolent NHLs. Other approved agents in this class include acalabrutinib and zanabrutinib. PI3-Kinase has also been investigated as a target in therapy of B- and T-cells lymphoma, and multiple agents have activity against this protein, including idelalisib, the first approved drug in this class. It is likely that additional new agents will be found to deactivate these targets, especially in combination with other drugs.

In the last five years, the tumour microenvironment has been a key area of research. Pioneering work by Tasuku Honjo and James Allison have led to the approval of immune checkpoint inhibitors which modulate the body’s immune system to kill cancer cells. These drugs work by blocking the target PD-1, found on the surface of normal T-cells. These cells are often exhausted following their interaction with PD-L1, found on the surface of the tumour cell, allowing the tumour cell to escape T-cell surveillance. Following PD-1 inhibition with these intravenous drugs, the T-cells regain normal function, and engulf the tumour cell. Interestingly, these drugs, including nivolumab and pembrolizumab, were approved in therapy of solid tumors, especially melanoma, and have changed survivals of patient with lung and head and neck cancers; however, these agents also have substantial activity in management of Hodgkin lymphoma and some NHLs. These novel agents have now become part of standard therapy for patients with relapsed disease, and are being studied as part of initial therapy for Hodgkin Lymphoma in particular.

Currently, there are two oral agents in this class of drugs: thalidomide and lenalidomide. The latter has been extensively studied alone and in combination for therapy of multiple myeloma, but has also become a useful agent in therapy of many lymphomas, especially follicular lymphomas. In a recent international trial, it provided an important alternative to chemotherapy, especially in combination with rituximab, without the side effects of chemotherapy, even in patients with high risk disease. This oral drug has also been used to treat other malignancies, including small cell, mantle cell and some aggressive lymphomas.

Within the last decade molecular technology has dramatically advanced our understanding of lymphocyte biology. Hundreds of important genes have been identified, not only in tumour cell, but also in normal cells within the tumour milieu, known as the microenvironment. One such set of genes is particularly important in preventing cell death, known as the BCL-2 family, and many lymphomas have increased expression of BCL-2 protein, thereby preventing normal cell death. Investigators have long studied drugs that might inhibit BCL-2, and one in particular, venetoclax, has emerged as being particularly effective in therapy of chronic lymphocytic leukemia and mantle cell lymphoma, and has a potential role in management of other lymphocytic malignancies.

Since normal T cells are pivotal in control of the immune environment, investigators have attempted to energise the immune system by artificially activating autologous (the patient’s own) T cells in the lab, focusing on CD19, a target found on almost all malignant B-cells. After further genetic manipulation, the cells multiply and persist following reinfusion into the patient, and induce high response rates in patients with a wide variety of B-cell lymphomas. These living drugs, known as CAR-T cells have been introduced as therapy for chemotherapy-resistant aggressive lymphomas world-wide, and have permanently changed therapy for lymphomas.  Investigators are now studying other means of T-cell activation because of this novel approach.

Understanding the biology and clinical behaviour and treatment of lymphomas have significantly evolved over the last few decades. Now, a patient with HL or a B-cell NHL can remain relapse-free for years and have a good quality of life. Such chemotherapy-free combinations may eventually offer not only potentially improved survival rates, but reduction of long-term side effects for all patients with cancer.

In the next five years, we see Augnito as the voice interface driving software in hospitals across the country: Rustom Lawyer

How medical robotics is helping medics get better health outcomes