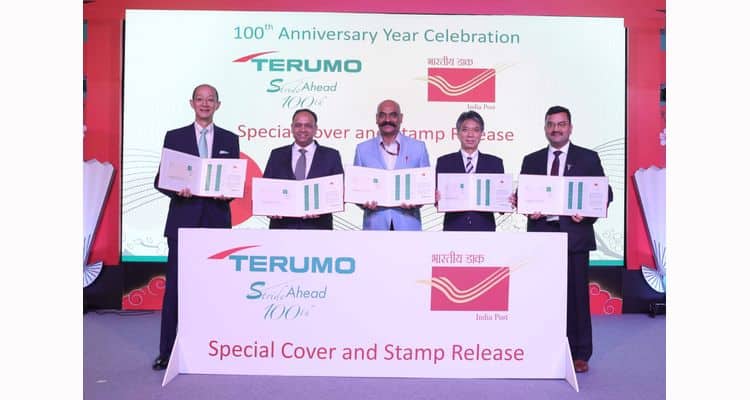 Satoshi Suzuki, Ambassador of Japan to India was the chief guest and participated in the event virtually

Terumo India, the Indian arm of Terumo Corporation celebrated the centenary anniversary of its founding day through an official release of Special Postal Cover and commemorative My Stamp by Department of Posts at an event on Friday, September 17, 2021.

Satoshi Suzuki, Ambassador of Japan to India was the chief guest and participated in the event virtually.

In his congratulatory message to the Terumo Group, Ambassador Satoshi Suzuki said, “It is a great honor and pleasure to be with you to attend the 100th anniversary celebrations of Terumo Corporation. I would like to extend my sincere congratulations to Terumo on its successful business achievements and humanitarian efforts.” He also said, “I hope that Terumo will continue to tackle with challenges in this field. We, the Embassy of Japan, are determined to support their efforts.”

The Special Postal Cover and commemorative My Stamp was released by the Postmaster General (Operations), Delhi Circle, Department of Posts, Ministry of Communications, Government of India, New Delhi, in the presence of Yasuyuki Murahasi, Chief Director General, JETRO India and Kenji Sugino, Secretary General, JCCII and members of the leadership team of Terumo India. The phygital event was live streamed to a global audience comprising associates, partners and customers of Terumo Corporation.

Speaking on the occasion, Ashok Kumar, Postmaster General, said, “Department of Posts is delighted to partner with Terumo India in releasing this Special Postal Cover and commemorative Corporate My Stamp. It is a befitting tribute to a 100-year-old organization that has a rich legacy of contributions to society.”

Guided by its starting point and unchanging corporate mission of ‘Contributing to Society through Healthcare’, Terumo has made great progress over the last 100 years. Founded in 1921, Terumo’s first product was the domestically produced, safe, high-quality thermometer. The company has since supported the healthcare ecosystem worldwide with its innovative products, superior quality and collaborative engagement with medical professionals to deliver to patients the gift of better health.

Speaking on the occasion, Shishir Agarwal, MD, Terumo India said, “I feel honored to be the custodian of Terumo India’s relatively short, yet exciting journey in carrying forward the company’s mission. I would like to take this opportunity to thank all our stakeholders – patients, healthcare professionals, customers, distributors, industry & government bodies, and above all, Terumo associates for being a part of our journey and supporting us in so many ways.”

The centenary theme of ‘Stride Ahead’ signifies the company’s commitment to continue challenging the limits of technology for enabling better patient care in the next 100 years.

Elaborating on the centenary theme, Shishir Agarwal added, “We at Terumo are excited about our future and stay committed to the company’s mission, values and ethos. We will further deepen our presence in India and expand our contribution to the healthcare ecosystem through high quality products and innovations in medical technology.”

The need of the hour is awareness, at both the rural and urban level as diabetes is increasing at an alarming level