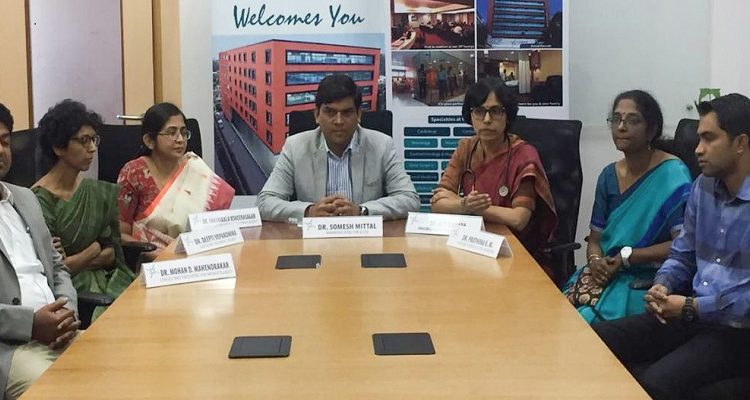 Vikram Hospital Bengaluru has announced that it successfully conducted delivery of a patient suffering from a rare case of Intracranial Rosai Dorfman Disease (RDD), along with other complications. This feat was performed by the ‘Obstetrics & Gynecology’ at Vikram Hospital.

Roopa, a 38 years old lady was diagnosed to have a rare condition called Rosai-Dorfman Disease (RDD) at Vikram Hospital. She initially presented to the hospital’s neurosurgeons with c/o feeling unsteady while walking which worsened with movement of head for two to three months’ duration. She also had headaches and nasal block. The MRI of the head and neck and biopsy from the nasal sinus was done by our ENT surgeon and the condition was diagnosed by our pathologist as intracranial RDD. The patient was seen by Dr Niti Raizada, Sr Consultant, Medical Oncologist and started on chemotherapy.

Married for 12 years now, the patient had undergone two cycles of IVF but was unable to get pregnant. After she was diagnosed with RDD, she had given up hopes of pregnancy. Nevertheless, within three months of the chemotherapy, she discovered that she was pregnant and continued the pregnancy despite the risk of teratogenicity.

Elaborating on the criticality of the case, Dr Shashikala Ksheerasagar, Consultant Obstetrician and Gynaecologist, Vikram Hospital, said, “Our team of doctors categorised this case as high-risk pregnancy and handled such a case for the first time. The case was challenging from the beginning as the patient had a spontaneous pregnancy following chemotherapy for RDD, the obstetric team faced many challenges managing the patient in the presence of co-morbidities like Gestational Diabetes Mellitus (GDM), anemia, sub clinical hypothyroidism, allergic bronchitis, progressive symptom of RDD like diplopia (Visual disturbance double vision), and cerebellar ataxia (difficulty in walking) and headaches.”

Roopa’s health continued to deteriorate where she had difficulty in walking, visual disturbances and managing day-to-day activities like cooking, housekeeping and as pregnancy advanced, she was heavily dependent on her husband for performing even the smallest of tasks such as eating food, medication, etc. If condition was untreated, she would have headaches, severe visual disturbance and incapability to walk. She would have continuously raised intracranial pressures which could lead to herniation of brainstem and sudden death.

It was a challenge handling her, an elective C/S was done, and the patient closely monitored post operatively. Post pregnancy, lactation was an issue as she had a delay in initiation of lactation. Two and a half months after delivery, the patient underwent radical stereotactic radiation for the intracanal lesion. Following radiotherapy, the patient made recovery and was able to handle her baby and household chores independently,” added Dr Ksheerasagar.

Dr Mohan D Mahendrakar, Consultant Pediatrician and Neonatologist, Vikram Hospital Bengaluru, said, “Patient delivered a baby boy and we found that baby was suffering from imperferforate anus, ASD (Atrial Septal Defect – hole in the heart) and PUJ obstruction on the left side. After diagnosis, the baby underwent colostomy on the very first day he was born.”

After a period of time as the baby grew older, an ANO-RECTO PLASTY was conducted by Dr Deepti Vepakomma, Consultant, Paediatric Surgery. The baby is more than a year old now and has normal growth and development.

Dr Somesh Mittal, MD & CEO, Vikram Hospital Bengaluru, also commented, “We are proud to have dedicated and specialised consultants who focus constantly on saving lives of patients at all stages of illness. Roopa’s case was highly risky and our consultants worked really hard to save her and her child.”

Evolution and way forward in management of prostate cancer: Second most common cancer…