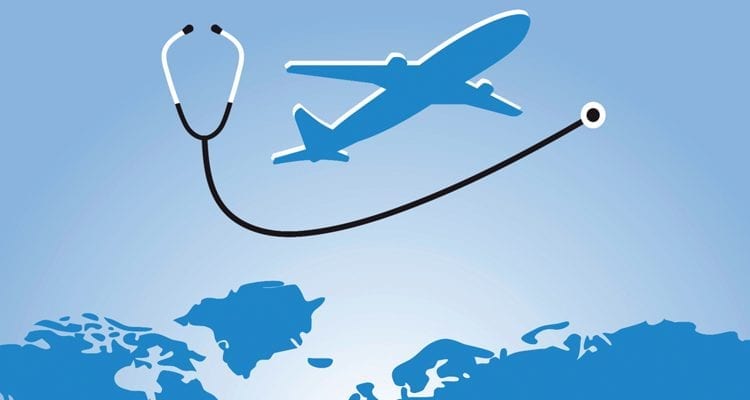 India’s natural beauty ranging from snow-capped mountains of the Himalayas to Rajasthan’s hill forts and the beaches of Goa, its ancient heritage, historical relevance etc has been attracting global travellers to its shores since time immemorial. In the last couple of decades, India has also emerged as a preferred haven for medical value travel (MVT), particularly for high-end treatments and diagnostics and it is looked beyond traditional school of medicines. Experts assert that this MVT segment is a hidden treasure, a growing market with potential, which is still left unexplored. By Prathiba Raju

As per a recent medical tourism market Research Report, the global medical tourism market is growing at a steady pace and it is expected to grow at a CAGR of 21.4 per cent during the forecasted period 2017-2023. It is expected to reach $ 226,762.7 million by 2023. Union Ministry of Commerce and Industry and Services Export Promotion Council (SEPC) estimate that the Indian medical tourism, wherein people travel outside their countries for medical treatment, is currently a $3 billion-worth industry and expected to become a $9 billion industry by 2020. India, with a CAGR of 25 per cent, is one of the fastest growing medical tourism destinations in Asia. As per a FICCI-IMS Knowledge Paper titled, ‘Medical Value travel in India: Enhancing value in MVT’, published in 2016, India is amongst the top six MVT destinations of the world which include Thailand, Singapore, India, Malaysia, Taiwan and Mexico, India ranked third in the world in 2015, but the position keeps fluctuating.

The industry experts contemplate that India needs to organise the largely unorganised eco system of the tourism industry. Create a strong value proposition in the medical tourism sector by improving transparency and trust among global patients, right from quality lodging to proper followups post the patients visit.

MVT market is dynamic — it needs a continuous lookout

Giving a panoramic view about MVT market and specifying how it has grown significantly, Sumit Goel, Partner, Healthcare Advisory, KPMG sighted that MVT market has grown at a fast pace over the last decade due to the focussed effort of industry participants and active support from government and it is likely to sustain the growth over the next couple of years.

Affirming that MVT market is dynamic and players need to continuously evolve and adapt, he said, “Thailand witnessed a surge in the number of middle-eastern patients who got diverted from their traditional destination, the US and Europe after 9/11. However, with strengthening of healthcare facilities locally and changes in insurance policy, the patient volumes have significantly altered yet again. Many Indian and international hospitals are exploring setting up healthcare facilities in Bangladesh and many African countries. It has been witnessed by hospitals in metros in India, inflow of patients reduce once good healthcare facilities come up in neighbouring cities, the volume flow to India may also get filtered once the source countries get good healthcare facilities. Hence, healthcare players would not only need to effectively market their capabilities to attract a larger share of business from existing sources, they would also need to continuously scout for newer opportunities to develop and benefit from. These opportunities can come from new geographies, new patient segments or new clinical services that Indian players develop to compete with other countries.”

Big chain hospitals believe that they will lead the sector, as Indian doctors dominate the global scenario and Indian health institutions have combined excellence with affordability. But they also indicate the cost matters in cross border healthcare.

For most corporate hospitals, MVT is a revenue top-up opportunity due to higher revenue earned per patient as compared to local patients, they carefully look at cost of acquiring and serving an international patient. Apart from the medical procedure itself the other additional costs, which etch away the margins are MVT agency commission, dedicated areas and staffs to deliver better patient experience as compared to local patients, Dr Mradul Kaushik, Director, Operations and Planning, BLK Super Speciality Hospital said, “Indian hospitals are at par and sometimes even better than several international hospitals and the costs are a mere 20 per cent as compared to hospitals in the western world. Developed countries have kept on increasing cost for heart surgery but in India it has gone down in the last three years.”

He further suggested that the government should encourage the sector with promotional policies, procedures and provisions. He added that the services provided by healthcare service provider to foreign national in India who come for treatment should be treated as export of services and make that foreign currency income fully exempted from taxes. Assured that the said move will boost medical tourism in India thereby increasing foreign currency reserve.

Referring to the KPMG analysis, Goel said, “We have come across instances where an analysis of detailed service costing revealed that the MVT segment is less profitable than the domestic segment.”

Reviewing the costs of cardiac surgery in the US and India, Daljit Singh, President, Nathealth said, “A cardiac surgery in US is around $100,000. In comparison, in most hospitals in India, it would be just about $3000-4000. Similarly, in most major disciplines including transplants too, Indian capabilities and outcomes are at par and sometimes even better than several international hospitals and the costs are a mere 20 per cent as compared to hospitals in the western world. A leading private healthcare started three decades ago in India, used to charge $4000 for heart surgery whereas the cost in America was $50,000. Moreover, in an interesting turn of events, while the costs increased in the US, in India it went down to less than $2000 and the clinical outcomes here have improved from 94 per cent to 99 per cent.”

Singh explains that excellent outcomes have been achieved despite the fact that over the years, there has been a steady increase of medical infrastructural and operational costs. Private hospitals are under great stress now due to increasing costs which include high salaries, interest burden, taxes and new additional GST of five per cent.

All these costs pose a significant financial strain on healthcare providers. As Indian health institutions contribute significantly to the economy through foreign exchange earnings from MVT. Hence, it is paramount that the Indian government and the people are made aware of this reality.

Adding to it Goel said, “While many actions need to be taken by the industry players and by the government collectively, individual hospitals would also need to set their goals and strategies to harness the MVT opportunity. While most hospitals, and rightly so, look at MVT as a business opportunity due to higher revenue earned per patient as compared to local patients, they also need to carefully look at cost of acquiring and serving an international patient and assess how profitable this business is,” he added.

Informing that cost-savings for instance, may not be enough for India to foster its medical tourism ambition. Industry experts opine that creating a unique and holistic care plan with an Indian touch is need of the hour. Certain limitations that India needs to overcome to compete with countries like Thailand and Singapore is to bring an all-appealing medical tourism destination.

Despite the country enjoying the benefits of the growing MVT market, in light of increasing vigilance on healthcare practices, it would be prudent if the country tightens its medical value travel policies, industry poised.

According to KPMG analysis, increasing consumer awareness and empowerment renders the situation even more critical. Government’s medical travel policies, regulations for medical travel facilitators and recommendations in the DGCIS’ study on registering and documenting MVT activities of establishments (healthcare and wellness) can help India find a spot of quality and trust on the global map of MVT.

“The sight of slums in its main cities, poor public infrastructure, and garbage strewn streets would unnerve the confidence of potential patients. Hospitals on their part have been very proactive and have achieved international quality accreditation. To re-emphasise clinical excellence that the country offers, hospitals should publish and publicise their clinical outcomes as compared to leading hospitals globally, independently validated by credible agencies,” Goel added. 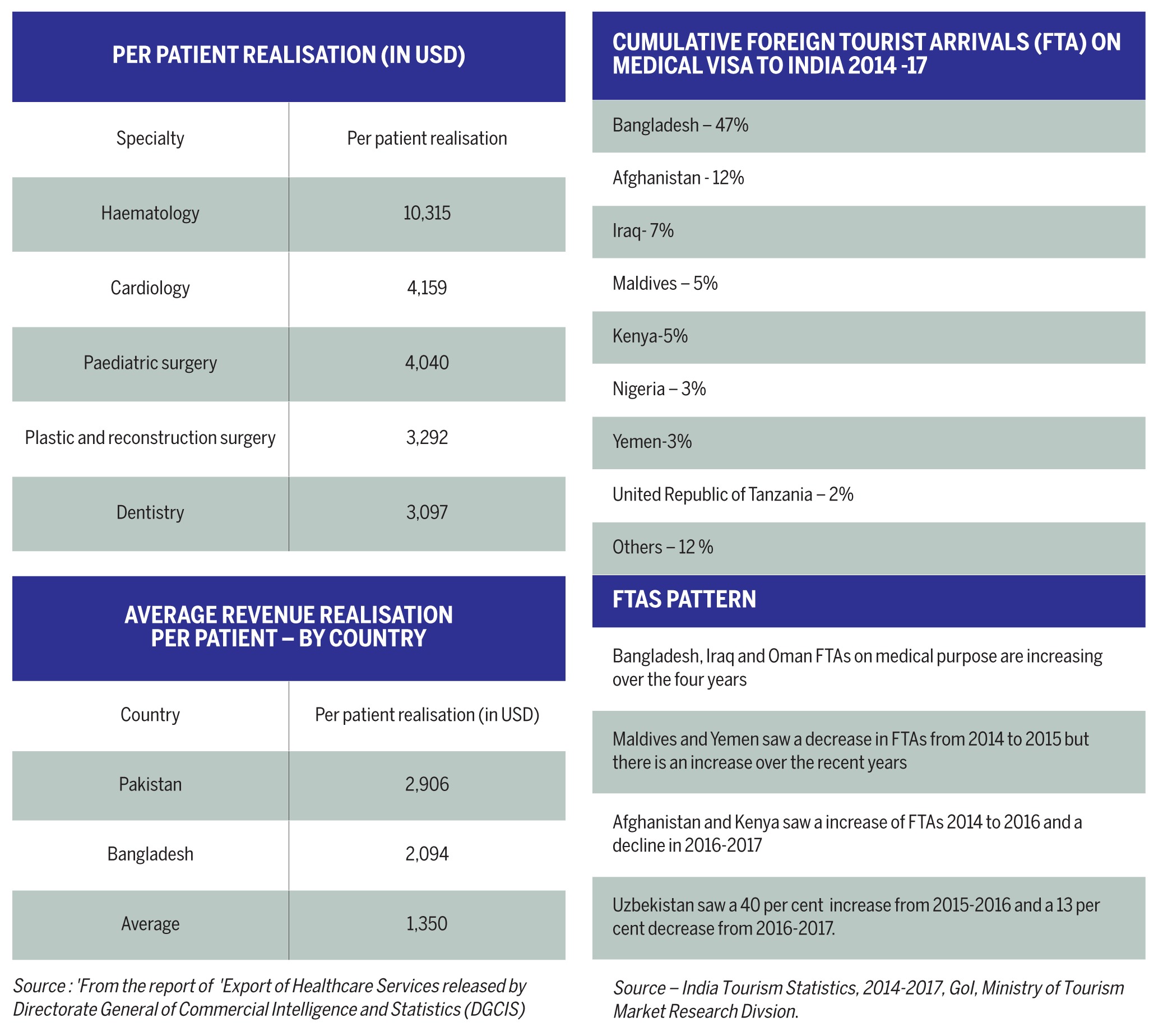 Kaushik further suggested that to boost the sector, India needs to adopt some innovative measures and policies, said, “First of all, there is need to have a single responsible body which is visible, accessible and through which the various medical systems which are interconnected can be reached by all. A National Medical and Wellness Tourism Promotion Board can surely act as a single body. The government has launched a healthcare portal www.indiahealthcare
tourism.com, as a single source platform providing comprehensive information to medical travellers on the top healthcare institutions in the country in English, Arabic, and Russian and French. A comprehensive online platform would be of a great help. Since, health is in state list, hence it would always be helpful if states make their own medical tourism policy by integrating Union Government’s actionable directives and guidelines.”

Highlighting that the central government needs to promote India as a destination for medical travel in key markets Anas A Wajid, Senior Director-Chief Sales and Marketing Officer, Sales and Marketing, Max Healthcare, said, “While, private hospitals are quite active in showcasing themselves, an integrated effort is needed, which can only be anchored by the central government. The government also needs to come out with certain guidelines regarding the minimum service levels that hospitals in India must provide to international patients. This is important to ensure that the international patients receive good quality care at all the hospitals. The rules regarding the medical visa needs to be made uniform. In many countries getting an Indian medical visa is a cumbersome process. The visa fee is not uniform and varies from country to country. The regulation of healthcare facilitators is a key intermediary in medical travel eco-system and it should be addressed by the government at the earliest.”

Giving insights on MVT’s potential, Sangita Reddy, Executive Director, Apollo Hospitals Group said, “MVT turns the foreign exchange, it validates India’s medical prowess to the globe. The international patients pay there bill fully whereas 50 per cent of all our patients are subsidised. MVT helps the health sector literally to do a cross subsidy. If you want the big private hospital to subsidises for schemes like Ayushman Bharat we need to earn and MVT is one segment which generates revenue. So far we have reached our neighbours Bangladesh, Pakistan, Sri Lanka, Commonwealth of Independent States (CIS) countries, Iraq, Afghanistan and even African countries. But the next tier international patients we need to attract are patients from European countries and US. For example, if India gets five per cent of US patients, it could be $130 billion sector which is larger than the IT sector. Now the government is partnering and focussing with the private sector and trying to ease out constraints.”

According to experts some leading hospitals are exploring incorporating alternate medicines in the form of Ayurveda, Yoga, Unani, Siddhi and Homeopathy (AYUSH) for international patients post surgery and they provide a complete cure plan. Such initiatives are actively promoted as it helps give medical treatments a unique Indian touch.

India is gradually heading towards becoming a strong player in this sector, yet it has a long way in this arena to serve global citizens through a combination of modern and traditional system of medicine. Getting more liberalised in visa regime, trying to empanel more medical facilitators, coordinating end to end facilities in various states and cities for the ease of medical value travellers will add value. As per industry experts consistent and coordinated efforts by both the private players and government will help to bring in the real meaning of Atithi Devo Bhava in the MVT segment.