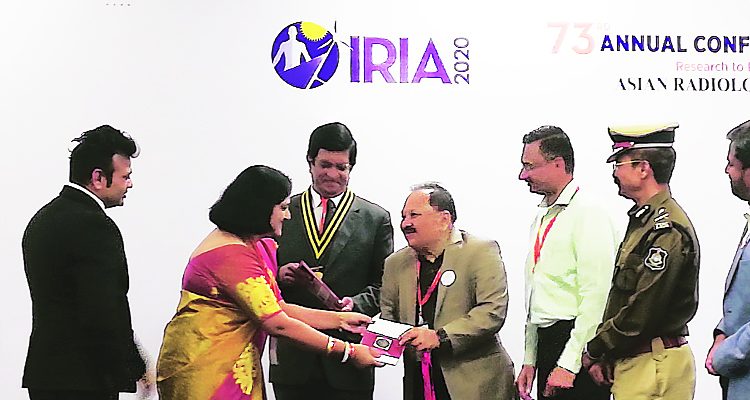 A training guide on gynaecology imaging was launched, which was published by Armed Forces Radiologist, Dr Isha Rajput

This year, IRIA 2020 paid tribute to the contributions of those radiologists serving the armed forces of India. The occasion was graced by Mayank Chawla, Inspector General of Police. Past President of IRIA, Dr Hemant Patel and Present President, Dr Deepak Patkar, industry veteran Dr Harshil Shah together inaugurated the ceremony.

During the event, Dr Patel also launched the book published by Dr Isha Rajput, a radiologist from the Armed Forces, on a training guide on gynaecology imaging. Dr Patel spoke about his experience working on the armed forces project that IRIA started last year. He extended his gratitude to all the radiologists working in the armed forces and saluted their dedication to the country as these radiologists work in very difficult environments with limited resources.

Dr Patkar, in his address urged the radiologists from the Armed Forces to be part of the training programmes conducted by IRIA.

Radiology in armed forces is more focussed on fieldwork, informed Group Captain Rohit. He presented the various challenges faced by the radiologists from the Armed Forces and how their determination and resilience helps them overcome these challenges. He mentioned the many landmark events that make the radiologists very valuable. Among the first sinologists trained abroad was Col RN Bagga who served the Indian Army. The first MRI installation in the country was at INMAS. He also informed the first DR installation in India in Army Hospital (Research & Referral Hospital), Delhi Cantt. The first Plane Digital subtraction Angiography lab in Asia was at Army Hospital (Research & Referral Hospital), Delhi Cantt and among the first 23 Tesla MRI was also at the Army hospital.

Captain Rohit also spoke about the varied challenges for an army and navy radiologist. The need is that these radiologists have to adapt to any environment despite limited resources and are expected to perform various roles during peacetime at medium/large hospitals. The radiologist also has to adapt during counter-insurgency operation situations, during combat radiology, disasters such as floods, earthquake and hurricanes and sometimes even during UN missions abroad. Captain Rohit also threw light on how radiologists perform during combat times and mentioned the various technologies used in the armed forces.

MRI can be a game-changer in lung imaging among children

PPE-clad COVID warriors now need not be ‘faceless’ to their patients,…