COVID-19 pandemic has spread far and wide and has been different from the other pandemics of the last few decades. In India, where the first case was reported on January 30, 2020, till date there have been 1,01,139 confirmed cases of COVID-19 with 3,163 deaths. Many countries worldwide, including India are under lockdown to avoid the spread of the disease. However, to fight the disease effectively, the need of the hour is – vaccines to combat the virus.

There are two broad categories of vaccines – prophylactic and therapeutic. While prophylactic vaccines make a person immune to the virus, therapeutic ones are for making body fight against the virus which has already entered the body. 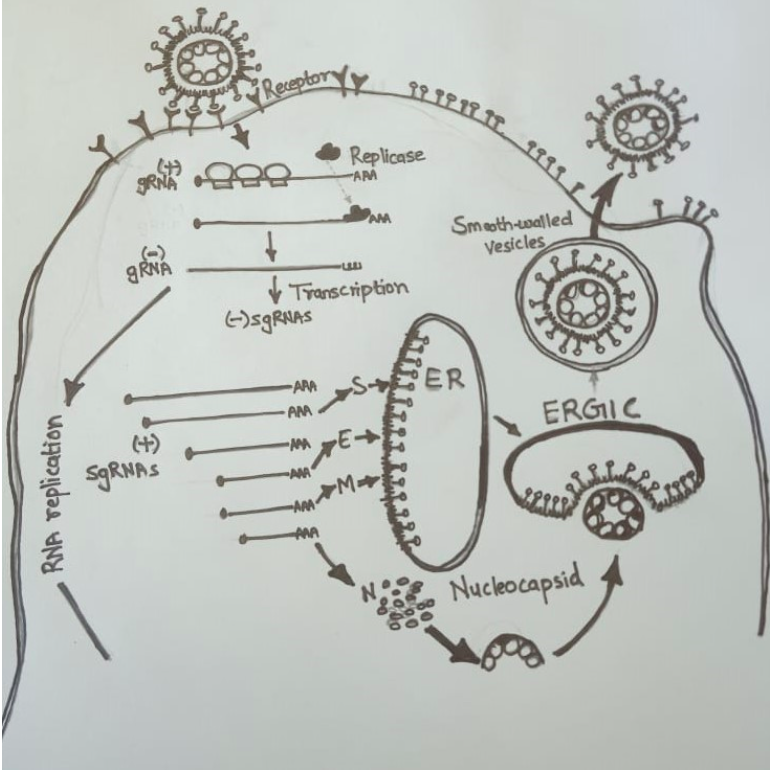 Many prophylactic vaccines are under trial world over but chances of those being mass produced and reaching India early on seem to be low. In India, due to low hospitals to population ratio, the focus should be on therapeutic vaccines to reduce the number of cases of hospitalisation.

Amongst therapeutic vaccines, repurposed drugs (using existing drugs for other diseases) should be our first line of attack against the pandemic. Other reasons for the focus on repurposed drugs are low chances of adverse reaction to the host (human) body as those drugs are already being used for treating other conditions. Also, these drugs can be used immediately and hence save many lives.

Repurposed drugs are being identified to interrupt or block different stages of the virus’ life cycle. Virus life cycle ranges from host cell penetration to self-replication inside the cell to exocytosis of new virions from the host cell.

For ease of understanding, we have categorised the repurposed drugs identified world over, as per the stage of the virus life cycle at which those are effective.

Virus entry blockers like camostat mesylate, a protease inhibitor, shown to inhibit TMPRSS2 (used for cleaving spike protein during virus entry). Its clinical trial for COVID-19 was started on April 3, 2020 (the drug is already licensed in Japan and South Korea for pancreatitis). The antimalarial drug, Hydroxychloroquine , can increase the endosomal pH required for virus-cell fusion and hence can potentially block the viral infection whereas another antimalarial drug, chloroquine phosphate, can target ACE2 cells. However, the study on these anti-malarial drugs in France led to no improvement in patients.

Virus replication blockers like Remedesivir and Favipiravir can interfere with RdRP (RNA dependent RNA polymerase) which is a viral generated protein responsible for intracellular sub-genomic RNA production. On May 1,  2020, Remedesivir was granted Emergency use Drug authorisation by US FDA whereas Favipiravir is emerging as one of the top drugs being recommended by CSIR (Council of Scientific and Industrial research), India. Ivermectin, a drug to treat broad spectrum parasitic infections, was studied by Australian researchers in-vitro and it was found that the drug was able to stop the virus replication. However, questions are being raised on toxicity of the dosage required.

Cytokine storm cytokine storms occur in viral infections when a large number of cytokines are produced. It is associated with multi-organ failure, which is frequently fatal. During infection from SARS-CoV-2, this cytokine storm is associated with increased levels of interleukins IL 2-2, IL-7 and other cytokines. A multi-centre, randomised controlled trial of tocilizumab (IL-6 receptor blockade, licensed for cytokine release syndrome), has been approved in patients with COVID-19 pneumonia and elevated IL-6 in China.

Recently Indian government’s CTRI (an arm of the Indian Council of Medical Research), has provided approval to conduct a randomised multicentre interventional clinical trial of a repurposed ayurvedic drug named as Zingivir-H. This drug, developed by Pankajakasthuri Herbal Research Foundation, an ayurvedic organisation from Kerala, is part of clinical practice for nearly 15 years for viral fever, acute viral bronchitis and contagious fever. It has been found to not have any side effects as per in-vitro experiments carried out at Rajiv Gandhi Centre for Biotechnology. It has seven ingredients including herbomineral and these ingredients are part of scientific manuscript. Additionally, studies have been carried out to check the efficacy of 64 naturally occurring flavonoids. Hesperidin, herbacetin, rhoifolin and pectolinarin were found to efficiently block the enzymatic activity of SARS-CoV 3CLpro.

As per latest statistics, the trial count of most popular allopathic drugs are as follows:

All the above drugs have been identified / shortlisted by researchers all over the world by using pre-existing drug repositories. Those drug repositories have been filtered / scanned to identify the ones with high affinity for virus proteins and hence leading to interruption of key activities of the virus during its life cycle.

Sifting through thousands of these drug repos and coming up with the most effective drugs in itself is a time-consuming process. Artificial intelligence(AI) and machine learning(ML) can serve as a booster for this search by narrowing down the most effective drugs amongst the lot which can be further studied by specialists of the pharmacology field.

One of the examples of usage of AI for identifying suitable drugs in-silico are: Deep learning-based models to predict binding affinities based on chemical sequences (SMILES) and amino acid sequences (FASTA) of a target protein. Drugs like Atazanavir, Remedesivir, Kaletra, Rapamycin and tiotropium bromide were identified as potential inhibitors of the SARS-CoV2 virus (Of these ramdesivir has recently been approved by US FDA).

In addition, many drugs under trial can be critically examined for adverse outcomes using these techniques. An approach known as PrOCTOR has been used to predict side effects of under-trial drugs using Random Forest and Principal component analysis. 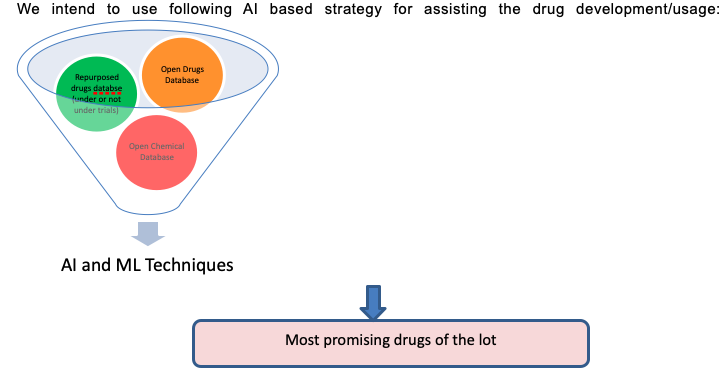 The drug discovery landscape, discussed here, shows that repurposed drugs is the fastest way to bring COVID-19 treatment to the general population. In addition to already approved repurposed drugs, there is a need for identifying more repurposed drugs. AI and ML can boost this process by quickly identifying drugs having efficacy against COVID-19 and hence bridge the gap between thousands of repurposed drugs, laboratory /clinical testing and final drug authorisation.

Embracing mechanism of telemedicine in developing country like India

The cost(value) of human life and disease prevention