INSACOG revs up to take on Omicron 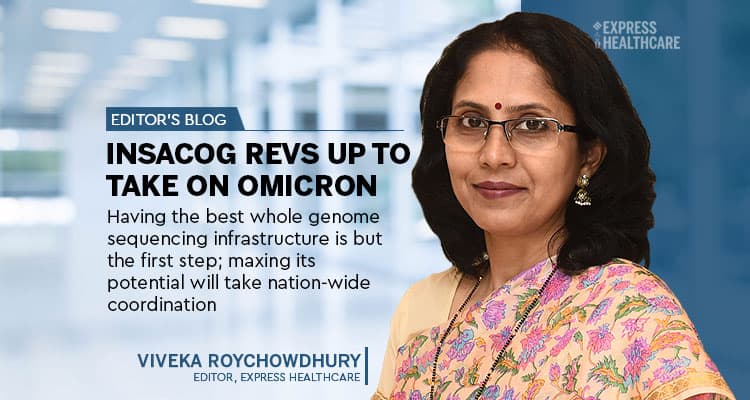 Having the best whole genome sequencing infrastructure is but the first step; maxing its potential will take nation-wide coordination

Two years after the SARS-CoV-2 virus took global centrestage, just when we thought we had it under control, comes news of another variant that seems to have more tricks up its corona than its predecessors.

With the world in pandemic mode, decision-making seems to happen in fast-forward mode. Just two days after authorities from southern Africa first reported the variant to the WHO, the UN agency designated it as the fifth variant of concern (VOC) on November 26, 2021.

Interestingly, on November 30, health officials from the Netherlands reported that the newly named Omicron variant turned up in two test samples taken on November 19 and 23, predating the southern Africa samples by a week. Thus, we have to assume that many more than the first two confirmed cases of Omicron from Karnataka are already present in India, and it is only a matter of time before more show up in tests.

An important aspect that might prove crucial in containment strategies is that current SARS-CoV-2 PCR diagnostic kits continue to detect this variant even though it has multiple mutations in some key areas. The WHO’s November 26 release mentioned that several labs indicated that for one widely used PCR test, one of the three target genes is not detected (called S gene dropout or S gene target failure) and went on to suggest that this test can therefore be used a marker for this variant, pending sequencing confirmation.

The Omicron variant is so far causing “very low hospitalisation” though patients experience “extreme fatigue even with mild disease” as per early reports from southern Africa’s health officials. However, in its November 28, 2021 update, the WHO cautioned that initial reported infections were among university students—younger individuals who tend to have more mild disease—and so understanding the level of severity of the Omicron variant will take days to several weeks.

The WHO’s statement that ‘the overall risk related to Omicron is considered very high’ underlines the ‘preliminary evidence on Omicron suggesting, in contrast to previous VOCs, both potential immune escape and higher transmissibility that could lead to further surges with severe consequences.’

With concerns that reinfections may be higher, India’s focus on expanding COVID-19 vaccine coverage must include an aggressive ramp up of testing, and more importantly, whole genome sequencing of a higher percentage of positive samples.

Mindful of the criticism that when the Delta variant was on a rampage, India did not test enough or share sequencing data with global agencies like GISAID fast enough, there are reports that more than a dozen labs will be added to the existing 38 labs of the Health Ministry’s Indian SARS-CoV-2 Genomics Consortium (INSACOG).

If the past two years was about putting in place the bullets (vaccines, medicines, convalescent plasma etc) to fire at the enemy, this time it is about strengthening the radar to detect the stealthy intruder, getting past attempts at camouflage and subterfuge.

So,India’s year old initiative to ‘study and monitor genome sequencing and virus variation of circulating strains of COVID-19 in India,’ INSACOG now becomes an even more vital part of our anti-COVID arsenal.

The good news is that the pandemic has cut down our overall response timelines. Union Health Secretary Rajesh Bhushan’s first advisory letter to the states on the new variant was on November 25, a day before WHO declared it as a VOC.

These daily advisories now have to translate into effective implementation at the state and district levels. As INSACOG gears up for this latest stress test, having the best infrastructure is but the first step; maxing its potential will take nationwide coordination.

But with Prime Minister Modi himself alluding to this vital gap, speaking about the need to ‘increase the sequencing efforts and make it more broad-based’ in his November 27 briefing on Omicron, one hopes that INSAGOG will see a better response this time around.

As of November 30, 2021, of the 70471 genomes characterised by INSACOG, Maharashtra accounts for 27.4 per cent, Kerala 9.9 per cent followed by Delhi at 8.2 per cent. However, geographically vast states like Uttar Pradesh contributed 1.5 per cent to INSACOG, a clear indication that more work needs to be done on the ground to work out the kinks in supply chain and logistics etc.

PM Modi’s nudge was followed on November 30 by Dr Balram Bhargava, Secretary (Health Research) and DG ICMR, informing state health officials that the Omicron variant doesn’t escape RT-PCR and rapid antigen tests (RAT) and advising them to ramp up testing for prompt and early identification of any cases.

Manufacturers of RT-PCR and RAT kits like Thermo Fisher, Abbott and MyLab have assured us that their RT-PCR and RAT test kits can still detect Omicron, even with key mutations in the S-gene / spike protein.  Similarly, even though it will take at least two weeks for conclusive evidence, vaccine makers claim that their shots still work, or that they are already working on new vaccines to cope with new variants. This time, the search is on for variant-neutral vaccines and test kits that will at least theoretically offer broader and longer protection.

The fact is, Omicron will not be the last COVID-19 variant, even if fears about its increased transmissibility and immune escape leading to increased mortality prove to be unfounded. Omicron could fizzle out in a month or upstage Delta.

But the gift of this pandemic should be, and I am sure will be, a resilient public health system, which is really the only long-standing defence that we have to build and be part of. Each adversity comes with its own lessons. It is up to us to learn them well.

80-90 per cent of patients with COVID likely to have underlying heart damage: Experts