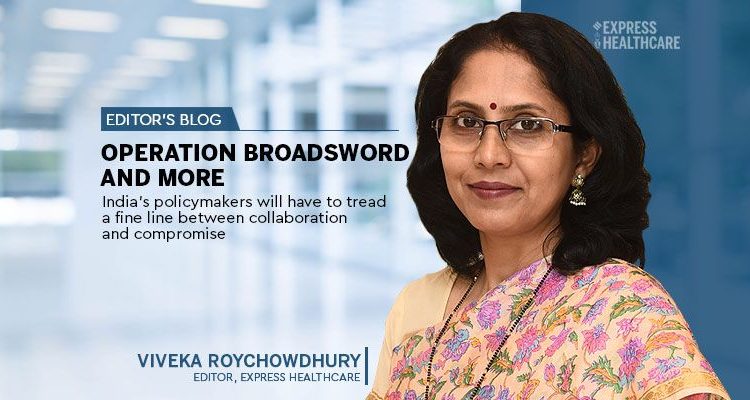 India’s policymakers will have to tread a fine line between collaboration and compromise. Coordination and collaboration between the regulators of the US and India seems to be at an all-time high. Whether it was all geared up to creating ‘good optics’ as a build-up to President Trump’s two-day visit in end February or a more long-term strategy remains to be seen. More importantly, how will these alignments impact patients in India?

For instance, on February 18, the US FDA announced that in its first bilateral enforcement operation with the Government of India, it had stopped approximately 500 shipments of ‘illicit, and potentially dangerous, unapproved prescription drugs and combination medical devices from reaching American consumers over the course of an operation that took place in January.’

Codenamed Operation Broadsword, the operation targeted packages entering the US through the international mail facility from January 28 to 30.

The operation was a collaboration between the US FD’s Office of Regulatory Affairs, Office of Criminal Investigations, Forensic Chemistry Center and Division of Northern Border Imports along with the Government of India’s Central Board of Indirect Taxes and Customs and Directorate of Revenue Intelligence and US Customs and Border Protection.
According to a release, during the operation, investigators from both governments examined more than 800 shipments, which identified approximately 50 different FDA-regulated products, including medications intended to treat and or mitigate serious diseases, such as various forms of cancer and HIV. Many of the shipments, which included opioid drugs products, had been transshipped through third-party countries to conceal their point of origin and avoid detection.

The operation could have been a crackdown on illegal online pharmacies as the US FDA announcement goes on to caution that patients who buy prescription medicines from illegal online pharmacies, ‘may be putting their health at risk because the products while being passed off as authentic, may be counterfeit, contaminated, expired, or otherwise unsafe.’

In addition to health risks posed by these products, the release points out that ‘illegal online pharmacies can pose other risks to consumers. These include the risk of credit card fraud, identity theft and computer viruses.’

While lauding such efforts to protect the health of citizens, especially the own in the US, one hopes that regulators in India do not compromise the interests of Indian citizens. This is why President Trump’s visit to India had health activists on alert. Their worry was that the much-touted mini-trade deal between the two countries would dilute India’s IP laws or roll back the price caps on medical devices. The unease prompted India’s commerce minister Piyush Goyal to reaffirm that price cuts on medical devices and drugs would not be withdrawn.

However, this scepticism seems well-founded. India had recently signed an MoU with the US under which the latter will ‘train’ IP lawyers from India. While the details of the MoU were not made public, there are concerns that this training will try to make the lawyers more sympathetic to the interests of US-based companies.

This MoU is being seen as just the latest initiative to change India’s stance on IPR. Another long-standing tactic is to praise India’s ‘progress’ on the IP front using its own metrics.
For instance, India’s ranking in the latest edition of the US Chamber of Commerce Global Innovation Policy Center (GIPC) IP index has improved over the last few years. From being placed last among 25 countries in 2014, India ranked 40 out of 53 countries in the 2020 edition.

But IP experts point out that this index serves the interests of the US rather than India. Thus, an improved ranking may not be an improvement for India’s public health commitments, especially if it means diluting sections of India’s IP laws like section 3(d) which is a safeguard against evergreening of patents. The deadlock continues but who will blink first?

President Trump’s visit ended with a short announcement at a joint press conference that India and the US had signed two pacts in health. While one was an MoU on mental health between the health departments of the two countries, the second MoU between the Central Drugs Standard Control Organization with the US Food and Drug Administration was on the safety of medical products, especially generic medicines.

Medical device manufacturers are lobbying for ways to bring down prices, with each faction proposing strategies. While the government will have to collaborate to ensure medical devices remain accessible, they cannot compromise on their affordability. The deadlock continues but who will blink first?

‘Time is very crucial for a sports player’

No magic bullet for COVID-19

Making the right COVID choices in 2021