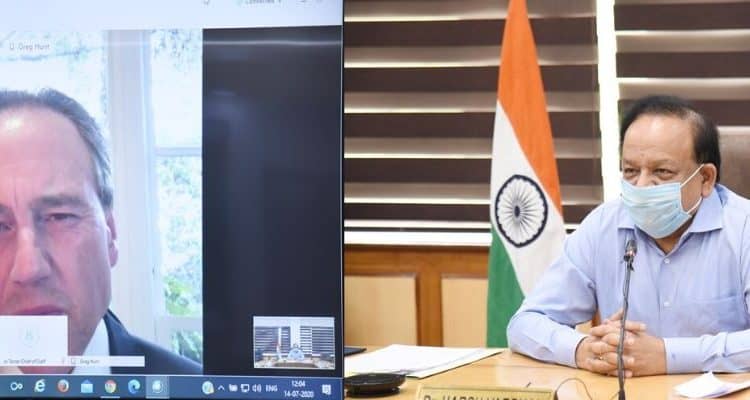 India and Australia have signed an MoU on co-operation in the field of Health and Medicine on April 10, 2017. The MoU covers areas of mutual interest like the management of communicable diseases like malaria and tuberculosis, mental health and non-communicable diseases, antimicrobial resistance, regulation of pharmaceuticals, vaccines and medical devices and digitisation of health infrastructure. The MoU also covers response to public health emergencies like the present COVID pandemic.

At the outset, Dr Vardhan expressed deep admiration for Hunt for his organisation of charity events like a 5-km run for children suffering from autism and raising awareness on juvenile diabetes. Speaking on the need for working together, Dr Vardhan outlined and said, “While Australia has one of the best healthcare systems of the developed world, healthcare in India is one of the fastest-growing sectors expected to hit $275 billion marks in the next 10 years. India’s domestic demand is expected to engine the growth regardless of any turbulence in the global economy. India also offers vast opportunities in R&D and medical tourism.”

Dr Vardhan elaborated on ‘health as a social movement’ approach of Prime Minister Narendra Modi “India’s Universal Healthcare Coverage (under Ayushman Bharat) covers a massive 100 million families; 10 million individuals have benefitted in the last year alone; India is committed to eliminating TB by the year 2025; India has also undertaken efforts for mass screening of non-communicable diseases like hypertension, cancer of breast, lung, throat and mouth, etc; India has also made strides in implementing the Digital Health Blueprint to modernise the health sector and enable streamlined delivery of services to the last citizen; affordable medicines that treat cancer and cardio-vascular ailments and cardiac implants are made available to the poorest of the poor under the (Affordable Medicines and Reliable Implants for Treatment (AMRIT) programme.”

He also added that the Prime Minister’s ‘Whole of Government’ perspective enabled financial inclusion of 400 million people and transformed their access to healthcare.

Hunt spoke of the trust Prime Minister Modi espouses in the international community. Australia’s Universal Telemedicine has helped tackle 19 million cases, so far, he stated. Its focus on health infrastructure through public and private hospitals and approach on mental health issues are models worth emulating, he stated. Acknowledging India’s huge role in supplying inexpensive generic drugs supplying 60 per cent of the world’s medicine, he expanded on how India could help Australia in researching new medicines for rare diseases using genomics and stem cell technology.

Elaborating upon the role of India’s medical community in containment and management of the pandemic, Dr Vardhan noted that India’s medical professionals, paramedics and scientists have played a pivotal role in containing COVID-19. He stated that they are helping in drug discovery and in the repurposing of existing drugs. They have also isolated the virus in the early onset of diseases and are engaged in studying the virus using Genome sequencing.

“From just one lab to test the virus in January 2020, India now has more than 1200 labs all across the country facilitating the people in widespread testing, he further added. India’s drug manufacturers have also enabled India to supply hydroxychloroquine to 140 countries.”

The health ministers agreed to continue to jointly work in the area of health and other common interests.