Ayushman Bharat | All set to shake things up 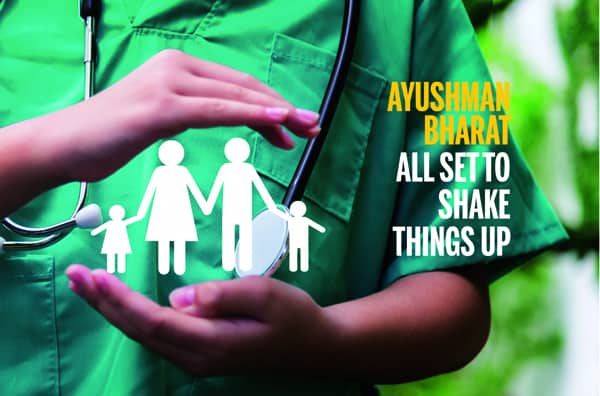 The government’s big-ticket reform – Ayushman Bharat – Pradhan Mantri Jan Arogya Yojana (PMJAY), is all set to take flight. The first phase of the world’s largest health insurance plan will be rolled out in 14 states and two union territories on September 25. The programme intends to change the healthcare landscape of the country by providing a insurance cover to 10 crore households, i.e. 50 crore individual beneficiaries with INR 5 lakh per family per year. The ministry officials handling the scheme tout it to be a revolutionary scheme and a boon for the Economically Weaker Sections (EWS) who are usually pushed into a debt trap due to healthcare costs. 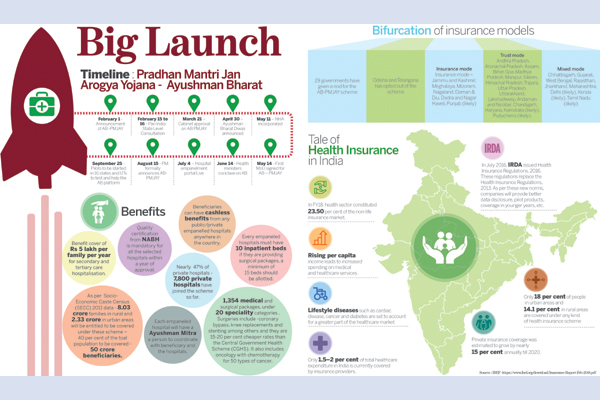 After unfurling the Indian flag on 72nd Independence Day at the ramparts of the Red Fort, Prime Minister Narendra Modi, announcing the official launch of AB-PMJAY said, “On 25th of September, the birth anniversary of Pandit Deen Dayal Upadhyaya, the Pradhanmantri Jan Arogya Yojana (PMJAY), will be launched throughout the country. No poor person of the country will have to face difficulty in dealing with diseases. Nor he would have to borrow money from a moneylender paying interest. The scheme will open new avenues of employment for the youth as well as for the middle class families in the health sector. New hospitals will be built in the tier-II and tier-III cities and a lot of employment opportunities will be generated.”

Informing that beneficiaries were almost equal to the combined population of the US, Mexico and Canada or of the European Union, he said, “The common man gets free treatment for serious diseases and he can be admitted to big hospitals free of cost. In the coming days, people from lower middle class, middle class and upper middle class income groups can also access healthcare services from these two programmes. This is a technology-driven system which is transparent. As such, an ordinary citizen will not face any difficulty as technological tools have been built for this purpose.”

The services include more than 1300 procedures that covers pre-and post-hospitalisation, diagnostics, medicines etc. Beneficiaries are able to move across borders and access services across the country through the provider network seamlessly. Though the scheme looks optimistic, healthcare experts indicate that nationally mandating a health insurance system needs to improve the quality of government infrastructure pan India and offer better opportunities for the private sector at a right price. The central government is trying to align with state governments and woo private players. The PMJAY is trying to create a major shift in reshaping the horizon of public healthcare space, but the proof of its success lies in its implementation.
In this issue, stakeholders of the healthcare industry viz insurance companies, policy makers, med tech players share their views and opinions about ‘AB – PMJAY.’

Next article: AB is a welcome step in the direction of achieving Universal Healthcare | Ashish Modi

Vision to make SafeZindagi a virtual clinic for the “Swiggy” generation