Home  »  Interviews  »  There will be a new wave of integrated diagnostics’

There will be a new wave of integrated diagnostics’ 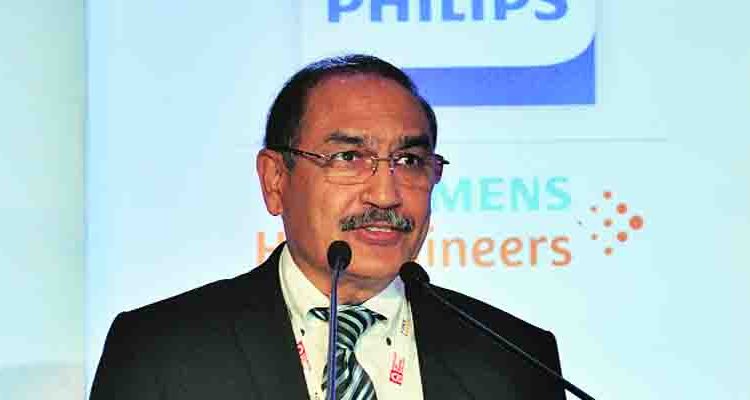 Recalling the progressive history of radiology’s sector in India, Dr Harsh Mahajan, Founder & Chief Radiologist, Mahajan Imaging shares some interesting turning points in his entrepreneurial journey. He also speaks of the contributions of GE Healthcare as his technology partner and how the radiology practice will shape the future of healthcare in India, in a chat with Express Healthcare

How was the Indian healthcare scenario way back when you first started your career, in particularly the radiology sector?
When I started my career, India was way behind the rest of the world as far as healthcare delivery was concerned, especially when it came to radiology. It is interesting to note that in 1988 when I came back from the US after completing my fellowship in MRI from MD Anderson Cancer Hospital in Texas, India had only one MRI machine in the country and very few CT scanners. We were pretty backwards in the real terms. Also, private healthcare hardly existed in those days. Apollo and Escorts were just starting off. People did not have much access to good quality healthcare services and in particularly radiology services were extremely scarce.

No government hospital had an MRI machine back then. The first MRI machine was installed in the DRDo lab of the Institute of Nuclear Medicine & Allied Sciences (INMAS). I actually came back to work in this lab because at that time I was the only MRI trained person in the country. Now the irony was that despite me being the only trained person for MRI, it took them around one year and nine months to complete my appointment process.

So when did the transformation begin? How have patient outcomes changed in terms of affordability, access and clinical outcomes/ efficacy?
Major transformations happened during the late 90s and 2000s. It was the commitment of companies such as Wipro and GE Healthcare, which helped us bring in the best technologies in the country and improve the quality of care to our people. The progress has been such that today access to radiological services has improved tremendously, the quality of diagnosis has become top-notch and the affordability has also been taken care in many ways through government schemes etc. But most importantly, the maximum development began when India started to get the best medical technologies that help expand our diagnostics ability and treatment mechanisms, thanks to companies such as GE Healthcare. India’s developmental journey in healthcare has been very impressive. Many new technologies are first introduced in India and then marketed in the rest of the world. That’s something we should be proud of as our market has matured so well.Today, we are developing AI algorithms for radiological sciences and fostering research in this space. This is indeed very noteworthy.

So how did your entrepreneurial journey played a role in this transformation? So how did you procure your first MRI?
My decision to venture into business was in 1989. I came from a very humble background. My parents were teachers and in those days think of starting a business was an unproven idea, especially in my field. However, after I convinced my parents, I was able to convince four of my uncles who did the initial investment and then my dad’s friend who was a businessman also got interested. My uncle never took back that money that they lent. I started with an initial investment of Rs 6.85 lakh. At the time the dollar was around Rs 16. We then rented a place for the first centre and spoke GE Healthcare. The machine cost nearly 2.5 crores and so we approached the banks. But then came the hassle of getting the loan. Now in those days getting a loan worth, a crore was extremely difficult. After a lot of hard selling to the banks and because the loan amount was too high, IFCI and ICICI agreed to share the loan amount. The interest rate was 27 per cent for that loan especially to get a life-saving technology in India. The import duty was 204 per cent initially with a condition that we had to do 40 per cent cases free, after which our duty would be exempted.

Now, at that time there was a shortage of foreign exchange in the country and so we had to wait for the letter of credit. With hard work and more, I was able to get the first superconducting MRI by GE Healthcare in 1990. At that time there were no MRIs in this part of the country. So we serviced people from Jammu & Kashmir, Punjab, Haryana, UP, Bihar, MP, Odisha, North East, Delhi of course, and more. The MRI really did very well. AIIMS and PGI also got their MRI after us and GE Healthcare was very supportive. After which it took about 8-10 years for the technology to be available to all.

Another important milestone was in the year 1990 when Wipro joined hands with GE Healthcare. Prior to this, the company functioned in India through various dealers, but these partnerships actually changed the face of diagnostic imaging in India. It was also the time when one could clearly understand that the company saw the immense potential in the Indian market and that they were very serious in establishing their business in this country.

Also, over the years GE Healthcare has shown leadership in many ways.or example, in 1997 the best 1.5 Tesla MRI that they made which had functional imaging tools like diffusion, perfusion and bold imaging (GE Healthcare’s Signa Echospeed, Signa LX Echospeed machine) was first brought to India and then to Canada and third went to the US. So, that was their commitment and our potential.

How did it improve clinical value?
It really made a huge difference in clinical outcomes, in terms of precision, efficiency and more. It opened so many avenues for radiological progress in varied areas.

Can you mention some of the major disruptions in the field of radiology?
Well, over years apart from MRI technology, a lot of disruption happening after the multisliced CT was introduced. At that time when MRI was experiencing an ascending growth where it was explored in many areas of chest diagnosis, pelvis, brain, spine, abdomen and a lot more, CT was said to fade out or had a sluggish growth. But the introduction of multislice CT in 2003- 2004 everything changed. And then the other disruption came with the PETCT.

Now PET was around when MRI was introduced but somehow the technology remained just a research tool and MRI got more prominence. Nevertheless, when CT got married to PET, that’s when the disruption came. PET/CT became the number one growth area for any imaging modality.

What kind of trends do you see maturing and creating an impact on healthcare delivery in India?
AI is the next big technology that will replicate the task that the radiologist does. It will become the radiologist assistant making the radiologist more accurate and efficient. Pick complex abnormalities. It will increase productivity and also make up for the shortage of radiologists in the country. It will create more access and in the long run, help to prevent illnesses.

The other area that will see traction is radio-genomics. The convergence of radiology and genomics has an immense scope that currently a lot of efforts are put in understanding this field better. I personally feel that there will be a new wave of integrated diagnostics where a radiologist will be best suited to become the integrated diagnostic specialist who can diagnose everything and give a synopsis of the examinations and take decisions as well.

This year marks 30 years of Wipro GE in India and you have had a long-standing association with GE Healthcare. In your lens, how have you seen their role in this healthcare transformation?
GE Healthcare has always been very supportive in terms of helping us upgrade our machines at the right time with the latest technologies and at affordable costs. They have always helped us bring the best in India and have also catered especially to our market’s needs. They have been very focussed on quality and patient care and that’s why our association with them has worked for so long.