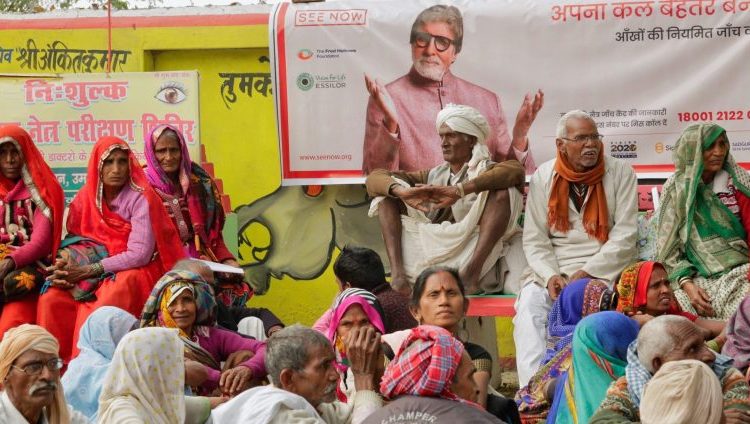 The campaign will be running from February 6, 2020 till March 15, 2020, during which implementation partners will be setting up 260 eye health centres

Amitabh Bachchan recently launched an expansion of his See Now campaign in over 30 districts across Uttar Pradesh to end avoidable blindness. He said, “The single most important thing you can do for the future of your family, your community and your country, is to go and get your vision checked. Vision loss has an impact on your personal life, but it also impacts our economy. And the only way to ensure that you can see the future of your family and India, is to get your vision checked.”

With 550 million Indians suffering from poor vision, the impacts to the Indian economy through lost productivity has been estimated in the tens of billions of dollars – with a much larger impact occurring to the personal lives and families of those people. To increase awareness of eye healthcare and drive service uptake in Uttar Pradesh, The See Now campaign has been launched in 34 districts across UP, with Bachchan as the brand ambassador. A pilot phase of this campaign ran earlier in 2019 and covered only five districts, the success and direct need for such services has prompted all those involved to dive deeper during phase two.

The campaign, which is now in its second phase will be running from February 6, 2020 till March 15, 2020, during which implementation partners will be setting up 260 eye health centres in the form of general community camps as well as screening 50,000 school students.

Residents in these districts are being informed and reached out via different channels such as radio, television, billboards, door to door campaigning and even have access to a missed call number and call centre arrangements through which they can receive further information on the eye camp and centres closest to them. The main objective of the campaign is to provide quality eye care to vulnerable and marginalised groups and highlight the urgency and importance of good vision, regular eye check-up, eye care and also breaking the myths and stigma around wearing spectacles and glasses.

Shocking statistics around eye health care in India have set the stage for this much needed campaign. According to a survey, 53.2 crore people in India need vision correction, out of which only 17 crore people are able to access treatment. Most of these impacted people come from the lowest strata of society. 80 per cent of India’s population suffering from blindness comes from rural areas where every 250,000 people have access to only one ophthalmologist. The differences in gender are also stark, 67 per cent of total eye patients are women and they reach 40 per cent fewer eye services than men.

Annual productivity took a hit of $ 37 billion due to eye diseases.The first step towards lies in raising awareness on the issues around eye health care and the urgency associated with this. Bachchan pledged his support to the campaign by urging people to get their eyes checked at registered camps and at government recognised centres. He himself wears eye-glasses and wants people to see him and be encouraged to use vision correction solutions such as spectacles.

The See Now campaign has been made possible through collaboration by renowned organisations and corporate partners across the eye health sector, including The Fred Hollows Foundation, Essilors Social Impact Fund Vision for Life, SightSavers, Sadguru, Indian Vision Institute, Operation Eyesight Universal, Mission for Vision and VisionSpring – among other local partners.

Nick Martin, Deputy CEO, The Fred Hollows Foundation said he was encouraged by the response from the phase one pilot in Uttar Pradesh last year. “The campaign resulted in an increase in eye screenings across our partner eye camps and more people attended camps in Lucknow. “With the support of our partners on the ground for this latest campaign, we can ensure more people are able to work, provide for their families and improve their quality of life.”

Commenting on the launch, Jayanth Bhuvaraghan, Chief Mission Officer, Essilor International and Essilor Luxottica said: “Raising awareness about eye health is critical to our ambition to eliminate poor vision from the world in a generation. The support of Amitabh Bachchan for the cause and working with The Fred Hollows Foundation and other like-minded organisations, gives us the collaborative confidence and energy to achieve even greater reach and awareness with See Now.”

For all those living in Uttar Pradesh in the specific districts mentioned above can give a missed call to 18001 2122 0002 to get information about the nearest Eye Health Camps and Centres or head to seenow.org/india. Take along all your friends and family for the check up today!

The Right Choice: AI to drive the future of Indian healthcare according to GOI budget

DKMS-BMST Foundation India completes one year of operation in India