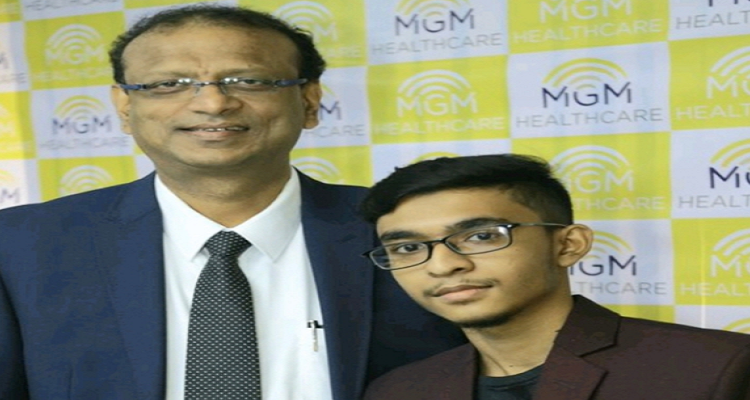 MGM Healthcare has announced a successful rare endoscopic surgery performed on a 13-year-old boy from Bangladesh who was suffering from recurrent JNA (Juvenile Angiofibroma). JNA is a rare, benign, nonencapsulated highly vascularised benign tumour that is generally located in the nasopharyngeal region that primarily affects adolescent males; accounts 0.5 per cent of all head and neck tumours and has a 1:1,50,000 general occurrence. However, occurrence of recurrent JNA is extremely rare.

The boy was admitted to MGM Healthcare with spontaneous recurrent nasal bleeding. He had undergone surgical treatment for the same elsewhere around a year ago. Throughout the post-operative period after the first surgery, he continued to bleed through the nose almost every day. Clinical examination, at MGM Healthcare revealed recurrent vascular tumour mass occupying the same area of the pterygopalatine fossa, maxillary and sphenoid sinuses abutting the left orbital wall.

Explaining the rare medical condition, Dr Mohanty said, “Nasal obstruction and epistaxis are the main symptoms of JNA. Although it is a benign tumour, local destructive pattern with bone erosion is a potential progress of the tumour which can result in morbidity such as severe unprovoked, spontaneous nasal bleeding, as was the case with this boy. Surgery is accepted to be the best treatment option for JNA. Endoscopic, craniofacial and combined approaches can be used according to the tumour size, location and extent. Usually, preoperative embolization of the major feeding vessel of tumour is done before surgery as the standard of care. However, in this case, the feeder vessels were from the internal carotid system, which makes surgical management very difficult and challenging.”

On the operation day, the patient was intubated in the Department of Neuroradiology, where selective angiography was performed by both femoral artery punctures. To the doctors’ surprise, the main feeding arteries were from the Internal Carotid Artery (ICA) and its branches. Hence, the plan to embolize the feeding vessel was abandoned in view of the risk of stroke, and even blindness. After an informed consent from the parents, the boy was taken up for surgery with an intent to start with an endoscopic trans-nasal surgical approach without any external incisions, but, to convert to open surgical approach if need be with adequate blood products to transfuse as a back up to minimise peri operative risks all round.

The recurrent bleeding tumour was carefully dissected out and totally removed without any injury to the dura mater, cavernous sinus or optic nerve. Intra operative hypotensive anaesthesia and good instrumentation, including use of modern energy devices, helped control intra-operative bleeding and without any need for blood replacement. The operated area was covered with fibrin glue to facilitate good healing during the period of convalescence.

Speaking on the occasion, Dr Prashanth Rajagopalan, Director, MGM Healthcare, said, “MGM Healthcare will go leaps and bounds to deliver its mission of bringing quality healthcare services for all. At MGM Healthcare, we believe only in the best — the best of technology, the best of infrastructure but most importantly, the best of clinical expertise. We have a plethora of highly specialised medical professionals from across the country.”