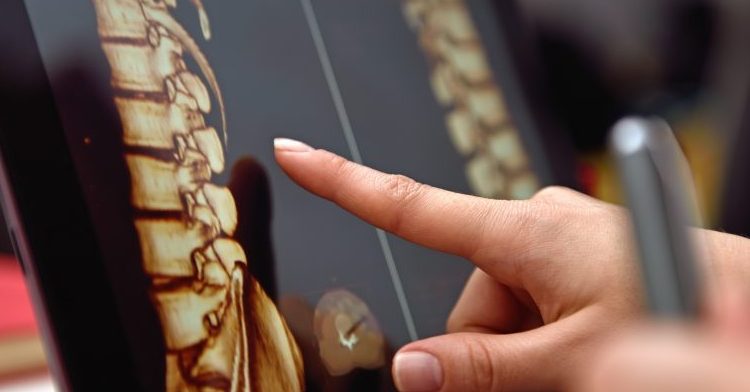 The exact causes of an individual’s back pain may be better understood after UNSW Sydney researchers improved the accuracy of MRI scans of spinal discs using a new technique they call ‘decay variance’.
In a paper recently published in JOR Spine, the researchers show how they captured spinal disc degeneration in rabbits using the new decay variance technique, where they achieved an accuracy rate of 97 per cent. In other words, when they compared the image of the disc with the actual disc in a post-mortem examination, the actual disc matched the image 97 per cent of the time. Using traditional MRI methods (called T2 weighted MRI), the images were found to match the actual discs only 70 per cent of the time.

Study lead author Dr Kyle Sheldrick, UNSW Medicine’s St George and Sutherland Clinical School, said, “The results are promising and may enable doctors and radiologists to more accurately pinpoint the cause and location of a patient’s back pain. Back pain affects about one in six Australians but in 95 per cent of cases, doctors (including me and my co-authors) can’t find any cause. This not only makes it very hard to treat individual patients, but also makes it very hard to find new cures for back pain. Experts think degeneration of the spinal discs is a cause of back pain but current tests for disc degeneration don’t work very well. Patients with discs that look healthy on MRI often have severe back pain and patients with discs that look very degenerate on T2 MRI often have no back pain, so better technology is needed.”

Senior author Dr Ashish Diwan, Orthopaedic Surgeon, St George Hospital says, “While MRIs have been especially helpful in creating pictures of soft tissues that don’t show up on X-ray examinations, the technology itself is not perfect. Most people wouldn’t realise that what the MRI produces in images is not necessarily an exact representation of what is actually going on in a patient. Now for the first time we’ve been able to demonstrate that MRI technology still has considerable room for improvement – and we’ve shown how it can be done. Current techniques see how quickly or slowly individual atoms line up with a magnetic field after a strong burst of radio waves – this is called signal decay. Comparing the new technique with what is currently used by radiologists in clinical practices. Instead of trying to figure out how fast or slow this signal decay is, our technique measures whether the atoms in a sample are lining up at the same speed as each other, or a range of different speeds – hence decay variance.”

Dr Sheldrick said “Disc degeneration is a really complex process, with a combination of lots of changes happening at a microscopic level, not just one simple change. Some of the changes, like dehydration, make the individual protons line up faster while other changes, like loss of some long chains of sugars, should make them line up slower, so a really simple measure like the speed with which they line up on average won’t capture the process very well because a lot of the changes cancel each other out. The technique does not require any new or advanced MRI machinery and can be used on virtually all current scanners. In fact, we’re starting a trial later this year using a current Medicare licensed scanner in Sydney that will be scanning clinical patients during the day and doing our trial at night.”

The trial he alludes to will see the application of the decay variance MRI technique to human patients for the first time, as part of a study funded by Swiss not-for-profit, AO Foundation. Dr Sheldrick further added, “It is important that the MRI technology is advanced for diagnoses in back pain for humans, because at the moment our ability to tell where back pain is coming from is rubbish. This holds back research, and our progress in treating back pain has been minimal, with 95 per cent of people with back pain having no known cause.

“Trying to find treatments for chest pain wouldn’t make any progress either if heart attacks, pleurisy, pericarditis, pneumonia, rib fractures, lung cancer and pneumothorax were all grouped together as ‘non-specific chest pain’. I don’t believe we will make serious progress with finding new treatments for back pain until we know what’s causing it in each person.”

Dr Sheldrick says the inability of doctors to determine the cause of back pain leads to a “one size fits all approach to medicine, in which 95 per cent of people get the same treatment”.
“Even without finding new treatments, being able to classify people based on the cause of their back pain opens up new avenues for personalised medicine,” he says.

Dr Sheldrick says that using more accurate decay variance technique to diagnose back pain using MRI is probably about three years away from being available to doctors and the general public for clinical use.

Revenue cycle intelligence: The need of the hour