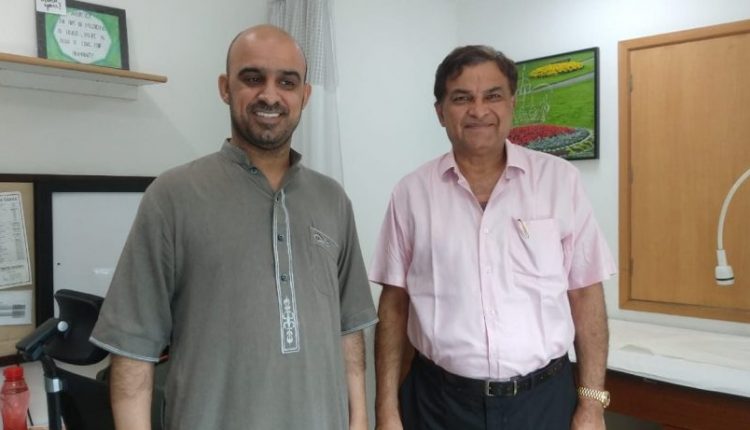 The Department of Minimal Access, Bariatric and Gastro Intestinal Surgery, Fortis Memorial Research Institute (FMRI), Gurugram performed a rare laparoscopic surgery to permanently cure type II diabetes in an Iraqi national. Ayad Khadim Shawal Al-Elay Awi, 43 years, had been suffering from type II diabetes for the past 15 years and was on the verge of multi-organ failure. Despite multiple medications, his condition was beyond control. A team of doctors led by Dr Ajay Kumar Kriplani, Director and HOD, Department of Minimal Access Bariatric and GI Surgery (MABGIS), FMRI performed the ‘Ileal Interposition’ via laparoscopy to permanently cure the patient’s diabetes. Ileal Interposition surgery is a new and evolving concept.

On presentation, Awi had an incredibly high blood sugar (PP) of 354 and a blood sugar (fasting) of 218. The average range for the same is 150 and 110 respectively. Despite taking medication for the last 15 years, there had been no improvement in his condition. His diabetes gradually spiralled out of control. Since he was seeing no results, Awi stopped taking the medications three months prior to his presentation at the hospital.

Awi shared, “I was on regular insulin for 15 years and despite that my diabetes was unmanageable. When I heard that diabetes can be completely cured with a surgery, I had to get it done. I had my surgery 15 days back and I have not taken a single medicine for diabetes since then. My sugar levels are controlled, and I am happy that I can lead my life free of diabetes now.”

Congratulating the team, Dr Ritu Garg, Zonal Director, FMRI said, “Ileal interposition or diabetic surgery is a lifeline for patients who have been struggling with diabetes for a number of years, have uncontrolled sugar despite medication or lifestyle measures and whose organs have started exhibiting signs of early damage due to impact of the condition on the kidney and other organs. Early organ damage may get reversed after diabetes remission due to ileal interposition. We are happy that our capable team at FMRI has pioneered yet another surgical intervention.”