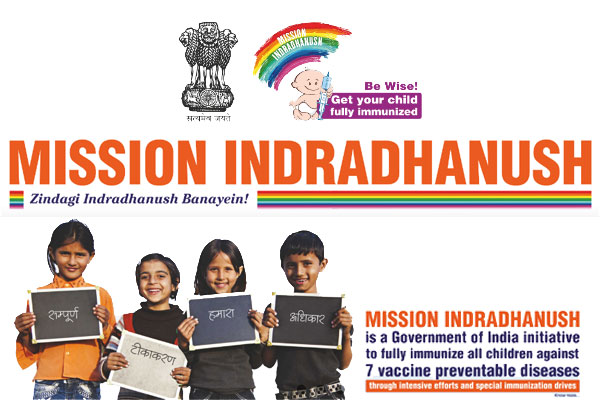 With an aim to accelerate the full immunisation coverage and provide greater focus on urban areas and other pockets of low immunisation coverage, the Ministry of Health and Family Welfare (MoH&FW) has drawn up an aggressive action plan to achieve the target by 2018. According to the plan, states will conduct Intensified Mission Indradhanush drives for seven working days from seventh day of every month starting from October 7, 2017 for four consecutive months excluding Sundays, holidays and Routine Immunization days. A total of 118 districts, 17 urban areas and 52 districts of North East states will be targeted under Intensified Mission Indradhanush.

Under Intensified Mission Indradhanush, greater focus will be given on urban areas which were one of the gaps of Mission Indradhanush. This will be done through mapping of all underserved population in urban areas and need-based deployment of ANMs for providing vaccination services in these areas. Mobility support to field staff for deployment to such areas in urban as well as rural areas will be provided.

A distinctive feature of Intensified Mission Indradhanush is that greater focus is being given on convergence with other ministries/ departments especially women and child development, panchayati raj, urban development, youth affairs, NCC etc. The convergence of ground level workers of various departments like ASHA, ANMs, Anganwadi workers, Zila preraks under NULM, self-help groups will be crucial for successful implementation of Intensified Mission Indradhanush.

Universal Immunization Programme (UIP) of India prevents mortality and morbidity in children and pregnant women against 12 vaccine preventable diseases. In the past it has been seen that the increase in immunisation coverage had slowed down and it increased at the rate of one per cent per year between 2009 and 2013. To accelerate this coverage Mission Indradhanush was envisaged and implemented since 2015 to rapidly increase the full immunization coverage to 90 per cent.

Make in India – Targeted Tonics will Make the Needle Move