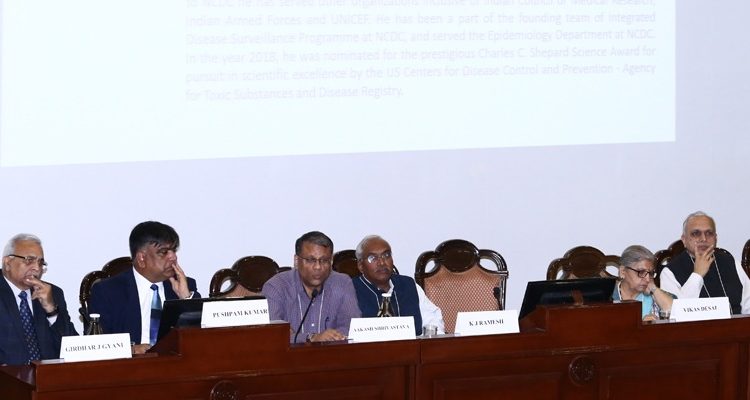 A platform where government, research institutions, academia, industry, community and international agencies intended to find solutions of the ill impacts of climate change on human health

The Centre for Environmental Health (CEH), a Centre of Excellence within the Public Health Foundation of India (PHFI) and Association of Healthcare Providers of India (AHPI) recently organised a conclave dedicated to the health impacts of climate change in India and appropriate risk mitigation and adaptation strategies, with specific focus on the health sector. Express Healthcare was a media partner for the event.

The conclave brought together a number of stakeholders including government, research institutions, academia, industry, community and international agencies on one platform to find a lasting solution of the ill impacts of climate change. A white paper is being developed which will be released soon. It aims to summarise the available evidence on interlinkages between climate change, air pollution, associated health impacts and the critical role of health sector as a contributor as well as a first responder to climate change. Potential mitigation and adaptation strategies applicable to Indian health sector were also discussed with implementable actions and policy focus in mind.

In a video message to the audience, Dr Soumya Swaminathan, Chief Scientist, WHO, said, “There is an increasing need to strengthen our health systems to be climate resilient and climate adaptable to mitigate the impacts of climate change. We have seen in India and other parts of the world the devastating impacts of climate change on people’s health, but also the damaging impacts of institutions which are providing healthcare like primary healthcare centres and hospitals. We need to design healthcare facilities to be climate adaptable, for instance, healthcentres being less dependent on fossil fuel dependent energy and adapting more renewable energy sources. Electricity and running water are absolutely essential in providing quality services to people accessing healthcare facilities. Other areas of focus is the use of plastics and cost-effective, environment-friendly and effective disposal of plastic in our health systems.”

She also suggested of making facilities in hospitals for providing better healthcare to be climate resilient.

Professor K Srinath Reddy, President, PHFI, said, “Climate Change has become defining threat of century and human civilisation as it advances. There is an increasing need to build climate-smart and climate-resilient health systems. The impacts of climate change are multiple in nature including the increase of the burden of water and vector-borne diseases, an array of chronic diseases which include cardiovascular, respiratory and kidney disorders, exacerbated impact of air pollution and heat stress on human health, along with the growing impact of climate change on mental health. It is well demonstrated that the rise in temperature increases the growth of inter-group and intra-group conflicts. These are some of the consequences the health system has to deal with.”

He further added, “Our nutrition and food systems are vulnerable to climate change, in terms of both reduced production and quality of staples, non-staples, fruit and vegetables. In spite of mounting evidence of the impact of climate change and health, there is a wavering political will in some countries and the voices of climate denial are growing shrill and strident. This needs to be countered by the health sector acting as the conscience keeper of society through evidence-based advocacy highlighting the mounting damage to health and wellbeing. Leadership in the health sector has an important role to play not only in public education, but also set an example as a role model for other sectors by mitigating climate change. There is a substantial contribution that the health sector can make by adopting green technologies to reduce various greenhouse gas emissions and decreasing energy consumption by adopting renewable energies. This can contribute to mitigation of climate change in a measurable way. Healthcare providers also have an opportunity to be effective communicators of good science on the potential health threats and health effects that have already been documented to policy makers, urging them to action. Health professionals will also have to act as trusted messengers to the community, providing general information on what they can do as individuals. This can also motivate the communities to powerfully articulate their demands for political action thereby enabling change. The health sector also has to develop climate-resilient health systems that can function efficiently even in the challenging circumstances of climate-induced extreme weather events and disasters like heavy rains floods and power failure.”

Dr Alex Thomas, President, AHPI, said, “ Charged with being first responders to climate change impacts, strengthening health infrastructure and preparing communities for the emerging health threats from expanding geographies of vector-borne diseases like dengue and malaria, threatened food and nutrition security, health hazards arising due to air pollution, extreme and unanticipated events such as floods, cyclones, heat waves, cold waves, salt water intrusion (due to rising sea levels) to mention a few; the informed healthcare provider groups can play a very critical role in the health system and greatly contribute to building up of climate resilient hospitals and communities.”

According to Gary Cohen, President and Co-Founder, Healthcare without Harm, “Climate change resulting from growing greenhouse gas (GHG) emissions from human activities (anthropogenic) are of increasing concern as this is a prime cause for global warming. If GHG emissions continue at current rates, rising temperatures can have potentially harmful effects on ecosystems, biodiversity and human health and livelihoods. In India, the major sources of anthropogenic carbon dioxide (major component of GHG) emissions come from combustion of fossil fuels, principally coal, oil and natural gas, apart from deforestation, changes in land use, soil erosion and agriculture (including livestock). Reducing our carbon emissions therefore becomes of prime importance.”