Private labs need to ramp up COVID-19 testing as utilisation at 30 per cent: NATHEALTH survey

Respondents to the survey highlighted that support is needed across Central, State Governments to ramp up testing

NATHEALTH recently conducted a survey among 50 private laboratories across 13 Indian states to explore ways to enhance testing in private sector labs. Findings indicate that with the current testing scenario, while the public sector is running at nearly full capacity, the private sector is being utilised only at 25-30 per cent.  The surveyed labs are currently working only single shifts, doing cumulative 5,000 tests per day with 17 labs doing less than 100 tests per day and six labs not doing any testing at all. A mere 30 per cent utilisation of private labs also indicate demand flow as a challenge to enhance testing. The current testing regime prioritises demand flow to public labs with only excess demand flowing to private labs.

Lab operators also mentioned significant on the ground operational issues. 56 per cent of the survey respondents face logistics challenges which can be solved by sample flow between districts and states to ensure better utilisation. 54 per cent face difficulties with guidelines and procedures that may be solved by standardisation of forms and simplified approval processes for sample collection. 24 per cent face pricing and commercial solution for which lies in expedited payments to tide over immediate liquidity challenges and consolidated procurement of consumables / kits.

The table below summarises state-level lab utilisation against current capacity for the surveyed 50 labs: 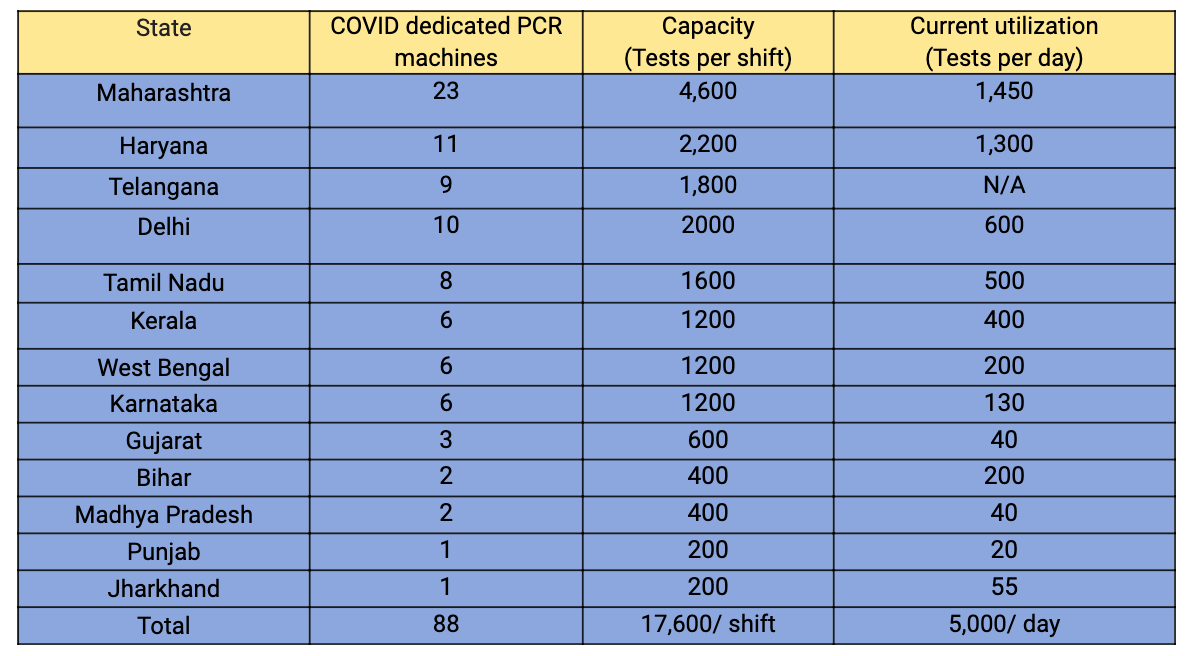 The respondents to the survey highlighted that support is needed across Central and State Governments to ramp up testing. There is a potential to increase the testing capacity by six times through better utilisation and two shift operations in private labs. Improving existing capacity utilisation to 80 per cent will increase testing to 14,000 tests per day assuming one shift operation. Additionally, increasing shifts to two will increase testing by 30,000 tests per day. We need to act now with cases expecting to peak further by mid-June 2020.