Nearly 4,000 Rotary members from 35 countries, government officials and topic experts explored ideas and solutions around disease prevention and treatment, water sanitation and hygiene, education and other topics relevant to India 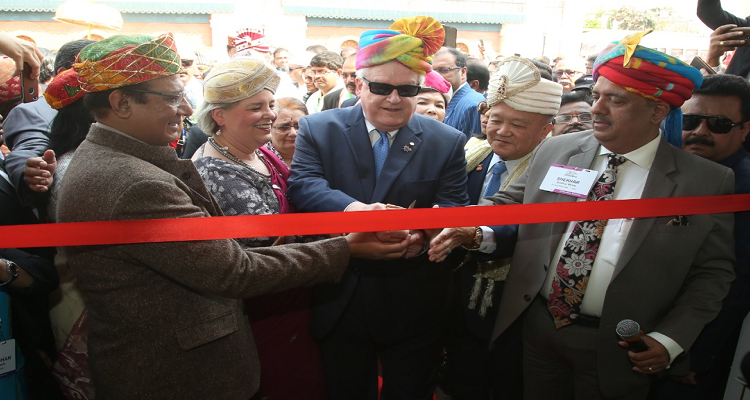 Nearly 4,000 Rotary members from 35 countries, government officials and topic experts explored ideas and solutions around disease prevention and treatment, water sanitation and hygiene, education and other topics relevant to India.

Rotary began its journey in India from the city of Kolkata, on 1st January, 1920 inspired by the organisation’s motto, “service above self”. In the last 100 years, Rotary has grown from one club to 4,000 with 1.5 lakh Rotary members in India.

In 2018-19, The Rotary Foundation in India supported projects worth $22.81 million, including: improving the education system; tackling significant public health problems throughout the country;

As a driving force behind global efforts to eradicate polio, Rotary will join India in celebrating its sixth polio-free year on 27th March, 2020. Since 1995, Rotary worked with the Indian government to institute National Immunisation Days each year to immunise 172 million children under five years of age.

Congratulating Rotary on achieving this 100-year milestone, Chief Guest Jagdeep Dhankar, Governor of Bengal, said, “The third decade of this century will be a decisive one for India, and organisations like Rotary, with its resources and commitment to creating positive and lasting change in the world, have an important role to play. Ending polio in India is a testament to Rotary’s dedication and action. We look forward to collaborating with Rotary to address India’s other challenges.”

As part of the celebration, Rotary honoured four individuals with its Rotary Hero Humanity Awards:

In his address to attendees, Maloney said, “As we celebrate our impact over the last 100 years in India, I’m inspired by these creative solutions to some of our toughest challenges, from economic inequality to conflict resolution to fighting disease. India is one of the Rotary’s fastest-growing countries with a 56 per cent increase in membership over the last decade, so there is unlimited potential.”

Referring to the Union government’s Ayushman Bharat scheme, Dr Harsh Vardhan called it an “ambitious programme, under which 1.5 lakh health and wellness centres will be set up across India by the end of 2022. So far, 30,000 are being set up and by March-end, we will have around 40,000 centres.”

He added, “I sincerely appreciate the work done by Rotarians across the world in the last 115 years and in the last 100 years in India. Rotary is the only organisation that dreamt about a polio-free nation much before any other organisation did. Partnership with Rotary International could be a gamechanger in reaching every child under Intensified Mission Indradhanush and elimination of TB.”

In his closing remarks, Naidu complemented Rotary for the work done in India for eradicating polio in partnership with the Government of India, WHO, United Nations International Children’s Emergency Fund (UNICEF) and Bill and Melinda Gates Foundation (BMGF) and other areas like literacy and water conservation.

Mehta said, “For an organisation with the motto “service above self”, the best way to celebrate our 100-year milestone is to enhance our humanitarian activities, and this is what Indian Rotarians are doing. They have raised the bar so high that I am compelled to say that every Rotary member truly is the Koh-i-Noor in the Rotary world.”