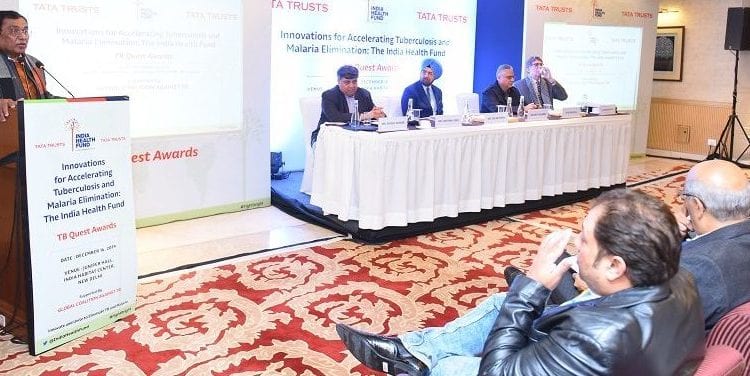 IHF is an initiative seeded by Tata Trusts that endeavours to strengthen India’s ability to fight, eliminate public health challenges of tuberculosis and malaria

The TB Quest Awards were given at a function hosted by the India Health Fund and supported by the Global Coalition against TB in the Capital recently. The five awardees were Guests of Honour on this occasion were Dr Kirit Solanki, Member of Parliament, Dalbir Singh, President Global Coalition Against TB, Dr Henk Bekedam, Representative to India, World Health Organisation, and Dr KS Sachdeva, Deputy Director General, Revised National Tuberculosis Control Programme (RNTCP) Government of India.

India Health Fund (IHF) is an initiative seeded by the Tata Trusts and endeavours to strengthen India’s ability to fight and eliminate the public health challenges of tuberculosis and malaria. It has been created as a platform to aggregate risk capital from multiple sources in private and public sectors and allocates capital efficiently to the most promising and relevant innovations. India Health Fund supports innovators to accelerate their “lab to market” journey, most importantly the validation and adoption by the health systems.

IHF believes in bridging the gap between the public as well as the private sphere of innovation and technology. With this aim in view, IHF initiated the Quest for Innovations towards Eliminating Tuberculosis (TB Quest) Awards that acknowledge and foreground entrepreneurs and innovators working consistently to scale-up innovative platforms or practices that are focussed on crucial areas that require attention. These include bringing ‘missing’ TB patients within the purview of care; screening and appropriate management for latent TB infection (LTBI) among all identified high-risk population groups in India; infection control in settings such as healthcare facilities, crowded habitations where transmission is high and helping to bridge gaps in the supply chain of anti-TB drugs and consumables in the public and private sectors.

TB Quest would not only help to transform the key aspects of a TB Care Ecosystem but greatly contribute towards the government’s initiatives in the fight against TB by providing them with the prerequisite science and technology innovations to do the same efficiently.

Dr Solanki, said,“The TB medication regimen must be taken regularly and that registration of patients should be compulsory both in government and the private sector centres so the treatment regimen can be adhered to. Lack of awareness is a major problem; as is inadequate nutrition. These need to be taken care of.”

The awardees and their path-breaking initiatives:

CisGEN Biotech Discoveries has focussed on the problem of transmission of TB from animals to humans by creating an innovative technological kit that combines native and recombinant antigens to detect bovine TB. It also helps to distinguish between Mycobacterium tuberculosis infection and environmental mycobacteria infection. The animal TB kit test can be performed in any field without any expertise with minimal risk. However, the final evaluation of the kits will be performed at dairy farms and veterinary centres.

Qure.ai Technologies has investigated the problem of the false and slow diagnosis of the disease, especially in remote areas. The company has curated Qure.ai, an AI (artificial intelligence) start-up that applies AI and deep learning technology to radiology imaging for quick and accurate diagnosis of tuberculosis. Qure.ai’s AI-driven solution is being evaluated across the globe through various foundations such as Bill and Melinda Gates Foundation, International Organisation for Migration, etc. Their goal is to generate 100,000 analog-to-digital datasets which will ease the detection of tuberculosis and ensure early treatment.

Valetude Primus Healthcare has invented a device that has made the collection of sputum faster and more efficient. The immune-magnetic cell capture technology (iMC2) can be used at the community level to replace sputum smear microscopy for diagnosing tuberculosis.

Centre for health research and innovation works at creating an ecosystem that leads to faster diagnosis and treatment for TB patients. The Truelab TM Real Time quantitative micro-PCR system provides a real-time, battery-operated, point-of-care PCR testing and molecular diagnosis to patients. This helps in rapid diagnosis and focussed treatment and leads to better disease control.

Sensedose Technologies has developed the TMEAD — Tuberculosis Monitoring Encouragement Adherence Drive. It provides alarm based and digital notification-based reminders to patients and all prescribed medicines are pre-sorted and pre-filled. This will help in better adherence to Revised National Tuberculosis Control Progamme (RNTCP).

“The challenge ahead is to look at how to eliminate TB in a short time. We have introduced many new approaches such as ‘treatment as prevention’ and early case detection. Now we need to look at how to better diagnostics and other processes,” stated Dr Sachdeva.

Singh said, “TB is the gravest public health challenge we face today, and it affects a country’s economy and productivity. Our coalition is at the forefront of political advocacy in India, and now we all need to come together, continue the strategic vision, step up R&D and innovate.”

Recent advances in the management of Parkinson’s disease