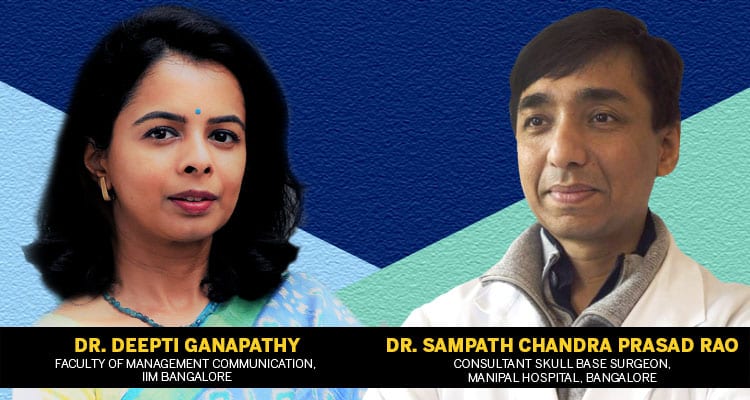 Dr Deepti Ganapathy, faculty, management communication, IIM Bangalore and Dr Sampath Chandra Prasad Rao, consultant, skull base surgeon, Manipal Hospital, Bangalore emphasise that there can be many sources of contamination in an already-stressed system. This is where communicating proper protocols and ensuring these directives are understood and disseminated effectively will clearly show measurable outcomes

The epidemic within the pandemic, black fungus or mucormycosis has intensified our already stressed health and government machinery. The unique nature of the spread of this outbreak along with the past 50-year case history of fungal infection outbreaks, led one of us (Dr Rao) to look more closely and postulate a hypothesis which was presented to the head of the COVID task force of the Karnataka Government. Though the Union health ministry urged states and Union Territories to declare this as a notified disease under the Epidemic Diseases Act 1897, the findings from our (Dr Rao’s) research led him to convince the state government to immediately ensure that special directives were communicated to every hospital in the state. 24 hours after this revelation, the state government issued protocols to hospitals and begun the task of communicating advisories to the public and communities at large.

During an outbreak of such magnitude, health communication becomes critical to not only disseminate crucial information but to help the various stakeholders involved understand the change in behaviour they must adapt to contain the spread of disease.

There are multi-pronged factors involved in the current mucormycosis outbreak.

India is the diabetes capital of the world and has a young demographic afflicted with this lifestyle-related disease. The black fungal outbreak makes this group highly susceptible. The health care system allows general public to purchase steroids over-the-counter which is leading to steroid abuse. In the west, a fungal outbreak does not exist in the context of community acquired. The population density and unhygienic living conditions in India coupled with the climatic conditions make the indoors prone to fungal growth on walls and in air-conditioning vents and ducts. The use of masks is not followed by the public in a precise manner. Re-using masks and keeping masks on for long hours while speaking and breathing leads to an accumulation of moisture in the nasal area. Doctors are seeing an increase in young patients in their early 20s and 30s- coming in rather late with infection having reached their brain which can be fatal. Black fungus treatment is expensive, often involving surgery which can disfigure and scar the patient- physically and emotionally.

The symptoms of mucormycosis is very similar to that of COVID leading to patients not coming in sooner. Every hour is critical and patients must report these symptoms immediately and not resort to steam inhalation, consumption of steroids and avoid going to the hospital in such a scenario. The medical fraternity is seeing a spectrum of patients even as the pandemic unfolds and keeps moving from 2020 to 2021. It is also critical to main a central database on mucormycosis that can be updated in real-time. When we compare best practices in the West and look at their protocols, often an incidence of fungal infection seen in 1-2 patients leads the investigators to identify an in-house outbreak and identify potential areas of contamination. It is sheer negligence and not good governance practice to let the number of cases reach a peak of 10,000 cases before declaring it as a notifiable disease.

There can be many sources of contamination in an already-stressed system and this is where communicating proper protocols and ensuring these directives are understood and disseminated effectively will clearly show measurable outcomes. The source could be community acquired, but with a lockdown in place for many weeks, we must investigate if the concentration of spores of the fungus exists within hospitals. The government has also ensured that oxygen concentrators which were earlier medical instruments kept in a hospital can now be used at home. Are they being sterilised? Is distilled water being used? In allowing industrial oxygen to be supplied and nitrogen plants to be converted to oxygen producing plants- are we ensuring weekly microbiological sampling at various points in the supply chain? A high-powered committee ought to investigate this hypothesis of contamination of hospitals with mucor due to the diversion of industrial units to produce medical grade oxygen.