Venture funding in digital health up 66% in 2020: Mercom Capital 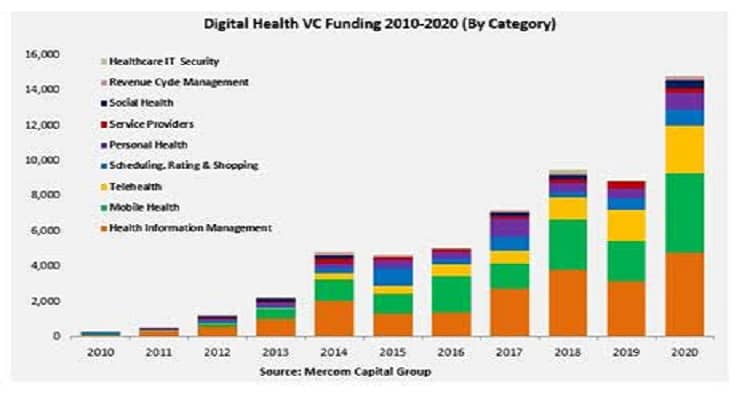 Record $14.8 billion raised in 2020, telemedicine shatters funding records with $4.3 billion in 2020
Global venture capital (VC) funding in digital health, including private equity and corporate venture capital, came to $14.8 billion in 637 deals, a 66 per cent increase compared to $8.9 billion in 615 deals in 2019, according to Mercom Capital’s annual report on funding and mergers and acquisitions (M&A) activity for the sector for 2020.

Seventy-seven percent of the sector’s funding went to US companies in 2020, with $11.5 billion in 429 deals compared to $5.9 billion in 426 deals in 2019, a 95 per cent increase in year-over-year (YoY) funding. Chinese companies recorded $1.1 billion in eight deals. Thirty-eight countries recorded digital health VC funding activity in 2020.

Since 2010, digital health companies have received $59 billion in VC funding in over 5,000 deals and almost $21 billion in debt and public market financing (including IPOs), bringing cumulative investments into the sector to approximately $80 billion. In 2020, there were 38 large funding deals of $100 million or more, accounting for 40 per cent of the total funding.

“COVID-19 supercharged funding activity in digital health in 2020. Ten digital health categories had their best year with record funding amounts. It was also the biggest year for IPOs with six digital health companies raising over $6 billion. We could see a lot more companies going public in 2021 if the current IPO and SPAC boom continues,” commented Raj Prabhu, CEO, Mercom Capital Group. “The pandemic has mainstreamed the consumer side of digital health technologies in less than a year. Digital health products that were a novelty a year or two ago are now a necessity.”

In 2020, telemedicine was the top-funded category and led VC funding activity with $4.3 billion, a 139 per cent YoY increase compared to $1.8 billion in 2019. Other top-funded categories in 2020 included: Data Analytics with $1.8 billion, mHealth Apps with $1.4 billion, Clinical Decision Support with $1.2 billion, Practice Management Solutions with $837 million, Wearable Sensors with $815 million, Wellness with $792 million, Healthcare Booking with $765 million, and Social Health Networks with $500 million.