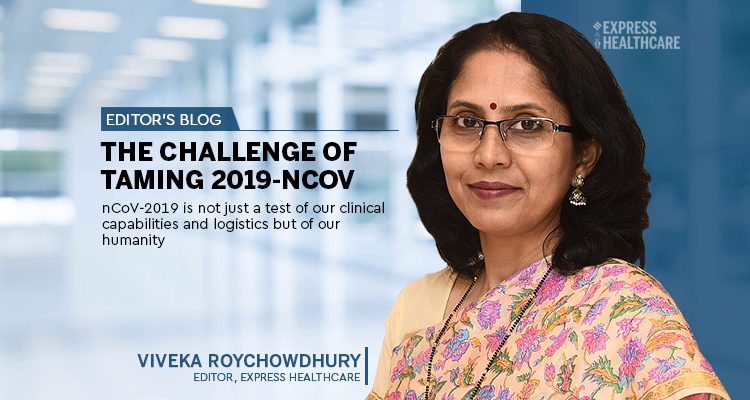 On January 31, the WHO finally declared that the outbreak of novel coronavirus (2019-nCoV) which originated in Wuhan city, China constitutes a Public Health Emergency of International Concern (PHEIC). The WHO is being criticised for delaying this announcement as it is almost a month and a half after news of the first patient. All signs are that the virus is highly transmissible, even before the first symptoms are visible in the incubation period of 14 days. This silent spread could even result in a potential pandemic.

As per the January 31 WHO release, 2019-nCoV has already claimed 170 lives in China. Of the 82 cases in 18 countries, only seven had no history of travel in China. There has been human-to-human transmission in three countries outside China, one of these cases is severe. On January 30, a student from Kerala studying at China’s Wuhan University became India’s first positive case of the 2019-nCoV.

As with the Nipah virus, and before that, SARS and MERS, 2019-nCoV is a zoonotic virus, capable of jumping animal species before infecting humans. The virus is the latest test of healthcare systems across the world. As Dr Tedros Adhanom Ghebreyesus, Director-General, WHO said in the January 31 press conference to announce the PHEIC decision, “Our greatest concern is the potential for the virus to spread to countries with weaker health systems, and which are ill-prepared to deal with it….We don’t know what sort of damage this #2019nCoV virus could do if it were to spread in a country with a weaker health system. We must act now to help countries prepare for that possibility.”

The WHO protocols and technical guidance documents for containment, including active surveillance, early detection, isolation and case management, contact tracing and prevention of onward spread of 2019-nCoV infection, have been updated on the WHO website. In India, observers are hopeful that our hospitals, both public and private, will gear up and do a fair job of containing the virus. In 2018, the Nipah virus outbreak was localised to two districts in Kerala: Kozhikode and Malappuram, thanks to alert hospital staff, rigorous quarantine measures and tracing of contacts. Nipah like protocols are reportedly being followed for 2019-nCoV as well.

India’s first positive 2019-nCoV case, a medical student from Kerala studying at China’s Wuhan University, is currently in the isolation ward of a hospital in Kozhikode and according to an update from the Ministry of Health & Family Welfare (MoH&FW), is ‘stable and is being closely monitored.’

Kerala reportedly has 806 people under observation, with 10 in isolation wards in hospitals, and the rest in-home quarantine. At least 10 persons are quarantined in three hospitals across Maharashtra for possible exposure to 2019-nCoV as well. The MoH&FW has also issued a list of frequently asked questions as well as a travel advisory to cancel all travel to China. Besides the Ministry of Health & Family Welfare, other ministries like External Affairs, Defence, Home Affairs, Civil Aviation, Information & Broadcasting, Labour & Employment, and Shipping are coordinating to tackle this latest health crisis.

The larger question is, with no sure cure, treatment protocols are evolving by the day. The WHO has released a protocol designed to investigate the First Few X cases (FFX) and their close contacts. One hopes that personnel in India are following this standardised protocol so that epidemiological exposure data and biological samples can be systematically collected and shared rapidly. This objective is that the information from the FFX 2019-nCoV investigation can be analysed across many different settings globally for timely estimates of 2019-nCoV infection severity and transmissibility, as well as to inform public health responses and policy decisions.

The Coalition for Epidemic Preparedness Innovations, a ‘public-private coalition that aims to derail epidemics by speeding up the development of vaccines’ has announced funding for three programmes to develop vaccines against nCoV-2019, but it is still very early days yet. Reports have also come in that a combination of anti-HIV medications, two anti-retroviral medications – lopinavir and ritonavir – could be effective against the coronavirus as well.

While the race to find a cure continues, we should also analyse how we can prevent such zoonotic diseases in the first place. Better sanitation, especially at the so-called wet markets is a given but less obvious measures like improving overall basic hygiene should also be a non-negotiable. The Swachh Bharat campaign should be pursued with renewed vigour, not just around inspection and competition but as a habit.

There are already worrying reports of the strain on health systems in India. For example, a patient who returned from China and was screened at Mumbai’s Kasturba Hospital commented that the ‘municipal hospital had poor prevention control mechanism’. According to media reports, the hospital’s isolation unit maintains no separate air conditioning, no negative pressure in the ward to prevent cross-infection and has only windows for ventilation.
The government will have to turn to private hospitals to allot rooms for quarantined patients to supplement those in public hospitals. But given that the beds will be occupied for a longish period of time, will corporate hospitals agree? The quarantine will also impact normal hospital operations and might also keep away paying patients who might fear the disease and also stigmatise quarantined patients and their caregivers.

Making the right COVID choices in 2021