How open is the Indian healthcare system on rapid diagnostic tests for infectious diseases? 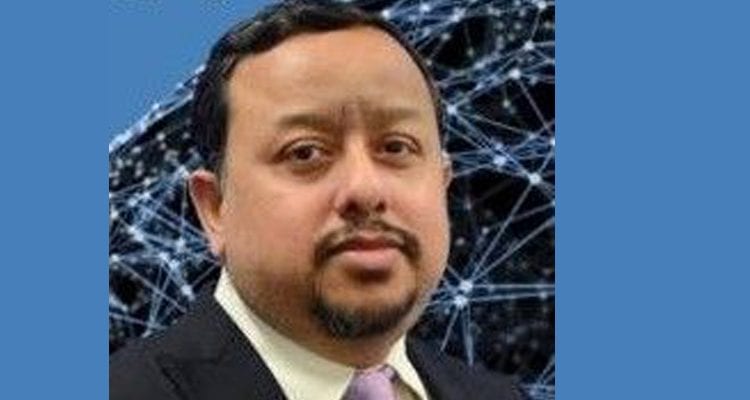 Silver linings, confusions, doubts and a thin line between intent and adoption in 2020

At a time when the whole world is worried about coronavirus, the Indian healthcare system seems to be confident that they can control infectious disease caused by such organisms. I am assuming that the reports of preparedness are true but what about the cases of dengue, malaria, influenza? Do we really follow CDC or NCDC?

Growing up in a tropical country and studying medical microbiology, I always realised that point of care testing or bedside diagnostic testing will always play a major role in saving the lives of millions of patients. At that point (2000), there were no diagnostic kits for infectious diseases, except for ELISA and few tests which could give results in 24-48 hours. Against reports of negativity and grey thought leadership, I am making an effort to showcase a near true picture of rapid diagnostic test adoption and practice trend in India. There are many infectious diseases which need a rapid diagnosis, however, in this article, we are covering two of the most pressing ones.

Earlier there were two types of malaria detection kits that were available in the market. The first type could detect malaria antigen in the blood of the suspected patient while the second one could detect malarial antibodies. The later was banned since March 23, 2018, as there were many reports of false positives. Hence, that leaves us with only one type of detection kit in 2020 and we are hopeful that new types will be available someday.

As per one of the major reports released by World Health Organization (WHO) in 2016, India then accounted for 6 per cent of global malaria cases and 7 per cent of death and it was unlikely that this could be reduced to half or even 40 per cent by 2020. However, with the efforts of ICMR and Government of India, the numbers came down in 2019. According to the World Malaria Report released in December 2019, India was reported to be one of the only two nations that could achieve reduction in cases of malaria out of the 11 nations that carried the maximum burden of malaria across the world (India registered a 28 per cent fall of cases in between 2017 and 2018). Only seven out of 28 Indian states and nine UTs (now 11) accounted for 90 per cent of the estimated malaria cases in 2018. These states were West Bengal, Jharkhand, Chhattisgarh, Odisha, Madhya Pradesh, Uttar Pradesh and Gujarat.

So is the picture better in 2020? The thin line between good intent and adoption of best practices remains a blur. We still have high cases of undetected malaria, affordability and availability of tests in remote locations are still questionable. Even the physicians are not sure about the outcome of detection kits. In a 2019 study published in 3Biotech (Jan, 2019 ed) microscopy and the malaria antigen-based, lateral flow assay exhibited similar sensitivity, specificity, PPV, NPV and efficiency, respectively, whereas the PCR assay had 100 per cent sensitivity, specificity, PPV, NPV and efficiency. The study included 1403 samples collected from the patients, of which 1227 were clinically suspected cases and 176 from consecutive feverish patients. Hence the picture is still not clear and debatable. The opinion of physicians varies from one state to another.

The research and funding agencies of India comes up with some breaking news every now and then. It is not clear nor quantifiable if these newsmakers could actually commercialise their products and would sell their kits in the Indian market. Funds are available but something is missing. Some examples are: 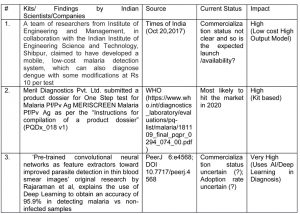 World Malaria Day is approaching on April 25, the burden of malaria cases is going down. However, due to the size of the undetected /suspected population, eradicating malaria on the ground would be mammoth task both for the Health Department as well as for NGOs and private players. Previous pilot studies by pharmaceutical company (Sun Pharma signed a pilot study between Indian Council of Medical Research, Government of Madhya Pradesh and Foundation for Disease Elimination and Control of India (FDEC- India) to launch the malaria-free India demonstration project in Mandla district of Madhya Pradesh in 2016), never got replicated in any other part of India. India ranked fourth in the number of malaria cases in the world as per the last Lancet Commission report released on the eve of September 8, 2019. We haven’t lost hope, have we?

2019-nCoV has killed more than 200 people and infected more than 9,000 since it was first identified in Wuhan, China, in December 2019. So how do you differentiate between corona and influenza virus? Every time I have visited a clinic or hospital I don’t really remember if my GP or specialist have ever recommended an RIDT?

Biomerieux’s Vikia & Bionexia are available in India and can offer a test result in 3 -30 minutes. Besides them, Altona diagnostics, Abbott, QuickVue (Quidel) and more have products in this segment. I am not promoting any brand or company here, my point is how many times does the physician use an RIDT to assess whether you have influenza or not (leave behind the type A or B)? The protocols are very much in place, so where are we going wrong?

Based on recommendations from the CDC, nations such as Zambia and Nigeria have adopted RDT in their healthcare protocol. Even our own National Centre for Disease Control (NCDC) favours Rapid Immunochromatographic Diagnostic Tests (RIDT), rapid influenza diagnostic tests.

Indian healthcare system and the people who are driving this have to open up and look beyond conventional diagnostics. It’s not that these kits don’t have many takers in the market, however considering the number of suspected cases each year, only a few get documented here and there. There is no national registry and no uniform treatment or diagnosis protocol. The intent among practitioners is very much there. So what is stopping them from using RDT as a daily practice? If a patient can pay Rs 1000 for a specialist (50-55 per cent of Indian pay out of pocket (unconfirmed), can this be adjusted or added? Will that pinch too much? At least the physicians can suggest the option of whether to take RDT or not and leave it to the patient to decide further.

As an Indian, I would love to see this line blur between intent and adoption of rapid tests. I see a silver lining somewhere, do you?