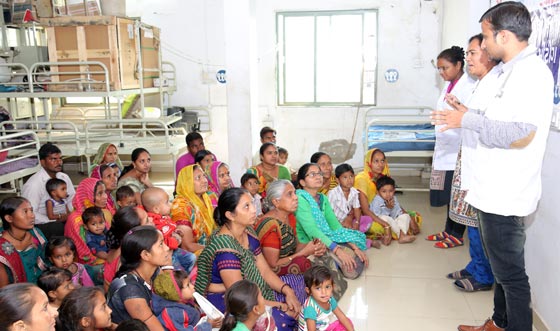 While India’s progress on the economic front has been impressive, the nation still fares poorly on nutrition metrics. Over half a million children in India do not make it to the age of five due to severe acute malnutrition. Almost 38 per cent of children under the age of five, in India, are afflicted by stunting.

Tata Motors is addressing this problem under its health programme ‘Aarogya’ and has set up malnutrition treatment centres in Jamshedpur where severely malnourished infants and children who are between 0-6 years of age are medically treated so that they achieve normal health as per World Health Organisation (WHO) protocols.

Tata Motors ‘Aarogya’ focusses on maternal and child health, with a holistic and balanced approach towards preventive healthcare and curative healthcare interventions. The Company has tied up with nutrition rehabilitation centres across India to raise awareness on the health of children, pregnant women and lactating mothers.

The firm has been providing nutritious breakfast, holding sessions for pregnant and lactating women and organising awareness drives to reduce the rate of malnutrition. The entire programme not only takes care of the children until there is an improvement in their health but also ensures that prerequisite care is taken thereafter too. Local anganwadis help provide milk and multi-vitamins to these children.

Tata Motors even pioneered institutionalising the public private partnership (PPP) model for malnutrition treatment centres (MTC). By seeing the success of this model, the state government replicated the model across Jharkhand (at 87 centres) and other states in FY 17-18. The initiative was even recognised by United Nations International Children’s Emergency Fund (UNICEF).

Sanvi Sakpal (one-year-old baby) is a patient suffering from a medical condition ‘Thalassemia Major’ as a result of which she requires monthly blood transfusion. A resident of Mahabaleshwar, she came to Lokmanya Tilak Municipal General Hospital (LTMGH) in Dharavi, Mumbai for the treatment of Thalassemia and was referred to Nutritional Rehabilitation, Research and Training Centre (NRRTC) since she was also malnourished. With the anthropometry of weight 4.84 kg, length 62 cm, mid-upper arm circumference (MUAC) 10 cm, she was falling in the category of severe acute malnutrition. After 3 months of medical nutrition therapy (MNT) treatment supported by Tata Motors under its CSR pogramme ‘Aarogya’, Sanvi now weighs 6.71 kg, length 67 cm, MUAC 12.8 cm and is now recovered from severe acute malnutrition state to a normal state.

When asked about the treatment, her mother said, “I am very happy to see my child gaining weight and coming out of malnutrition. Earlier it was challenging for us to help her gain weight but now the MNT provided and the treatment provided at NRRTC has helped my child to a great extent”

In FY 2018-19, Tata Motors successfully touched close to three lakh lives in India through its health programme ‘Aarogya’. Community development and meaningful social engagement has been at the heart of the corporate social responsibility efforts at Tata Motors. Inclusive development is ensured through these affirmative action programmes for communities around the plant at large.