Addressing Cancer Summit 2020, Minister of State for Health and Family Welfare Ashwini Kumar Choubey said that people should not be scared of the disease and rather should come out in the open as there are many policies in place to take care of their every need 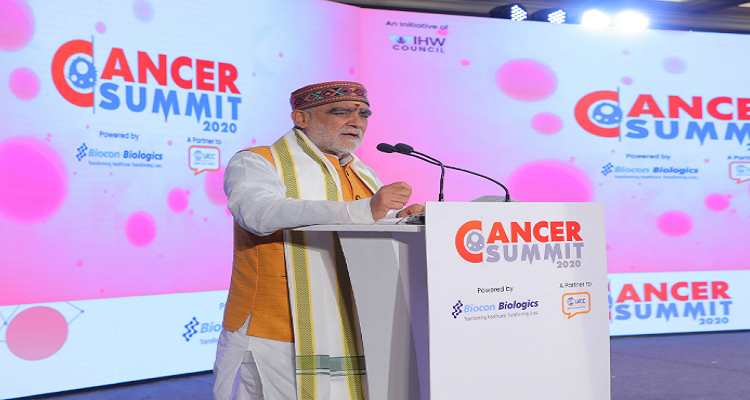 In a major gathering of health professionals on the World Cancer Day, Minister of State for Health and Family Welfare Ashwini Kumar Choubey announced that the Narendra Modi-led government has taken up the mission of curbing the dreaded disease from the roots on priority. He also stated that the government has introduced many schemes and policies for cancer patients as it has been observed that 50 per cent of deaths happen due to lack of treatment.

Choubey, who was addressing Cancer Summit 2020, said that people should not be scared of the disease and rather should come out in the open as there are many policies in place to take care of their every need.

“I am very happy and thankful to the IHW Council that they have taken up the initiative to make people aware about the disease that can take life if not checked on time. The government-funded schemes for cancer patients include Rashtriya Arogya Nidhi under the Ministry of Health & Family Welfare (MoHF&W) that gives financial assistance as one-time grant up to Rs 1, 00,000 for BPL patients for treatment at super specialty hospitals/institutes or other government hospitals. Another scheme under the MoHF&W is State Illness Assistance Fund (SIAF) in which, BPL patients get treatment for cancer or other life-threatening illnesses if they undergo treatment at the government hospitals for costs upto Rs 1,50,000. We also need to establish cancer tissue banks to make treatment accessible to more people,” he said.

Hailing the government’s move to set up Jan Aushadhi stores and regulate drug prices through National Pharmaceutical Pricing Authority (NPPA), Dr P D Vaghela, Secretary, Department of Pharmaceuticals, Ministry of Chemicals & Fertilizers, said it has made cancer drugs affordable to a large section of the affected people and may play an important role in addressing the cancer treatment needs of the Indian middle-class.

“Health expenditure in India is Rs 2,500 per capita, 50 per cent of which is spent for medicine. Health expenditure is one of the biggest causes of pushing families below poverty line and the middle-class is particularly vulnerable. Therefore, we need to encourage the use of generic drugs. The Jan Aushadhi stores supplies 6,000 types of generic drugs, including 38 types of anti-cancer drugs and at a price that is 50 to 80 per cent less than the market rate. However, it is only multispeciality hospitals where cancer treatments are carried out. We request such hospitals to open Jan Aushadhi stores at their facilities and urge the practitioners to prescribe generic drugs so that the middle class does not suffer due to cancer treatment expenditure. Generic medicines are as good as branded medicines; in fact, the sample success of generic medicines is higher than the branded ones,” said Dr Vaghela at the first Cancer Summit organised by the Integrated Health & Wellbeing (IHW) Council.

Dispelling the idea that NPPA is a price control mechanism, Dr Vaghela also said, “We do not want to control the price but we need to regulate profiteering. Through trade margin rationalisation approach, we have made 42 cancer drugs more affordable to patients – cancer drugs that were earlier sold for Rs 10,000 and Rs 25,400 are now available for Rs 892 and Rs 2,510, respectively. It has benefitted 1,000 crore cancer patients in India.”

“We want to fight the emperor of all maladies as we can today detect far more cases than before. Also, people these days are aware of the cancer-causing physical and environmental factors they need to be cognizant of. I am a cancer survivor myself as I was diagnosed with the disease eight years ago and was fortunate to have the support of loved ones as well as good healthcare. The disproportionate strain on family savings when cancer strikes and the dread of cost management is real as although we have many toolkits to diagnose cancer, we are yet to make a significant advance. Women are more prone to cancer as the camps to diagnose breast and cervical cancer are just not available. However, we cannot defeat it alone as we need strong alliance and we can see that Biocon’s commitment for affordable cancer care resonates with WHO and the Government of India. Every opportunity to look for precancerous lesions should not be missed if you are going for a regular check-up or the gynaecologist’s office as only then can we truly beat it,” said Dr Christiane Hamacher, CEO, Biocon Biologics.

According to the World Health Organization (WHO), one-third of deaths from cancer occur due to five leading behavioural and dietary risks. These are high body mass index (BMI), low fruit and vegetable intake, lack of physical activity, tobacco use and alcohol use.

“Cancer is a huge concern and a timely one as over 1,300 people die of cancer every year. This causes massive distress on the economy as people who are still in their working years are unable to contribute positively. Today, most cancer deaths are not only caused by tobacco consumption and HPV, but are a result of poor environmental and dietary choices. The government has helped people with cancer with Ayushman Bharat and other initiatives. In the recently concluded budget, the FM announced the initiative for TB-free India with ‘TB Harega Desh Jeetega’ message and I hope in the next budget, we have made enough progress to say ‘Cancer Harega, Desh Jeetega’,” said Kamal Narayan, CEO, Integrated Health & Wellbeing (IHW) Council.

The other sessions at the event included panel discussions on government’s perspective on addressing cancer, upgrading the healthcare ecosystem for early diagnosis and initiation of clinical care, accessing state-of-the-art therapeutics at affordable prices and leadership for an effective cancer response.

Breast cancer most common type of cancer in females and GI tract cancer common in males in Mumbai: Metropolis Healthcare