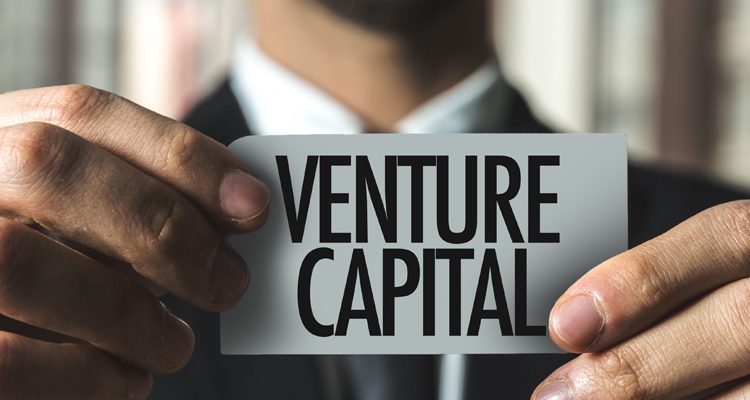 Mercom Capital Group, a global communications and research firm, released its report on funding and mergers and acquisitions (M&A) activity for the digital health (Healthcare Information Technology) sector for the second quarter (Q2) and first half (1H) of 2019. Mercom’s comprehensive report covers deals of all sizes from across the globe.

“Funding activity was robust in digital health in the first half of 2019, while M&A activity was weak. Weak M&A activity has not affected investment activity over past years. We are in an ‘invest first and ask questions later’ environment where investors are more worried about missing out in this hot space. After a long hiatus, we are seeing several digital health companies entering the IPO market in the US. Successful IPOs could open the floodgates, whereas if IPOs fizzle out, it could shut the IPO exit path for many Digital Health companies,” said Raj Prabhu, CEO, Mercom Capital Group.

The top funded categories in 1H 2019 were: analytics with $1.1 billion, telemedicine with $896 million, mHealth Apps with $627 million, wellness with $341 million, healthcare booking with $336 million, clinical decision support with $287, wearable sensors with $285 million, mobile wireless with $264 million, and healthcare benefits with $208 million.

The top funded categories in Q2 2019 were: telemedicine companies with $676 million, analytics with $551 million, wellness with $304 million, mHealth Apps with $236 million, wearable sensors with $226 million, healthcare benefits with $208 million, clinical decision support with $180 million, mobile wireless with $174 million, and healthcare booking with $159 million. 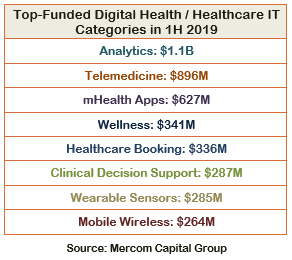 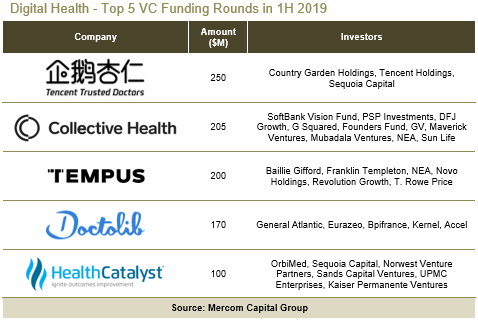 mHealth App companies were involved in the most M&A deals in 1H 2019 with 15 transactions, followed by Practice Management Solutions with nine, analytics with eight deals, telemedicine with seven deals, and clinical decision support companies with five deals.