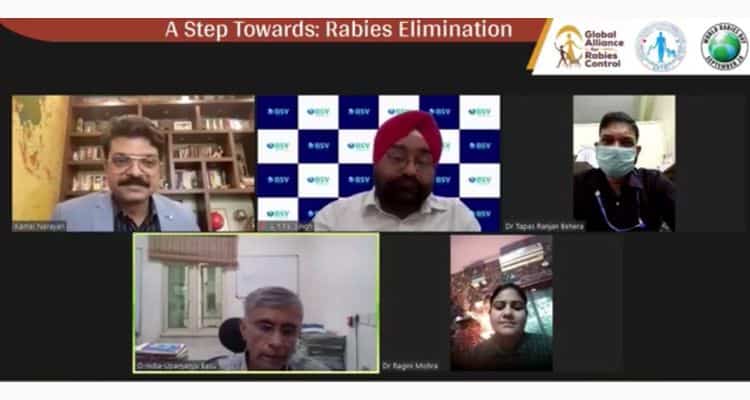 Public health experts and anti-rabies activists, who congregated at the 2nd edition of Rabies Awareness Summit by Integrated Health and Wellbeing Council, have welcomed the launch of National Action Plan for Rabies Elimination (NAPRE) by 2030 which was launched by Union Minister for Health and Family Welfare, Mansukh Mandaviya and Union Minister for Animal Husbandry, Fisheries and Dairying, Parshottam Khodabhai Rupala on the occasion of World Rabies Day.

Dr D. H. Ashwath Narayana, President, Association for Prevention & Control of Rabies in India said, “We welcome that the government has finally launched the National Action Plan for Rabies elimination. The eradication of this 100% vaccine preventable disease that kills a large number of people in India must be taken on the mission mode and we shall try to achieve this target much before the 2030 deadline set by the WHO.”

Dr Narayana also highlighted that there is an urgent need for the government to undertake an immediate survey to find out the actual burden of deaths due to human rabies. The burden estimates that are presently known accounts for nearly 40% of global burden that was found in a study conducted nearly 16 years ago. He also hoped that the death burden due to rabies would have come down substantially over the years.

“However, we must ensure that even one death shall not occur due to a completely preventable cause,” he added.

Noting that controlling rabies at animal level is important, Upamanyu Basu, Joint Secretary (LH), Department of Animal Husbandry & Dairying, Ministry of Fisheries, Animal Husbandry and Dairying, Government of India, said that the government has taken up the task of eradicating the preventable disease on a mission mode.

He said that the cost of vaccines and shortage of manpower to implement vaccination programs are major challenges at hand.

“The Government of India has taken up the national action plan to eradicate rabies on a mission mode. We are focusing on vaccination; mindset change and treatment following the one health approach. We are supporting the states under the Assistance to States for Control of Animal Diseases (ASCAD)program for vaccination of animals including dogs and livestock but we are facing challenges in terms of the high cost of vaccine and lack of enough manpower to implement vaccination—though we are training people to become community volunteers at village level, we need more volunteers in states,” said Basu.

Ajit Pal Singh, President-Critical Care and Emergency Medicines, Bharat Serums & Vaccines Limited said, “There are three Areas where we would like to work with the government:  creating awareness in people, focusing on importance of treatment, and compliance to treatment by patients. About 15000 doctors are being trained by us but standardization of the bite category is important as we have found that many young doctors are not equipped for comprehensive bite management.”

Speaking about the situation in Andhra Pradesh, Dr Geetha Prasadini, Director, Public Health & Family Welfare, Government of Andhra Pradesh said, “A lot of change has happened since 2018 and the Government of India is trying its best to eliminate rabies. The availability of antiretroviral drugs (ARVs)and anti-rabies serum (ARS)have improved and the Andhra Pradesh government is seriously pursuing the availability of vaccines in community health centres (CHCs). It is important to have interdepartmental and inter-ministerial coordination and supportive mechanisms to eradicate rabies. We also need support from municipalities and other departments. The main challenge of rabies control is often lack of awareness – we have seen lapse in administering the post prophylactic medicine due to lack of awareness in patients who do not come for subsequent doses after initial treatment.”

“Rabies is a fatal but preventable viral disease that kills thousands of people in India every year. It is endemic in India that accounts for 36 per cent of the world’s deaths due to rabies. According to India’s own National Centre for Disease Control, rabies causes extensive morbidity and mortality in India and about 96 per cent of it is associated with dog bites. About 60 per cent of reported rabies cases and deaths in India occur in children and cause economic loss of USD 8.6 billion globally every year. The new action plan by the government will certainly put the rabies elimination efforts on fast track and achieve this objective through one health concept,” said Kamal Narayan, CEO, Integrated Health and Wellbeing (IHW) Council.