The initiative targets both education and health implementers, and is envisaged to facilitate an integrated approach to health programming and more effective learning at the school level 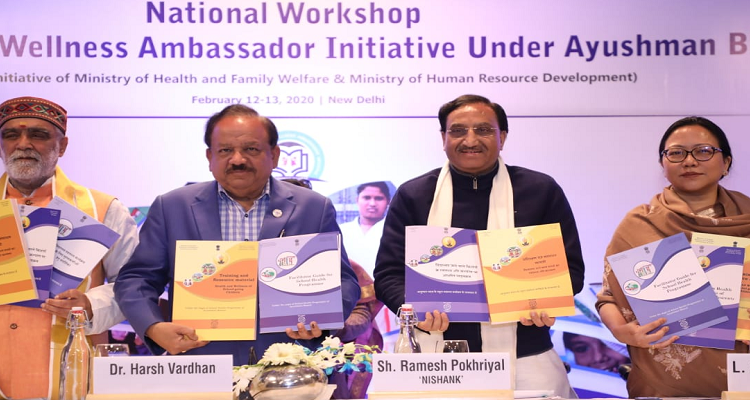 Speaking on the occasion, Pokhriyal said that the goal of ed­ucation is not only to increase the knowledge, but also to inculcate be­haviour which promotes consciousness about good health. He said that the teachers are the best mentors for the children and now they will also act as ‘Health and Wellness Ambassadors’ and will disseminate various key information by organising culturally-sensitive, activity-based sessions for one hour per week for 24 weeks in a year to promote joyful learning. The first phase of implementation will be in all the public upper primary, secondary and senior secondary schools of aspirational districts. Subsequently, remaining districts will be taken up in the second year.

He further informed that the School Health Programme (SHP) under Ayushman Bharat was launched on 14th April, 2018 by Prime Minister Narendra Modi in Bijapur, Chhattisgarh. This is a joint collaborative programme of MoH&FW and the Ministry of Human Resource and Development, Department of School Education and Literacy. The initiative targets both education and health implementers, and is envisaged to facilitate an integrated approach to health programming and more effective learning at the school level. Ministry of Human Resource and Development and MoHFW, along with National Council of Educational Research and Training (NCERT), has developed curriculum framework and training material for training of nodal teachers, in line with Sustainable Development Goals (SDG- 3).

The minister hoped that this initiative will help students to show good academic performance of the students as well as keep them healthy and enhance skills/counter issues which they may come across throughout their life.

Dr Harsh Vardhan stated that the efforts put in by NCERT for developing 24-hour curriculum, training materials for training of nodal teachers and facilitators guide were developed in consultation with MoHFW. Growing up healthy, emotional wellbeing and mental health, interpersonal relationships, values and responsible citizenship, gender equality, nutrition, health and sanitation, promotion of healthy lifestyles, prevention and management of substance misuse, reproductive health and HIV prevention, safety and security against violence and injuries, and promotion of safe use of internet, media and social media are the 11 identified themes.

In this new initiative, health promotion and prevention activities programme has been added in addition to the ongoing health screening programme through Rasthriya Bal Swasthya Karyakram (RBSK) teams and provision of services (IFA, Albendazole and sanitary napkins). While health screening and provision of services are ongoing activities, the newly added health promotion and prevention component will be implemented by two teachers identified in every school as ‘Health and Wellness Ambassador’. These ambassadors will be supported by class monitors as ‘Health and Wellness Messengers”’, Dr Vardhan elaborated.

The union health minister also stated that a National Resource Group (NRG) of 40 members has already been constituted by NCERT who have sound training skills and experience in adolescent health. The NRG will train the State Resource Group (SRG) which will comprise two persons each from SCERT, SIHFW and DIET from each selected district at the five Regional Institute of Education (RIE) at Shillong, Mysore, Bhopal, Bhubaneshwar and Ajmer.

Preeti Sudan, Secretary, Health and Family Welfare; Dr Rajiv Garg, DGHS; H Senapathy, Director NCERT, along with officials of MoH&FW, Ministry of Human Resource Development and representatives from the developmental partners such as Jhepeigo, UNFPA, USAID, UNICEF and WHO were also present on the occasion.