Nafiza from Oman is the youngest ever patient to undergo the surgery in India. She was suffering from a rare disease called DYT-16, a progressive abnormal posturing of limbs leading to complete dependence for daily activities due to generalised dystonia (abnormal muscle contraction) 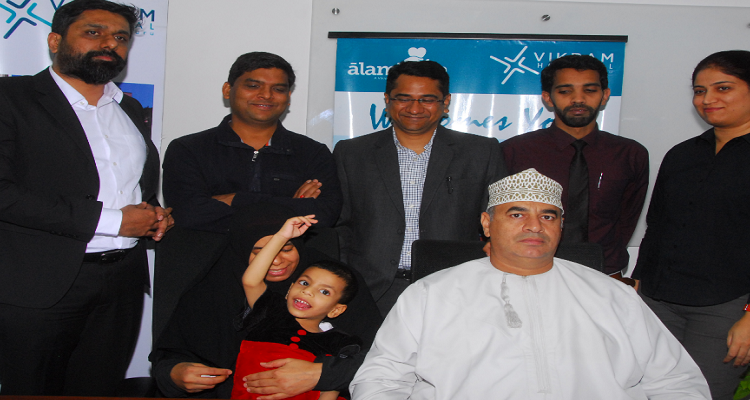 Vikram Hospital Bengaluru, rcently announced the successful accomplishment of an extremely complex surgery on five-and-a-half-year old girl from Oman suffering from a rare case of DYT-16, a novel young-onset dystonia-parkinsonism disorder, along with other complications. This feat is performed by the neuroscience department at Vikram Hospital, Bengaluru.

The child, Nafiza (name changed), was diagnosed to have a rare genetic condition called DYT-16, which is characterised by progressive abnormal posturing of limbs (medically termed as dystonia) leading to complete dependence for all activities of daily living (ADL). She is completely bed bound and dependent for all the activities of daily living. It is a rare genetic abnormality case with only about 10-15 cases documented worldwide. Patient is under the treatment and observation of a team of doctors from the neuroscience department consisting of Dr Prashanth LK, Consultant, Parkinson’s Disease and Movement Disorder Specialist; Dr Kiran Khanapure, Functional Neurosurgeon; Dr S Raghavendra and Consultant Neurologist and Epileptologist from Vikram Hospital.

The treatment involved surgical procedure for over seven hours called Deep Brain Stimulation (DBS). DBS is commonly done for parkinson’s disease patients. However, in addition to this, it is also done in other disorders like dystonia and tremors.

Elaborating on the criticality of the case, Dr Prashanth L. K, Consultant, parkinson’s disease and movement disorders specialist, Vikram Hospital, Bengaluru, said, “DYT16 being a very rare disease, treatment options are very limited and experiences are limited. In fact, DBS for DYT16 has been done only for four other individuals worldwide to date. After various options, we decided combinedly for a surgical intervention. Now, after one month of surgery, she has made significant improvements. We are hoping that her improvements will be much better in due time.”

Dr Kiran S Khanapure, Functional Neurosurgeon, Vikram Hospital, Bengaluru, said, “This case is critical for Vikram Hospital as being the first ever case of DYT 16 operated in India and also being the youngest child to undergo DBS surgery in India. Since the patient is five-and-a-half year old, the challenges are high as the implants done are mostly for adult patients. In view of her low weight and subcutaneous fat, we placed the DBS battery in the abdominal wall (as against to where we usually place, i.e. below the collar bone).”

Dr. Somesh Mittal, MD & CEO, Vikram Hospital, Bengaluru, also commented, “We are proud of our doctors for handling critical cases successfully. This case is one of the most sensitive and challenging cases for the doctors as DBS is mainly performed involving equipment that are used for adults, but after detailed planning by our experts, she underwent through the procedure with implantation of electrodes in her brain (the part called globus pallidus interna). Our expertise from the team of doctors helped take right decisions and enabled the parents to see new hope for their daughter.”

DYT-16 is usually transmitted in autosomal recessive manner (like consanguineous parentage or both parents having one abnormal gene) and is noted in the early childhood years. Currently, till date, very few families have been documented worldwide to have DYT16. In additoion, there is no specific curative treatment for DYT16 yet.