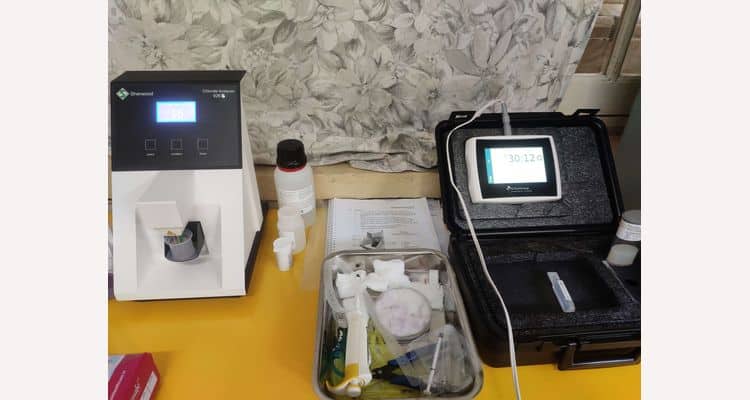 In a first, Bai Jerbai Wadia Hospital for Children introduces gold standard sweat chloride testing for children, adolescents, and young adults to confirm or rule out the diagnosis of cystic fibrosis. It is a progressive, genetic disease leading to persistent lung infections and breathing problems.

Cystic fibrosis (CF) as a genetic disorder impacting the cells involved in making mucus, sweat, and digestive fluids. The symptoms of CF are salty skin or sweat, sinusitis, wheezing, persistent cough, diarrhea, lung infections like pneumonia, bronchitis, and weight loss, greasy and bulky stools. A thorough diagnosis of cystic fibrosis in children and adults can help in achieving good outcomes, as treatment must be given soon to improve the survival rates and the course of the disease. To address this need, Wadia Hospital introduces sweat chloride testing to measure the amount of chloride in one’s sweat to detect this fatal condition as those with CF have increased levels of chloride in their sweat.

CF is a complex disease that takes a toll on the respiratory and digestive systems. Every year more than 100 new children seek workup and treatment for CF at Wadia Hospital. The department of Pulmonology at Wadia introduces Sweat chloride testing for patients with suspected cystic fibrosis. This is the state-of-art and most advanced way of testing sweat chloride levels in the entire Western region of India. This test is carried out in children, adolescents, and young adults with long-standing diseases like bronchiectasis, recurrent pneumonia, and failure to thrive amongst other symptoms, to rule out the diagnosis of Cystic Fibrosis.

Dr Parmarth Chandane who manages Paediatric respiratory department, Wadia hospital added, “One will be asked to undergo the tests when there is a family history of cystic fibrosis or symptoms pointing towards Cystic Fibrosis. Before this test, any creams and lotions should not be applied to the skin for 24 hours.  The sweat test can be helpful to determine the amount of chloride ion in sweat. Those with cystic fibrosis can have a high amount of chloride in their sweat. In a sweat test, the patient’s skin is stimulated to generate sweat that is absorbed into a special collector, the test gets over in half an hour and then the analysis is done. If the patient is detected with a high chloride level of more than 60 millimoles per liter, then there is a likelihood of cystic fibrosis. This gold standard test is relatively cheap and results are available immediately as compared to the genetic test (where the results will be available only after 3-4 weeks and come at an extremely prohibitive cost)”.

This is a gold standard test, no further testing for confirmation of diagnosis would be required. Once the diagnosis is confirmed then appropriate treatment will be suggested to the patient based on the symptoms.

“The Bai Jerbai Wadia Hospital for Children, Mumbai, India is the oldest Paediatric super-specialty training hospital in the country. Paediatric Respiratory department is one of the most recent additions to the institution and is a referral center for the State and also entire western India for children with complex and undiagnosed pulmonary diseases. The department of Pulmonology in Wadia Children’s hospital is equipped with a dedicated pulmonary function testing lab and a full-fledged Respiratory Clinic with Asthma OPD. On average, over 1200 children with various rare and complicated respiratory illnesses are attended to in the respiratory clinics along with Asthma and other chronic conditions each year; with many requiring procedures like spirometry and flexible bronchoscopy. Now, the introduction of Sweat Chloride Testing is a boon for patients with suspected Cystic Fibrosis as they will be able to get prompt treatment.  The hospital remains at the forefront of cutting-edge technology and handles complex situations with its skilled expertise. We hope that more and more patients seek to benefit from this sweat testing that causes higher morbidity and mortality in the patients,” concluded Dr Minnie Bodhanwala, CEO of Wadia Hospital