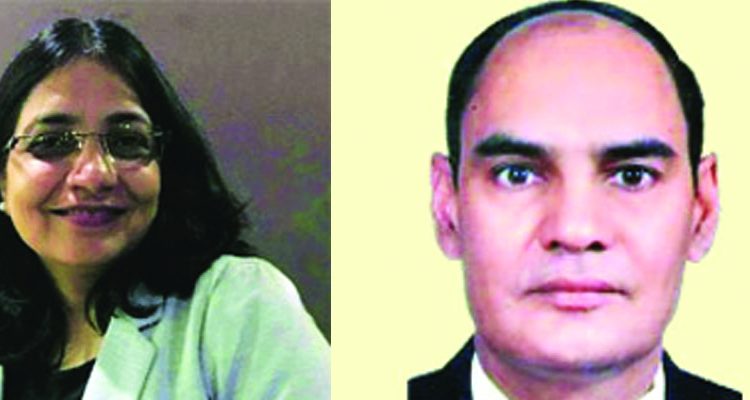 Cervical cancer or cancer of the cervix is the cancer of the entrance to the uterus. The cervix is the narrow part of the lower uterus, often referred to as the neck of the womb. Cervical cancer occurs most commonly in women over the age of 30. One of the most common symptoms of cervical cancer is abnormal vaginal bleeding, but in many cases, there may be no obvious symptoms until cancer has progressed to an advanced stage. Treatment usually consists of surgery (including local excision) in early stages, and chemotherapy and/or radiotherapy in more advanced stages of the disease.

Disease burden
Cervical cancer is the 3rd most common cancer among women worldwide, with an estimated 569,847 new cases and 311,365 deaths in 2018. There is a wide variation in the incidence of cervical cancer across the globe. In the west, early detection through regular screening has significantly lowered the incidence of this disease. On the other hand, developing countries continue to bear a huge burden of this type of cancer with 80 per cent of the new cervical cancer cases occurs in developing countries, like India, which reports approximately one- fourth of the world’s cases of cervical cancer each year.

Cervical cancer remains a formidable challenge in India with about 160 million women in the age group 30-59 years being at the risk of developing cervical cancer. Lack of awareness and negligent attitude towards their own health contributes to a high burden of morbidity and mortality due to this dreaded disease among Indian women where they seek treatment only after cancer has already advanced making treatment and recovery difficult.

The prevalence and burden of cervical cancer are much higher among women of low socioeconomic status as well as among rural women in India. The primary reason given for this is the lack of access to screening and health services and lack of awareness of the risk factors of cervical cancer. Human papillomavirus (HPV) infection and precancerous lesions go unnoticed and develop into full-blown cancer before women realise they need to go for medical help. Moreover, due to difficulties of access and affordability, compliance to, and follow up of, treatment is much worse for women of this social strata, leading to further morbidity and mortality.

The economic burden of cervical cancer is also enormous. It causes loss of productive life due to early death and prolonged disability. Additionally, the high medical costs that are incurred by families due to cervical cancer especially since most cases are diagnosed at advanced stages when treatment is costly but prognosis poor, further impoverish individuals and communities.

Prevention through cervical cancer screening
The enormous burden of cervical cancer is especially alarming because the disease is well preventable by screening women for precancerous cervical cancer lesions. Cervical cancer has a very long pre-cancerous period, generally 10 to 15 years. It provides a considerable window of opportunity to detect it and treat it completely. Early detection of the pre-malignant conditions allows the disease to be cured completely. If regular screening is made part of the routine check-up of all women who are susceptible, the onset of cancer can be detected and combated effectively.

The government has taken the first step towards increasing support for effective prevention by the formulation of ‘National Cancer Control Programme’ and by identification of ‘cervical cancer screening’ as one of the main goals of the state governments. However, cervical cancer control in the country still remains suboptimal.

A few state governments, such as Tamil Nadu, have initiated pilot screening programmes in collaboration with bodies like the World Bank. Several NGOs such as the Indian Cancer Society, Global Marwari Charitable Foundation, GAVI, etc. have also contributed to improving disease control. However, there is still no organised ‘national screening programme.’

Awareness of women regarding risk factors and screening, diagnosis and treatment options remain dismally low.
Exfoliative cervicovaginal cytology, also known as Pap smear, is the most widely used technique for cervical cancer screening. In this technique, pap smear collection is obtained from the cervix and the endocervical canal by the use of an Ayre spatula and cytobrush. Samples taken are then smeared on a slide and fixed. The inaccuracy of these tests is about 5 per cent to 10 per cent cases which has been related to wrongfully taking the sample due to poor technique of sample collection. The sensitivity of the Pap smear test is rated at 55-60 per cent and epidemiological data report suggests that it is unlikely to detect 60 per cent of the general cervical cancer cases.

Liquid-based cytology (LBC) is another method similar to that of the conventional Pap smear method although a special sample collecting device that collects exfoliated cells from the transformation zone of the cervix is used. The device is placed in a vial that contains preservatives. Although this technique provides more even distribution of cells with reduced cellular debris in the sample, there is no difference in specificity and sensitivity vs. Pap smear.

Visual screening involves direct inspection of the cervix without taking of samples and although it is less tedious in terms of preparation and inspection, it is considered much less accurate in identifying precancerous conditions.
HPV DNA screening aims at detecting virus associated with high-grade cervical cancers, but the technique is laborious and tedious and not very suitable for clinical use because it demands the use of fresh tissue which is not easy to conduct especially in mass screening programmes.

Even though all screening techniques and treatment modalities are available in India, access to and affordability of these pose major challenges. The cervical cancer screening coverage in India is abysmally low at just 2.6 per cent of the population. India also lacks organised Pap smear programmes and screening has not reached the vast majority of women in need. This is primarily due to the following limitations of Pap smear:

Thus, there is a need for a fast, effective and sensitive diagnostic test to screen and diagnose cervical cancer early for reducing the significant burden still existing in our country. 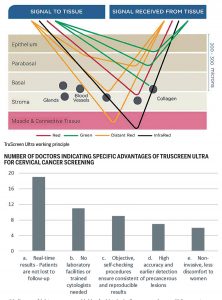 TruScreen Ultra – A novel, real-time cervical cancer screening device
TruScreen Ultra is a real-time solution for cervical cancer screening. It is a novel, technologically advanced device that utilises optoelectric technology to detect the precancerous change by optical and electrical measurements of cervical tissue. This portable device provides an effective solution for population-based screening in areas where laboratory facilities are scarce. The technique has been extensively proven with high accuracy results. A pen-like wand touches various spots on the cervix to pick up electrical and optical signals from the cervical tissue. A single-use sensor with precision lens and electrodes is used to interface with the cervix and protect against cross-infection. The TruScreen console collects the data and provides immediate results, enabling the physician to immediately plan appropriate patient care. Unlike the Pap test, tissue samples are not collected, which minimises discomfort, and therefore the patient is more likely to return for a repeat screen.

TruScreen Ultra working principle
A multi-centre trial by Singer et al. that was performed in 671 patients in 10 centres showed sensitivities for histologically confirmed precancerous lesions by TruScreen, Pap, and a combination of these two techniques as 70 per cent, 69 per cent, and 93 per cent, respectively. In the same study, the sensitivities of the TruScreen, Pap, and the combined test were 67 per cent, 45 per cent, and 87 per cent, respectively. Two recent studies also describe TruScreen as a good and objective method for cervical screening with high sensitivity results. The sensitivity of TruScreen was 86.1 per cent and the negative predictive value was 89.5 per cent.

TruScreen offers an alternative approach to cervical screening, resolving many of the ongoing issues with Pap tests including failed samples, poor patient follow up, patient discomfort and the need for supporting laboratory infrastructure. Being highly accurate, the TruScreen system provides an instant report, thus preventing the risk of losing contact with the patient because of the delay associated with the transportation of samples to laboratories for analysis and reporting.

TruScreen is also more acceptable to women than a Pap test because no cervical tissue needs to be taken during the test, meaning no or minimal discomfort, and real-time results are provided.

We conducted a sample survey of perception of gynaecologists towards TruScreen Ultra for cervical cancer screening in India. A total of 52 doctors were surveyed including those practising at their own private nursing homes, corporate hospitals, government hospitals and doctors have their own independent practice.

Neuberg Diagnostics expands footprint with the launch of 10 new labs