Minister of External Affairs releases book on fight against leprosy

The book, “No Matter Where the Journey Takes Me”: One man’s quest for a leprosy-free world talks about his journey and a detailed overview of the modern history of the fight against leprosy 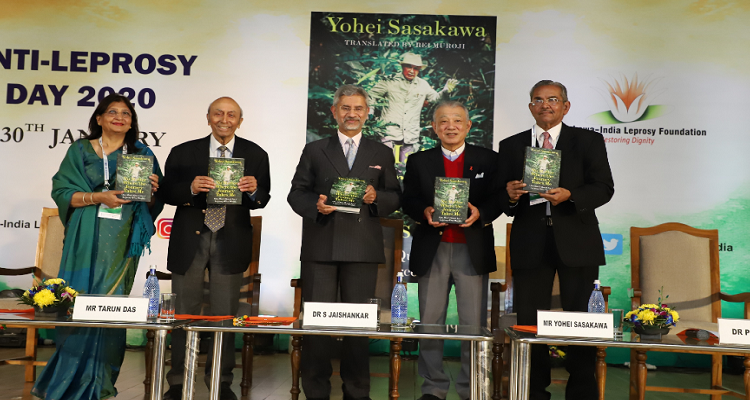 Minister of External Affairs S Jaishankar recently released the book “No Matter Where the Journey Takes Me: One man’s quest for a leprosy-free world written by Yohei Sasakawa, WHO Goodwill Ambassador. The book talks about Sasakawa’s journey as the global ambassador for leprosy. Present on the occasion were NK Singh, Fifteenth Finance Commissioner of India and Tarun Das, Chairperson, Sasakawa- India Leprosy Foundation.

In his book, Sasakawa describes how his father’s compassion for those with leprosy began when he was a young man and had feelings for a beautiful girl living in the village where he was born. Then, one day, this girl vanished and he later understood that her disappearance was because she had developed leprosy and had been sent into isolation to join others who had the same condition. This led to a lifelong commitment to eliminate leprosy- a dream that Sasakawa made his own.

On the occasion, Jaishankar said, “I am thankful to Sasakawa for allowing me an opportunity to be a part of this launch on such a special day. The challenge of leprosy is deeply related with Mahatma Gandhi’s life. This book is an expression of his journey and how he has helped many across the globe. His journey makes you pause and think about the challenges of the people affected with leprosy and urges you to come together to make life easy for these people by various actions including, and very importantly, stop discriminating. Leprosy is a global challenge and Sasakawa has committed himself to eradicating it. He is a true inspiration and we as a country, value his contributions immensely.”

Speaking on the occasion, Tarun Das commented, “I feel honoured to be present at the launch of the book written by Yohei Sasakawa. I have worked closely with Sasakawa and applaud his commitment towards the cause. The book is an insight into his journey and will resonate very well with not just people affected by leprosy, but also their families. The book will also motivate people to join the cause and help to eradicate the stigma against leprosy.

Expressing his happiness, Sasakawa said, “I am happy that my book is being released in India. This book covers my journey against stigma towards persons affected by leprosy and their families. Education and awareness around leprosy is very limited, resulting in persistence of myths against the disease. India is currently running one of the world’s largest programmes for the eradication of leprosy, the National Leprosy Education Programme (NLEP).”